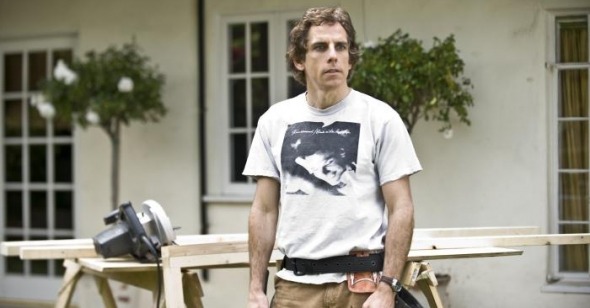 There are those who claim that Punch-Drunk Love begs to be read as a deconstruction of Adam Sandler‚Äôs screen persona. While they might be right, it doesn't make Paul Thomas Anderson's dull slab of powder-blue whimsy any more bearable. So when I say that Noah Baumbach's latest film, Greenberg, feels like a culmination of sorts for its star, Ben Stiller, that's not in and of itself a ringing endorsement, although it‚Äôs certainly superior to the writer-director‚Äôs previous Margot at the Wedding. In that film, another Frat Pack satellite‚ÄĒJack Black‚ÄĒwas asked to show depths beyond his famously satyric screen persona. He failed, but then so did almost everything else in Baumbach's faux-Chekhovian inventory of sisterly antagonism.

Even worse than its strained metaphors (a rotting family tree!) were its misguided attempts at self-reflexive, class-based satire. Take, for instance, the scene where Zane Pais‚Äôs gangly teen gazes unbelievingly through a fence at the feral, hog-wild activities of the (poorer, it‚Äôs implied) family next door. It‚Äôs a bad joke that backfires on the director, rather than the characters, or, more importantly, the audience. Baumbach's operations are more effectively double-edged in Greenberg, and not because the filmmaker has decided to take more than a peek around the corner of that figurative social-economic divide. Aside from shifting the backdrop to Los Angeles (photographed in harsh, anxious tones by the ever-adaptable Harris Savides) Greenberg feels entirely of a piece with films like Kicking and Screaming and Mr. Jealousy‚ÄĒtwo more hours spent in the company of jaded, hyper-articulate creeps and the passive women who love (or at least fuck) them. It's no mean feat of critical acuity to point out that Stiller's Roger Greenberg‚ÄĒan embittered subculture refugee whose idea of starting over after a stint in a psych ward is to hide out in his wealthy, successful brother's palatial L.A. home while the latter is vacationing with his brood in Vietnam‚ÄĒcould be one of Baumbach's screwy kids all grown up.

That Greenberg‚Äôs a more credible creation than Nicole Kidman's Margot monster, who registered as a mere pretense for the measured contortions of a famous porcelain countenance, has less to do with the role's particulars‚ÄĒRoger torpedoed his band's record deal back in the Eighties and has drifted aimlessly but bitterly ever since‚ÄĒthan the actor's willingness to push the parameters of his personal comfort zone. Stiller's sweet spot as an actor has always been the transition between quiet self-righteousness and the over-compensatory explosion of those principles: in films great (There‚Äôs Something About Mary) and otherwise (you name it), he‚Äôs played nebbishes surrounded by grotesques who justify his ire. The difference in Greenberg is we're not being cued to share his character's irritation with the people around him‚ÄĒor at least not at the people who emerge from the background blur of blithe West Coast types. Both Rhys Ifans, as the former band mate trying to overturn his own pear-shaped fortunes, and Greta Gerwig, as a young woman inexplicably drawn towards Roger, are entirely sympathetic figures.

That said, there is something about Ms. Gerwig that seems to bring out a lot of (male) critics‚Äô inner Greenbergs. Her blank, moony performance style has made her the Annie Hall of the mumblecore set, and, accordingly, a lightning rod for all manner of critical cruelty (including my own; I felt bad when I said to a colleague that her brief, and indelibly terminated, role in Ti West's awesome schlock-riff The House of the Devil could double as a piece of film-critical shorthand). But besides being her highest-profile role to date, Gerwig‚Äôs turn in Greenberg becomes resonant when viewed in light of the film‚Äôs overall structure. Her character, Florence‚ÄĒwho works as a personal assistant to Roger‚Äôs brother, a job that entails equal amounts of nursing and toadying‚ÄĒis our entry point into the film; Greenberg opens with a shot of her hiking against the almost lunar terrain of the San Fernando Valley before cutting to a driver‚Äôs side close-up as she navigates traffic to the accompaniment of the Steve Miller Band's ‚ÄúJet Airliner.‚ÄĚ ‚ÄúYou won't let me in," she mutters under her breath, obviously in response to the other drivers around her but also with some foreboding: her impending relationship with a stunted, self-loathing older man will leave her feeling similarly shut out.

We stay with Florence for the film's first ten minutes as she tends to her employers‚Äô departure (‚ÄúYou need to speak up,‚ÄĚ say Mrs. Greenberg when Florence demurs immediate payment) heads out to a party and hooks up with a random dude (‚ÄúThis isn't a relationship,‚ÄĚ says her smiling partner by way of inviting her into his apartment). Besides offering a pr√©cis of a kind of postadolescent stasis, these scenes establish Florence as utterly pliable, and thus an easy target for Roger Greenberg, whose surface vulnerabilities‚ÄĒhe can‚Äôt drive a car, which makes him an invalid in Los Angeles‚ÄĒbarely mask manipulative tendencies. Watching him all but force his way into Florence‚Äôs apartment (after she‚Äôd given him a lift) and initiate an aggressive seduction is uncomfortable, partly because it goes so badly (via the most awkward screen cunnilingus since Scary Movie), but mostly because the dynamic seems so natural for both parties: both seem to take Roger‚Äôs inappropriateness‚ÄĒand her passivity‚ÄĒas being par for the course.

A lot has been written about Baumbach‚Äôs fondness for intricately arranged dysfunction, and there is something a little bit sadistic about creating two such painfully codependent pathologies and bouncing them off of each other at feature-length: ‚ÄúNo, you don‚Äôt!‚ÄĚ thunders Roger when Florence says that she likes him, presaging a vicious exchange where he frames their almost hilariously unromantic dalliance as a further example of him wasting his life. But in committing to a two-sided character study, Greenberg registers as more generous than either The Squid and the Whale (a memory piece that surrounded its authorial surrogate with upper-middlebrow caricatures) or Margot at the Wedding, his most baldly cruel work to date. Greenberg stumbles badly towards the end when Roger‚ÄĒfueled by the substances imbibed at his teenage niece‚Äôs Can‚Äôt Hardly Wait‚Äďstyle house party and a vicious falling out with Ifans‚Äôs character‚ÄĒimpulsively decides to fly to Australia with a pair of young female companions. It‚Äôs such an obviously stupid choice that the viewer simply waits for the epiphany that will snap him out of it. And when it comes, it‚Äôs so banal and Sam Mendes-ish as to almost invalidate the emotional effect of what follows.

[Spoilers ahead.] Almost, but not quite. Whether or not Greenberg really earns its final scene is debatable, but Baumbach‚Äôs antiresolution‚ÄĒbesides being more than a little bit reminiscent of Before Sunset‚ÄĒsucceeds in lending this ungainly and (only partially designedly) enervating film some heft. ‚ÄúThis is you,‚ÄĚ whispers Florence as she checks her cell phone for a message that Roger had left her the night before‚ÄĒduring which time she had been convalescing in the hospital, while he was doing coke with kids half his age. Baumbach cuts to black at the instant that she begins listening, knowing that we‚Äôve already heard its contents earlier in the film. We don‚Äôt get to see what she thinks of Roger‚Äôs rambling, recriminatory voice-mail-of-the-soul, and the fact that I‚Äôve caught myself wondering at the outcome in the days since I saw the film suggests that it might even matter.