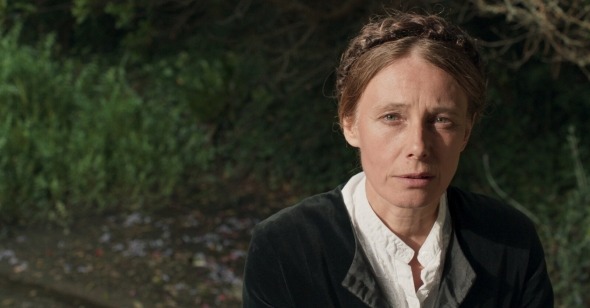 Letters to Leo
By Esther Rosenfield

We think we know what a Frederick Wiseman movie looks like. Out of the 45 feature films he made up to this year in his 55-year career, 43 of them have been documentaries, known for their direct, observational approach, depicting isolated scenes of human behavior without explicit commentary. In many ways, his 46th film, A Couple, feels like it belongs squarely within his expansive canon, but it takes a form he has rarely engaged with. A Couple isn’t a documentary, making it only Wiseman’s third non-nonfiction feature. While one can’t claim his other films blur the lines between fiction and non-fiction, his work has always approached reality from a storyteller’s point of view. In 2020, the New York Times suggested that Wiseman was the “Great American Novelist” for the way his body of work, taken as a whole, represented an overarching and complex portrait of American life. A Couple isn’t about America or Americans, but it paints a striking picture of the societal strictures which rule our daily lives.

Like his two previous non-documentary films, Seraphita’s Diary (1982) and The Last Letter (2002), A Couple is a one-woman show, a concession made when Covid lockdowns made a large-scale documentary shoot impossible. The hour-long A Couple (very nearly the shortest in a career of prodigious runtimes) adapts the diaries and letters of Sophia Tolstoy, wife of author Leo Tolstoy, into a series of monologues about their life together. French actress Nathalie Boutefeu plays a version of Sophia, seemingly plucked out of time and given to wandering a coastal garden on the island of Belle-Île off the coast of France, reading excerpts from her diary and her letters to Leo from over the course of their relationship.

A Couple adopts the rhythm of Wiseman’s documentaries to a much greater degree than Seraphita’s Diary or The Last Letter. His nonfiction films often feature a binary structure alternating between set pieces and ambient montage. The set pieces are scenes of dialogue and action, and they are buffered by atmospheric sequences of natural surroundings and contextless activity. A Couple moves in the same way, floating in and out of Sophia’s monologues to focus on a flower, a frog, a crashing wave. While this paired structure gives his documentaries a reliable rigidity, A Couple feels more elliptical. The monologue segments flow back and forth through time like an unmoored stream of consciousness. Sophia always seems to speak retrospectively, as an older woman full of regret and even scorn for her younger self. The real Sophia outlived Leo by nine years, and the ease with which the film’s version voices her spite for him suggests a woman whose only freedom from the pressures of marriage came when her husband died.

Wiseman often chooses clear, pretenseless titles (Model, Welfare, Hospital, City Hall etc.). Watching them, though, one gets the sense that most could take the name of his 1976 film Meat. His more unsparing films depict society as an endless grind of pain, hypocrisy, violence and death from which human connection and understanding is little solace, if indeed it can be achieved at all. In A Couple, too, we see how the burdensome expectations of being both wife and husband in the late 19th century crushed every bit of the Tolstoys’ genuine affection for one another. The strain of playing the roles society prescribes for us is one of Wiseman’s most consistent themes. In only his second film, High School (1968), Wiseman depicted authority figures disallowing students from expressing individuality. A frequent question raised in discussion of documentaries, and particularly Wiseman’s given their direct aesthetic, is whether the simple fact of being filmed influences people to act inconsistently, to perform rather than be natural. This critique fails to grasp that so much of Wiseman’s project is to show how we are all performing, all the time. It’s ironic that it took an ostensibly fictional project for him to depict someone breaking free of the performance which has defined her life, voicing private thoughts that she would never say in public. It is only outside the boundaries of everyday life that someone like Sophia can speak honestly about her experiences. Even the nature of Boutefeu’s performance, as a French actress playing a Russian woman, calls to attention the fabrication of the proceedings.

A Couple could be uncharitably described as repetitive; Sophia returns again and again to the ways her husband wounded and slighted her, and even at a mere hour of runtime the film can feel as though it’s retreading old ground. But the film is slipperier than these repetitions initially make it seem. Boutefeu’s gaze is constantly shifting. Sometimes she speaks aimlessly to the world around her, other times she looks just off-camera as though she’s being interviewed. In the film’s most startling moments, she looks directly into the camera, something Wiseman takes care to avoid showing in his other, nonfiction films. While Wiseman’s documentaries are full of extemporaneously delivered monologues, her stare in these moments creates a comparatively confrontational dynamic. We are not voyeuristically listening in on this woman speaking, but rather being made the target of her speech. This is the biggest demand Wiseman makes of his audience with A Couple, which implores us to hear rather than just listen.