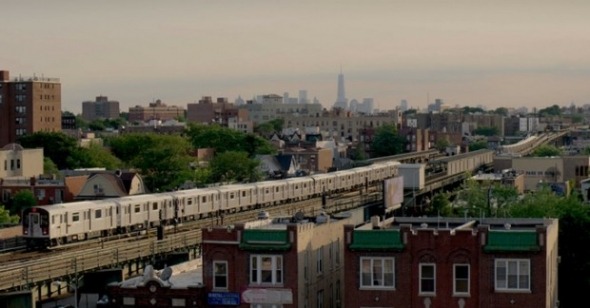 The People in Your Neighborhood
by Chris Wisniewski

The title starts with a preposition. Because Frederick Wiseman’s films usually eschew even the subtlest hints of an authorial presence—title cards, talking heads, commentary, nondiegetic music—the preposition is not insignificant. In Jackson Heights is Wiseman’s newest film and is the only, other than At Berkeley, to have such a bold directorial intervention in its title. Many of Wiseman’s movies examine communities and institutions and the people who live within, populate, or pass through them. So it is with In Jackson Heights. Yet none of Wiseman’s subjects quite compare to this movie’s eponymous western Queens, New York City, neighborhood, perhaps because Jackson Heights is in itself sui generis. A thriving, growing, and changing urban epicenter where over 160 languages are spoken, Jackson Heights is arguably the most diverse neighborhood in all of New York City. Consequently, it would not be an exaggeration to suggest that this one corner of Queens may well be amongst the most diverse places on earth. Jackson Heights is not a coherent, monolithic community and certainly not an institution in any meaningful sense. Instead, it exists as a sort of agglomeration of many micro-cultures, hyper-local constituencies, organizations, and lower-case “i” institutions that abut each other in surprising, challenging, and thrilling ways. Wiseman could not do this place justice by making a film called, simply, Jackson Heights, because Jackson Heights is not a thing to be apprehended from the outside. Rather, it is a place to be in, something that one can only grapple with by immersing oneself in its contradictions and shifting landscape.

It may not be surprising that Wiseman, who at this point deserves the label “living master” without qualification, succeeds beautifully in this task, but the seeming ease with which he thrusts his viewers into this teeming landscape is nevertheless remarkable. In Jackson Heights opens with two sequences that appear at first to stand in opposition to one another. In one, an imam recites a Ramadan prayer to a group of faithful Muslims (and one sleeping boy). Wiseman follows this opening with footage from a political fundraiser at a Jewish community center for the neighborhood’s openly gay City Council Member, Daniel Dromm, on the occasion of the Queens pride parade (full disclosure: I was at the event, and was taken by surprise to find that I appear in the back of several shots). On superficial terms, these two gatherings might as well be worlds apart. That they take place within several blocks of one another—and that Wiseman juxtaposes the two sequences—underscores the very diversity that defines Jackson Heights and that Dromm mentions in his speech.

The Ramadan prayer and the pride fundraiser also establish, in a certain sense, church and state as pillars of this community. Insofar as Wiseman has a track record of deftly depicting institutions such as these and how they effectively shape daily life, one might argue that these opening vignettes have unique significance. They might serve to reveal the superstructures that exist behind the crowded blocks around Roosevelt Avenue. That’s only partly true, though. The Ramadan prayer, for example, takes place in an unassuming setting that looks more like a makeshift community center than a proper mosque. As Wiseman’s camera surveys Dromm’s supporters at the Jewish community center, meanwhile, one gets this sense not of political powerbrokers but of a broad coalition of neighbors that cuts across ethnic, racial, and class lines. Rather than suggesting superstructures, Wiseman gives the impression of a neighborhood made up of innumerable overlapping groups.

Wiseman doesn’t give his viewers a roadmap—that would be impossible—so instead he surveys. To the extent that In Jackson Heights has a through-line or central characters, it may be Dromm and his staff, who in going about their work for the City Council necessarily engage with a wide swath of the community. They take complaints from constituents about a new homeless shelter that’s been opened by emergency order of the City. They work with concerned parents to address issues of school zoning. They attend community board meetings about traffic laws. This is the day to day of local government, and it has less to do with wielding power over a constituency than it does with listening and responding to it.

Jackson Heights, in Wiseman’s film, is not built by systems but rather by people. The dramatic interest here is human; the political is personal and vice versa. Throughout, Wiseman intersperses footage culled from local businesses like laundromats, ethnic restaurants, eyebrow threading establishments, tattoo parlors, and pet groomers. These small businesses are run by individuals and families and coexist in an economic landscape also populated by a Gap Factory Store and other chains, and their owners fret about the rising rents brought on by gentrification and the potential impact of the creation of a Business Improvement District in the neighborhood. These threads connect macro urban trends and municipal policy to the fabric of daily life and the livelihoods of the people we meet.

In Jackson Heights takes the time to spotlight people who might otherwise seem to exist on the margins. In one sequence, an elderly woman at a senior center reflects on her advanced age and the loneliness she has experienced since her husband died. This is followed by a Spanish language protest by members of the LGBT community that culminates with a story from a trans woman about how she was discriminated against at a local restaurant. The film pays special attention to seniors and LGBT issues, but it is, above all, a great and profoundly moving depiction of the immigrant experience. The social service organization Make the Road New York figures prominently in the movie, and in its walls, we hear harrowing stories of border crossings and also watch more mundane education, training, and support programs in action. We hear numerous languages spoken over the course of the film’s three-hour-plus running time, but the people we meet aren’t intended as representatives of specific ethnic groups. Each has a personal story to tell, and to the extent that their words have a political dimension, which emerges from their individual experiences. In a political moment fraught with racist and xenophobic attitudes toward the immigrants who live and work in our neighborhoods and cities, In Jackson Heights plays as rebuke and antidote.

The film’s only artifice is structural. In Jackson Heights proceeds from daytime to nighttime scenes in three cycles, and depending on how one reads this, one might come away with the impression that Wiseman has given it the shape of three days. But it is clear, from the vastness of its scope, that In Jackson Heights has been culled from footage shot over several months. Nevertheless, the conceit works. It implies, fairly, that this intimate but epic film is really just a snapshot, that it offers only a fragment. Along the path of the number 7 train that runs across the neighborhood’s main thoroughfare are thousands more people who speak countless languages we never hear over the movie’s 190 minutes, all with their own hopes, fears, anxieties, and aspirations. They live in a neighborhood unlike any other, but the more Wiseman shows us this place—the closer we look at Jackson Heights, or rather, in Jackson Heights—the more familiar it feels.