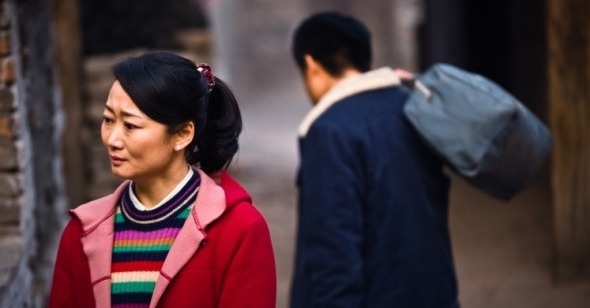 Time Is Money
By Michael Koresky

“Money makes the world go ‘round and ‘round and down the drain,” sings Neil Hannon in the Divine Comedy song “The Complete Banker.” Most artists would probably agree. But it hasn’t proven easy to portray such sentiment in a narrative film in a way that doesn’t amount to a simplistic harangue (the recent At Any Price or Margin Call or Cosmopolis, films of varying worth and intellect, all make their broad points by focusing on the machinations of villainous personifications of greed). Jia Zhangke’s been making films questioning the social value of capital and what it means to Chinese history for over a decade now, and in the process has become one of the world’s great economic temperature-takers. He has done this by focusing on the interactions between people caught up in the large social shifts dictated by the global market. Jia’s films acknowledge, in nuanced ways, that money imperceptibly swirls around us at all times, like germs in the air, while we remain in fixed states.

The main characters in Jia’s latest, Mountains May Depart, are such people, moving inexorably, helplessly toward disillusionment and alienation even as they seem to be always standing in more or less the same spot: at the edge of a precipice. As he’s proven in such films as Platform, The World, and Still Life, Jia is unparalleled in today’s cinematic landscape at creating quietly multifaceted characters who seem small even as they stand in for his country’s large cultural shifts. Here, Jia is aiming for something warmer and more expressive, a film that keeps trying to be a big, romantic family melodrama but gets continually distracted and torn apart by the caprices of time and capital. This is all written on the face of the inward yet endlessly expressive Zhao Tao, the director’s wife and recurrent muse. Here she’s cast as the fulcrum of a young love triangle that also includes entrepreneur Jinsheng (Zhang Yi) and coal miner Liangzhi (Liang Jindong); in the first section of this ever-shifting film, these three play off of each other with youthful, twenty-something abandon, even as it’s clear they’re destined for different things. Launching on a colorful 1999 New Year’s Eve in Fenyang with a dance sequence set to the vibrant rhythms of the Pet Shop Boys’ “Go West,” the first section of the film depicts a newly consumerist China flush with money. Liangzhi may be struggling, but everything around him seems bursting with possibility, especially Jinsheng, who boasts a shiny new Volkswagen. The tone is buoyant, but there’s something ominous, even constricting about the film in this extended early chapter, and it’s captured vividly in a long shot of a crowd of people, tightly packed together and swaying in unison as though caught on some undulating, unstoppable wave.

The film is always opening out, even literally: the first section is shot in a tight, vertical 1.33:1 frame; the second, set in 2014, in wider 1.85:1; and the third, in an imagined 2025, creeps all the way to 2.35. According to Jia, the decision for these switches grew out of practical concerns, as he wanted to easily integrate full-frame mini-DV documentary footage he shot in 2000 and widescreen footage of the coal mining industry he had captured in 2014. It has a paradoxical emotional effect as well, however: ever more expansive though the film may grow, Mountains May Depart only becomes increasingly intimate and sober, naturally moving to the rhythms of its characters.

Though she is not constantly on-screen, Tao’s decisions fuel the film, and its spirit of encroaching disappointment and estrangement belong to her. Girlish and naïve, Tao makes the predictable life choice to marry the ambitious, moneyed Jinsheng over the more modest worker Liangzhi, a move that is perhaps more cynically forward-thinking than based on genuine affection, yet Jia never frames it as a mistake or in simply ironic terms. If Tao were portrayed as in any way mercenary, the film might have become a just-desserts narrative that would have significantly diminished its humanity and power. She’s acting out of the kind of basic pragmatism that rules most of us, and it’s this no-nonsense approach that also pushes Jia’s narrative. The film gradually makes clear its shape and purpose, accumulating purpose and regret, moment by moment, just like our lives.

In an audacious move, the entire first section of the film, running to nearly an hour, is constructed as a pre-title prologue. This signals that Mountains May Depart is about the present. Fifteen years pass, in which time Tao has had a child with Jinsheng, though she and her husband have since divorced. Jinsheng, now a big shot who owns an oil company, has retained custody of young Daole (whom his father has renamed Dollar) and the two live in Shanghai, while Tao has stayed in Fenyang. The gray, desolate tone and atmosphere of this middle chapter, however, seem to emerge from Liangzhi, who has returned to the city after years of toiling in coal mines with rapidly advancing lung disease (which leads Liangzhi’s wife to approach Tao and ask for money for his doctor’s bills, in the film’s most despairing scene). Death also looms over Tao, who is devastated when her father passes away, although does bring Dollar briefly back to Fenyang for his grandfather’s funeral. Calling Tao “Mummy,” much to her chagrin, Dollar seems to be poised for a completely Westernized future, as Jinsheng, who has begun to go by the name Peter, is relocating with the boy to Melbourne. In a poignant sequence, Tao tries to instill in him a modicum of family tradition by showing him how to make dumplings, which is especially moving in retrospect when we realize this is one of their final shared moments.

The final section of Mountains May Depart is, aptly perhaps, the most ill-fitting. Set eleven years in the future, in a shimmering if impersonal Australian metropolis that’s far from the dingy, charcoal tones of contemporary Fenyang, the film here alienates the viewer not only from time and place but also from language (the remainder is mostly in English) and the narrative proper itself. Tao is out of the picture; Liangzhi is presumably dead. Now in college, Dollar (Zijan Dong), emotionally estranged from his neglectful, paranoiac fat-cat father (Zhang Yi now sports grey temples and an emphatic mustache), seeks solace in the intellect and arms of his middle-aged teacher, Mia (Sylvia Chang), who is clearly a physical and emotional stand-in for the mother he has been separated from for over a decade and whom he cannot remember. The only memento he has of his former life in China is the house key he still wears around his neck, a constant reminder of his displacement. At one point, Dollar asks the older woman to literally translate and therefore help him communicate with his father, sitting in his imposing glass house behind a coffee table littered with firearms, which he stockpiles with the insane zeal of a miserly shut-in. (“I own a pile of guns and no one to fire them at,” complains Jinsheng, perversely trying to describe his lack of personal freedom in 2025.) Eventually Dollar and Mia, herself an immigrant from Toronto by way of China, take off together from Melbourne to destinations unknown.

Leaving Tao off-screen during this section is a potent reminder that her presence grounds Mountains May Depart; like Dollar, the film is unmoored without her. Having to rely entirely on imagination rather than the formidable powers he has proven in observing the present, the filmmaker falls back on contrivance and hackneyed dialogue to make his points. Admittedly, it doesn’t help an English-speaking viewer such as myself to hear such eye-rolling dialogue as “It’s like Google translate is your real son!” or “The hardest thing about love is caring.” At another moment, Dollar says aloud that he feels an odd sense of déjà vu sitting aside Mia in her car, a brazenly obvious spelling out of his lover’s role as surrogate for his absent mother. However, the sudden tendency to shout out his film’s themes is somewhat in keeping with the tactics of a director given to the occasional grand gesture: earlier in the film there’s a surreal but metaphorically direct image, seen off-handedly by Tao, of a plane flying into a small mountain; there’s a pointed shot of a stalled coal truck; and, of course, there’s the aforementioned opening “Go West” musical sequence, the meaning of which doesn’t require a particularly perspicacious viewer to discern. This song returns at the film’s close, in a fanciful, melancholy coda that brings us back to Tao. Now, though, because we have been privy to the gradual loss of language, culture, and family, the obviousness of the gesture matters little. Time has given it meaning.