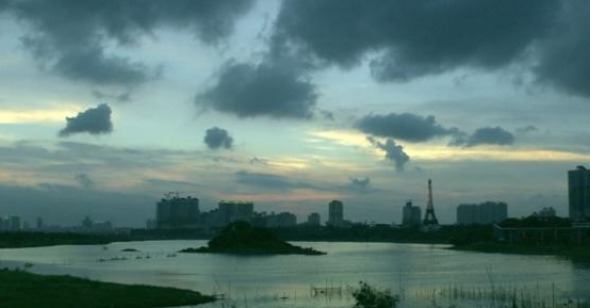 Save the Date
Mark Asch on The World

If I care more about fashion than I did ten years ago, it’s mostly attributable to the movies. I don’t mean just in the Pauline Kael sense, that I found in the movies a design for living. What I mean is that over the last ten years, it’s the movies that have most helped me to better understand something very important to me, and germane as well to Reverse Shot on this milestone: the movies have taught me to think of myself— myself at age 18 or 23 or 28—as having been an articulated component of a moment now passed.

Here’s an example of what I’m talking about: in The Informant!, set in the mid-nineties, Matt Damon sports eyeglasses with large rounded-rectangular lenses and thin gold frames; medium-wide silk-poly blend floral-patterned ties; and hair parted to the side with Pert Plus–commercial amounts of volume—exactly the look a ten-to-thirteen-year-old Mark Asch was accustomed to rocking at formal family functions during the Gingrich speakership. Except that Damon is wearing them as period indicators. I had no idea, when I was living through them, that the mid-to-late 1990s looked like anything at all, so I thank the movie profusely for showing me. If I’m more indulgent of trends now than I used to be, it’s because I now know to anticipate the day when blue canvas sneakers, cutoffs, and a pink tank top will scream “summer 2012” just as loudly as Leo DiCaprio’s proudly anachronistic Brit-pop bangs in Titanic now scream “1997.” There’s no such thing as a neutral aesthetic.

Or maybe this entire realization is just a natural part of having actually occupied multiple distinct moments in time, something which only becomes true and evident gradually—but even still, once you get to that realization, it’s a chief delight of cinema. Even film criticism itself increasingly appeals to me as a repository for pasts perfect in their clarity: in the timely political innuendos from old Village Voice reviews, in the psychiatrist jokes in the cartoons alongside Kael’s reviews in old New Yorkers, in the upstart wit of the old Reverse Shot blog’s IM-reviews circa summer 2005.

And it’s not just that the movies and movie culture are a log of the zeitgeist. This sort of datedness is embedded in the texture of the moving image itself. Think about the Technicolor, ’scope road shows of the 1950s, and their visions of the good life, as panoramic and oversaturated as the Kodak Coloramas at Grand Central Terminal. Think about the posed, silvery silent actualities and Edison shorts, with a novel photographic process and attractions foreign and domestic exhibited in their fin-de-siècle Sunday best. Think about the harsh, agitated newsreel quality of sixties guerilla 16mm or the Bakelite pop of brand labels photographed at the same time by Raoul Coutard.

Then, too, there is the way the gap between us and a photographed image becomes physical and verifiable. The imperfections that accumulate on film prints are like a form of carbon dating. Cherishing this graceful degradation of the image is an attitude more complicated than finding easy nostalgia in another era’s now-quaint technology. It’s a way of understanding a particular time—the time when the movie you’re watching was made, and maybe the person you were the last time you watched it—as being both bounded and elusive. It’s one particularly tangible manifestation of the trade-off between immediacy and perspective that we make, a little more irrevocably, every day. Something like all of this, I suspect, is at the heart of what filmmakers at a retrospective or critics at a press screening mean, when they say they “just want to take a look at the print.”

Now then. The transition from celluloid to digital is surely the signal change in cinema over the lifespan of Reverse Shot (just as the transition from print to online over the same period is for film criticism, though I find it rather laudable, in retrospect, how early and definitively this publication made the transition to online only following its first year of dare-I-say fabled print editions. And those of us who find this whole development to be worrisome have several things on our minds—general truculence, a legitimate concern for all the titles that inevitably drop out of circulation upon any format switchover, etc, etc. But what concerns me most is what I’d like to call the pastlessness of the digital image: the frictionless, ahistorical quality of its images, with no grain to catch on to, so that whatever is filmed has the appearance of a decades-old article in the current page layout of the website where it’s archived, with “contextual ads” providing no context at all save an up-to-the-second model of yourself. Or perhaps—given the fluorescent-flicker palette of worn-out action movie VHS tapes redolent of an era of cheap mass production, and even the YouTubular resolution of millennial micro-indies at the dawn of camera-phone reflexivity—it would be better to say, “the pastlessness to which the digital image seems to aspire.”

This, anyway, is the question—and so in thinking about a film from the last ten years that gives me hope for the next, I wanted to find some kind of reassurance that, even if most films will soon cease to exist as any kind of physical object altogether, they might still appear, to the future viewer, as dated as any saturated and seamy 35mm print. I’m looking to be reminded, in other words, that there’s no such thing as a neutral aesthetic.

And behold: Jia Zhangke’s The World—the Chinese independent filmmaker’s first urban, state-sanctioned feature, about the lives of low-skilled workers at Beijing’s World Park—shot on high-def digital video, looks, incredibly to this Luddite, personal, idiosyncratic and already inextricably tied up in its moment (though it was transferred to 35mm for its initial theatrical appearances, you’d have to bet against seeing those prints projected any time soon). Light sources are diamond-hard, pure points of brightness, and give off an ambience that seems to land on adjacent surfaces and atmosphere like a distinct physical layer, a coating of luminescence (or pixels). This is the unmediated objectivity of the digital image, at least circa 2004: windowless subterranean dressing rooms and the night air around neon signs are filled with a yellow you could almost swim in, and faces glowing out of the dark appear coated with luminous masks.

Here as in several of their more recent collaborations, Jia and his redoubtable DP Yu Lik-wai tilt their view skyward, to the incredibly, almost delicately gradiated thunderclouds over a city skyline. And I don’t know whether it’s Beijing smog or resolution problems, but the sky outside windows is blown-out to white throughout the movie. Another recurrent shot familiar from the Jia filmography: in worker dorms with cement walls covered with thin, slick-shiny plaster, characters sit quietly facing each other at tables piled with pots and pans, bottles and incense, and the steam from their tea or smoke from their cigarettes curls upwards and gets lost in the haze, mingling with the light as surely as Jia’s photographic process, recurrent formal preoccupations, and historically specific milieu all converge in such moments.

The World’s videography, in other words, offers authentic, tangible connections within an encroaching dominant mode most frequently thought of in terms of instantaneous reproduction, and pervasive, maybe illusory interconnectedness. This is the film’s overt subject as well. The film is most obviously read as commentary on the Chinese boom in the century of globalization, as the employees of Beijing’s World Park—“see the world without ever leaving Beijing”—live through scenarios making them acutely aware of the disconnect between their own lives and the image of the emerging world power they serve.

Though she’s never been on an airplane, Tao (Zhao Tao) dresses up like a stewardess and works in the shadows of miniature versions of the wonders of the modern world. Women settle for controlling boyfriends, and country bumpkins for poorly regulated construction work, amid a sham global buffet—the irony is underlined with wistful pans up a faux Eiffel Tower, or droll cutaways to tourists pretending to hold up a tiny Leaning Tower of Pisa. (Incidentally, the film itself is now something of an urban-replica attraction, too, for its views of a pre-Olympics Beijing skyline.)

But while dramatizing this distance, the elusiveness of the real thing behind the perfect image, the film also suggests a more universal media critique. Dressing up in approximately appropriate ethnic costume in front of the Taj Mahal or a Japanese teahouse, Tao is a projected avatar, albeit one constantly running up against the practical limitations of her simulations—she and an imported Russian coworker share several wrenching scenes together, having no common language except empathy. But Jia does put forward a hopeful vision of human touch in early 21st-century technology: whenever a character receives a text message (generally on a flip phone or a walkie-talkie-sized Motorola), the content of the missive and the hope they’ve invested in it take flight in computer-animated interludes, the flat, unshaded colors and obviously programmed wavings of which seem intimate and touching.

The now outmoded technology The World flaunts brings us back to the vicinity of where we started. Since The World, Jia has completed only one more fiction feature, the Three Gorges region-set Still Life, which like The World sketches a drama around the edges of an industrial-strength metaphor for China’s bulldozing modernization. He’s lately mostly focused on hybridized nonfiction, making no clear distinction between artifice and documentary in his memos to our future selves. In his 24 City, an elegy for an obsolete factory, urban-renewal footage is contextualized by both real remembrances and scripted monologues; in I Wish I Knew, a sort of history of Shanghai, staged sequences and interviews are counterposed with archival clips from classics of Chinese cinema—each component is its own perfect documentary of a past in progress. The supreme irony of film becoming digitized is that every movie is already a piece of data.