A Fabrication
Daniel Witkin on The Color of Pomegranates

The Color of Pomegranates was not Sergei Parajanov’s chosen title for his 1969 magnum opus—that would be Sayat Nova, for the nom de plume of the Caucasian bard who is the film’s subject. However, as far as censor-mandated name changes goes, it’s not a bad one. Pomegranates and their color feature prominently from the film’s very first frames, which show the fruit’s vibrant juice seeping into a white cloth. This color is, of course, also the color of blood, which the following shot, setting a dagger against the reddened cloth, makes abundantly clear. This is not the full extent of its import, though: the fruit also carries connotations of fertility, and even viewers unfamiliar with its many cultural and mythological associations will likely register its suggestive form. And then there is the color itself, a deep crimson that Parajanov gives us an extended moment to soak up. Before we contemplate the more abstract significance of the pomegranate, we must confront its color.

While the pomegranate may get top billing, the role of the cloth in these opening images is no less important. It is the recipient of the richly hued liquid, but much like a canvas or a movie screen, it also shows it off, makes it legible. Textiles, pomegranate-colored or otherwise, constitute an important part of the film’s idiosyncratic style, though one might just as well say that the film’s style is calibrated to show them off. “This film is not the story of a poet’s life. Instead, the filmmaker has attempted to recreate the world of the poet,” hazards the intertitle that opens the film. The phrase, “the world of the poet” introduces an important double meaning. While it no doubt alludes to the poet’s subjectivity (“the modulations of his soul, his passions, his torments”), there is also the matter of the physical world in which he lived, worked, ate, etc. The film will show us the world of the poet; but the poet, too, is of the world. By lavishing so much attention on these cloths, Parajanov shows how this world is not just made but crafted, even woven.

It might go without saying that The Color of Pomegranates, too, is of a specific world. The film’s contemporary notoriety is wrapped up in its counterintuitive emergence from within the Soviet Union after a lengthy ban. Richly colored, sensually textured, and flamboyantly idiosyncratic, it contrasts almost violently with the motifs popularly associated with Eastern bloc Communism: monolithic apartment blocks, paeans to industrialized agriculture, and the like. While this likely has something to do with the Western conflation of the USSR with Russia, the film was indeed more than a little out of step with its time and place. Consisting of highly stylized tableaus, it makes an immediate impression of being somehow both medieval and futuristic, although the era in which it’s set is neither; Sayat Nova, born Harutyun Sayatyan, was an 18th-century ashugh (singer-poet), who lived between Georgia and Armenia, both then part of the Persian Empire. As with Tarkovsky’s Andrei Rublev, the parallels between filmmaker and subject are unignorable. Like Parajanov, Sayat Nova was born to Armenian parents in Tiflis (now Tbilisi, the capital of the Republic of Georgia), and both men suffered under the yokes of foreign empires: Parajanov was jailed multiple times for alleged sexual misdeeds (his bisexuality being something of an open secret), while Sayatyan was beheaded by the Persians for refusing to renounce the Armenian Orthodox Church.

The film’s focus on textiles has a particular resonance within this context. Carpet making has been practiced in Armenia from time immemorial—the fifth-century BCE Pazyryk Carpet, the oldest identified in the world, is said by some to have originated in the region. Armenian rugs were sought after along the Silk Road, and over the Middle Ages spread throughout Europe and Asia. Under Soviet rule, however, the practice was industrialized and traditional patterns were superseded by propagandistic symbology, though it did persist as a private craft. While the history is loaded, it’s the craft itself takes on greater importance in the film. Early in the film, the poet (still a child) visits a workshop where he watches weavers meticulously working their looms as, in a surreal touch, a rug swings metronomically in the background, ticking off the moments. Parajanov then shows the dyeing of the wool into various colors before cutting back to the boy’s thoughtful gaze. Already we observe the centrality of these fabrications in the development of the poet’s sensory vocabulary. In the following images, we see the white feathers of a chicken rubbed with red dye; then a man investigating the same bird, which has been decapitated (an allusion to Sayatyan’s later fate). The connections here are entirely graphic, but they have a certain intuitive logic to them. As Sayat Nova himself pieces these things together, so too are we subtly instructed how to watch the film.

The carpets, which often line the floors and walls of the sets, both framing and filling Parajanov’s consistently delightful tableaus, present a vision of the poet’s world as something thought up by human imagination and crafted by human hands. Alongside the carpets and costumes, many of the most striking visual elements in the film are the settings themselves, including churches and buildings that in some cases have been standing for over a millennium. These structures are a major reason for the film’s anachronistic aura (and the misconception of it as being somehow medieval): significantly more time passed between their construction and the life of Sayat Nova than between his time and the 21st century. If the film seems to give these buildings and objects as least as much attention as its human performers, this is perhaps a reason why. People might come and go, but their handiworks live on. Given the film’s level of abstraction, Parajanov’s Sayat Nova bears only an amorphous relation to his historical counterpart, but the walls of the Haghpat Monastery (founded in 976) are the same ones in which the ashugh lived for much of his life.

The stone edifices and pliant carpets make for a contrast between hard and soft that Parajanov builds on throughout the film. While Parajanov’s compositions often have a painterly flatness—the influence of Persian miniatures is readily apparent—his images also have a remarkable tactility. This is often achieved through the layering of soft objects and their hard environs, alongside bodies—both human and animal—that combine elements of both. The carpet is introduced through a shot of what appears to be bare feet being washed on a patterned rug, which rests on an oddly shaped surface. The next shot reveals the relationship to be inverted: the women are actually washing the rugs, which cling to primeval-looking mounds, revealed to be the domed roofs of a bathhouse. The young poet will return to this location in a later sequence representing his erotic awakening, in which he will ogle both men and women and which culminates in a shot of breasts, one of which is covered by an iridescent seashell, Parajanov’s most brazenly sensual juxtaposition of soft and hard.

Despite the carpets’ association with Armenian identity, they’re consistently connected to experiences that are universal. A coffin is wrapped in a multicolored blanket, which is later seen holding an infant. This raises the question of to whom the film really “belongs.” Parajanov’s work traffics in a sort of folk nationalism, from the Ukrainian Shadows of Forgotten Ancestors (1965) to The Color of Pomegranates, The Legend of Suram Fortress (1985), and Ashik Kerib (1988), which are rooted in Armenian, Georgian, and Azerbaijani cultures, respectively. Though despite this tendency—which, more than any sexual business, is likely what rubbed the Soviet authorities the wrong way (the state was particularly sensitive to anything suggestive of national independence movements, which would, after all, be the catalyst of its ultimate collapse)—Parajanov’s work is hardly nationalistic, particularly when viewed in the aggregate. Nationalisms, like religions, thrive on a certain monogamy: start combining them and the effect is ruined. Claimed as an Armenian folk hero, Sayat Nova wrote and performed in Armenian, Georgian, and Azeri-Persian, an example that Parajanov himself would go on to follow over the course of his career. This, in turn, strikes a poignant contrast not so much with Soviet times but with our own, in which the nationalistic conflict between Armenia and Azerbaijan has wreaked havoc on both countries. But the present context merely adds another layer to Parajanov’s historical tableau. Conflicts and nations ebb and flow, while cloth and stone—like sound and image—endure. 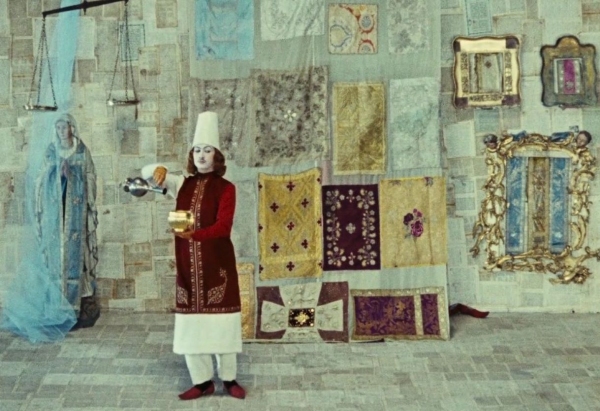