In Front of Your Face/Introduction Worlds Apart Together
By Ryan Swen

Any director as relentlessly prolific, as consciously playful, and rooted in self-made conventions as Hong Sang-soo practically demands that the viewer see each of his films in light of its predecessors. Now 26 films into a 25-year career, Hong has only become more productive: 2019 was the first year since 2007 in which he didn’t premiere a film, and he has rebounded with three films in the past two years. In this span, he has regularly made multiple films in a single year—beginning in 2010 with Oki’s Movie and Hahaha—and three of these five instances have resulted in multiple New York Film Festival Main Slate appearances in the same year, something almost unheard of this century.

As such, the impulse to compare Hong’s films to one another is only heightened when it comes to discussing two works created in such proximity to each other—or three, as in the case of 2017, when Hong premiered On the Beach at Night Alone, Claire’s Camera, and The Day After. Sometimes, these connections result in marked moments of similarity: the projection of mental images by men onto a central woman in 2013’s Nobody’s Daughter Haewon and Our Sunhi, or the previously unprecedented (for Hong) focus on death in luminous black-and-white in 2018’s Grass and Hotel by the River.

But Hong, whose ability to spin endless, often radically different variations on similar themes—in his own words, “infinite worlds possible”—has been commonly misinterpreted as base repetition, the films often evince considerable differences. His output in 2010 and 2013 both featured extensions of his ongoing cycle of Jung Yu-mi films with Oki and Sunhi, while their companion films offered a unique, hilarious, and interweaved set of vacation coincidences with Hahaha, and a more mysterious consideration of family and inner desire in Haewon. The 2017 trifecta found Hong pushing his tonal variety to the limit with the overtly personal On the Beach, the elliptical and cutting black-and-white drama of The Day After (both selected for NYFF), and the delightful, temporally off-kilter Cannes vacation in Claire’s Camera. While the aesthetic style of his 2018 NYFF-selected duo appeared to be unified, the films were quite different in narrative and disposition: Grass imagines a series of conversations between different people as the possible creation of a solitary writer who joins her characters at the close, while Hotel by the River stands among his most emotionally direct and contemplative works, taking concerns about aging and family to a terminal point.

Hong continues this trend with his 2021 films: Introduction, which premiered in competition at Berlin, and In Front of Your Face, which showed in Cannes. On their surfaces, the films appear to be more dissimilar from one another than any of Hong’s same-year films to date. Introduction is in black-and-white and covers an indeterminate but extended period in just 66 minutes, while the latter uses 85 minutes to cover the events of 24 hours in bright colors. But in a break with last year’s The Woman Who Ran, which considered encroaching middle age and a certain ambivalence about domesticity through elliptical means, these two films opt for a more direct approach—in emotional, if not in narrative terms—to morality, mortality, and intergenerational relations.

Introduction takes this last theme as its central conflict, featuring Hong’s first true young adult protagonists for the first time in many years. Young-ho (Shin Seok-ho, a cheery face amidst the dour visages of Hong’s typical male leads) serves as the primary guide, along with his girlfriend Ju-won (Park Mi-so, the only main actor here who hasn’t been in a Hong film before), who both navigate what, in other hands, could be a conventional premise: two young people trying to find their places in the world while dealing with relationship issues, all the while being prompted and challenged by their parents, idols, and other elders.

The progression is considerably complicated here: unfolding in three parts, the last of which takes up half the film, Introduction centers on interactions that lack overt narrative meaning but which firmly establish a certain tone of malaise and uncertainty. Much of this has to do with the downplayed nature of the introductions or conversations that initially seemed so important to the characters. In the first part, Young-ho is left waiting to meet his father (Kim Young-ho), who is occupied with an old friend, a respected actor (Ki Joo-bong) who dropped in unexpectedly. Some months later, Ju-won, who is moving to Hamburg for fashion school in the second part, cuts off her initial meeting with a past acquaintance (Kim Min-hee) of her mother (Hong regular Seo Young-hwa) to reunite with Young-ho, who has impulsively made a quick trip and issues a promise to move to be with his love.

The third part takes place months, possibly years later. In that timespan Young-ho has tried and failed to become an actor—inspired by an unseen encounter with the actor from the first part—and broken up with his girlfriend. Meeting for lunch with his mother (Cho Yun-hee) and the actor, and with a friend (Ha Seong-guk) in tow, he is drunkenly berated by the actor for his unwillingness to hug a woman who wasn’t his girlfriend, before dreaming of a reunion with Ju-won and taking an irrational but enlivening swim on the cold beach.

In Front of Your Face takes place on the relative opposite end of the age spectrum, as it follows Sang-ok (Lee Hye-young, in her first Hong performance), a former actor and a Korean expatriate living in the United States, on her first visit back to Seoul in many years. For the first half of the film, she interacts with her sister, Jeong-ok (Cho), with whom she is staying, and various other people as she waits for a late lunch appointment, including her nephew (Shin) and a family now living in her childhood home. Her meeting with Jae-won (Hong regular Kwon Hae-hyo), a slightly younger director who is attempting to encourage her to act in a film he is writing for her, occupies almost the entire second half of the film, a lunch that turns into a Chinese baijiu-induced unfurling of personal secrets and frustrations; Hong, in typical fashion, first offers a practically idyllic ending to this sequence and then undercuts it with the realities that each character faces.

Both films are notable for how widely they diverge from Hong’s conventions, while still hewing close to his typical insights and standards of excellence. For one, he isleast focused upon his repertory actors in some time, especially his muse and partner Kim Min-hee, who has appeared as the lead in his past six films. Here, she appears in Introduction in only the second section, and has no onscreen role at all in In Front of Your Face, though she is credited as the production manager. Similarly, the most familiar Hong faces, like Kwon and Ki, only appear in sections, leaving the fresh leads to navigate a world that the veterans have already taken part in. Seo’s roles in the two films are especially notable: as Ju-won’s mother in Introduction, she shares some scenes with Kim, her frequent scene partner in Hong’s recent films; when they are alone together, their scenes take on a less bitter and elusive mood than the rest of the film. In Face, she appears briefly as a passerby who takes a photo of the sisters and recognizes Sang-ok as a former actress; her walking companion in the scene is Lee Eun-mi, who played her romantic partner in The Woman Who Ran, one of the most overt examples of the same Hong character seeming to appear in multiple films and a startlingly familiar element in films that otherwise move in new directions for Hong.

In addition, perhaps out of pandemic-related necessity, Hong is taking on more hats here: along with his usual writing and directing roles, he is credited as cinematographer, music composer, and editor of these two films. Correspondingly, the music, always an unconventional but important mood-setter for Hong’s films, is even more stripped down than before, practically reduced to a few guitar strums.

Despite the greater amount of incident in Introduction and In Front of Your Face than in, say, the nearly context-free interactions of Grass and The Woman Who Ran, the sense of characterization emerges equally from the supposed downtime, the moments between the conversations. This is clearer in In Front of Your Face, which has more time to explore than the purposefully curtailed, almost lacunary Introduction. In In Front of Your Face, Hong brings back a technique that he hasn’t used since the first half of Right Now, Wrong Then (2015): voiceover to illustrate a character’s thoughts. Here, they are deployed as a form of prayer, and this tightly links the two films: Introduction opens with the father’s desperate prayer for a second chance, though his reasons aren’t made explicit. Sang-ok’s own requests are much more sanguine and contemplative, asking for little things like being able to remain vigilant at her lunch meeting with Jae-won and in general to maintain a certain measure of paradise.

The reason for this aging woman’s state of grace is eventually explained, along with the meaning behind the title In Front of Your Face—itself an unusually direct move for Hong, whose titles usually occupy a more poetic and ambiguous dimension. No such reprieve exists for the young people in Introduction, at least not in explicit narrative terms—in the end they remain as unmoored and uncertain as ever. After Young-ho takes his uncomfortable but refreshing swim, Hong pans from his still figure to the shifting waves of the beach (effectively mirroring the site of many Hong endings, including The Woman Who Ran), and then, after holding a few moments, pans back to the two friends taking care of each other, a gesture of unity that, after the previous scenes’ rancor, acts as its own measure of tranquility.

Such a union ultimately collapses between Sang-ok and Jae-won, but in the last scene Hong circles back to the preexisting relationship between the sisters, conveying with one line of dialogue and a few gestures a connection that has come out of a difficult situation stronger than ever. If these two Hong films ultimately resolve themselves more forthrightly optimistic and clear than his others have in a while, it is a testament to his continued inspiration that they take such compellingly divergent pathways to get there. 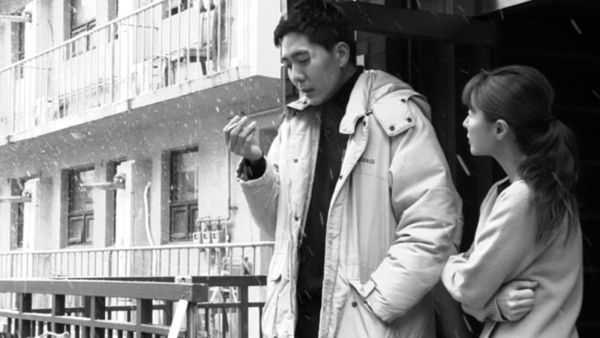