Closing In
Chris Wisniewski on Beyond the Hills

Film criticism, if it’s done right—or at least, interestingly—isn’t necessarily about the assignation of value, which ultimately boils down to a question of taste. Instead, the best criticism deals first and principally with what is there on the screen: the shape and composition of the image, the rhythms of the editing, the sound design, and so on, and what the choices behind these cinematic qualities might communicate. It’s work that is, in ways, ill suited to written language. Instead, this kind of descriptive observation usually gets replaced by adjectives that more or less approximate whatever aesthetic effect the filmmaker achieves. And so, when talking or writing about movies, we end up describing the effect of the thing rather than the thing itself. A movie might be “detached” (e.g., Michael Haneke) or “humane” (the Dardennes), “expansive” (Malick) or “studied” (Fincher), “kinetic” (Greengrass) or “austere” (Tsai). These adjectives may be apt, but they also function as shorthand, eliding the filmic while serving as a connecting thread between the aesthetic impression a movie makes and its larger artistic ambitions. (By calling Terrence Malick’s recent films “expansive,” one is really suggesting that through mise-en-scène, camera movement, and editing, they eschew easy signifiers for psychological interiority, placing characters in—literally—wider contexts that are both historically and culturally determined and philosophically inflected.)

The films by the Romanian director Cristian Mungiu, including the Palme d’or–winning 4 Months, 3 Weeks, and 2 Days, which put Mungiu on the international art-cinema map, and its less heralded but equally superb follow-up Beyond the Hills, often get described as being “claustrophobic.” Both 4 Months and Beyond the Hills are dour, punishing films about powerless women confronting rigid social structures. In the former, a young woman in Ceausescu-era Romania attempts to secure an illegal abortion for her friend; in the latter, a migrant worker returns from Germany to Romania to retrieve her friend, who has joined a conservative Christian religious sect. Both films consist largely of excruciating long takes that are often master shots, with sparing close ups or cutaways. Mungiu’s filmmaking is rigorous, and his stories are bleak. Anyone who has sat through either would undoubtedly walk away with a sense of claustrophobia, with an impression of an art cinema that is relentlessly focused on the subjective experience of marginalization to the point of oppression for viewer and character alike, a cinematic approach that feels achingly, painfully closed in.

How strange is it, then, that both 4 Months, 3 Weeks, and 2 Days and Beyond the Hills are shot in a widescreen aspect ratio—the 2.35:1 often associated with the grand, expansive CinemaScope Hollywood epics of the 1950s? The anamorphic widescreen CinemaScope ratio was invented as a part of an industry-wide response to the rise of television, a way of asserting the superiority of the filmic image to the televisual one, on the literal logic that bigger (i.e., wider) is better. This is the aspect ratio of The Robe and How to Marry a Millionaire. So how do we square this with the cinema of Cristian Mungiu? How can Mungiu’s wide-widescreen images be claustrophobic, and how is it that films that are shot in a defiantly expansive aspect ratio achieve an effect of isolation and narrowness, a closing in? To answer those questions, perhaps it’s best to look at one of the movies—to start with the thing itself, rather than the effect of the thing, to see how it achieves what it sets out to do.

Inspired by real events, Beyond the Hills is the story of an exorcism gone awry, a depiction of religious devotion and fanaticism that takes a turn for the sinister, a portrait of economic and social deprivation, and a study of loneliness and heartbreak. Alina (Cristina Flatur) comes back to her Romanian home from Germany to reunite with Voichita (Cosmina Stratan). She and Voichita were friends (and, it is clearly underlined, lovers) while growing up together in an orphanage. After drifting through foster homes, Alina emigrated in search of economic opportunity; Voichita, meanwhile, found a sense of belonging and meaning at a convent outside of town that has a premodern quality and is overseen by a strict patriarch (Valeriu Andriuta) who rails against the moral degradation of contemporary life, including sexual promiscuity and homosexuality. Alina believes Voichita will return to Germany with her. Voichita, meanwhile, tries to incorporate her friend into the life of the convent, but when Alina fails to conform, she is rejected and punished as, first, a disruptive and, eventually, a demonic presence.

Plot synopsis, though, has a way of communicating everything and nothing about a movie at the same time. As the description above implies, Beyond the Hills unfolds as a tragedy, a slow and horrible march toward alienation, then violence, and, finally, death. Its setting, key to understanding the psychology of its characters, is isolated and rural, free of the trappings and technologies of contemporary Romanian life. Its drama is relational, about how Alina and Voichita interact with one another and how they integrate—or fail to—with the social, religious, and even physical environment of the convent. Thus, from plot alone, it is clear why Mungiu’s film might engage in a negotiation between visual breadth and intimacy and confinement, why it might strain toward context and width while also narrowing, closing in, and suggesting claustrophobia. This does not explain how Mungiu satisfies these contradictory impulses—in other words, how his movie functions as a movie.

As an undergraduate, I took a course with a well-regarded film scholar who used to demand that we pay special attention to the opening and closing sequences of any movie we were trying to analyze. These “privileged moments,” he argued, must of necessity reveal something about the intentions of the director. While they shouldn’t be treated as the key to decoding the film as a whole, they must reveal something about how the movie works cinematically—they are too prominent to not have some meaning. From this perspective, to grapple with Mungiu’s film and his use of the 2.35:1 frame he employs, I want to look more closely at the “privileged moments” that begin and end it.

Beyond the Hills opens with a handheld following shot of Voichita. The back of her head occupies the center of the frame as she walks away from the camera. She is surrounded by people moving in the other direction, toward the camera, and on each side of the frame, a train. These first images directly subvert the widescreen aspect ratio because the trains and the crowds box her in. When she gets past the trains and the sea of people, just as the image opens up, she turns and addresses Alina, who is out of frame. The camera moves to capture both friends, the width of the image now asserting itself. Then, as Alina embraces Voichita, a train pulls behind them, eliminating the station and most of the people around them from the mise-en-scène. The two women alone dominate the frame as Voichita implores her friend to let her go, telling her “People are looking,” though no one else is visible when she says this. The first shot thus alternates from deemphasizing the width of the frame while instead highlighting the depth of the space, to opening itself up to a more expansive widescreen mise-en-scène, and then finally settling on an image that is flat, wide, and empty. In one shot, in under two minutes, Mungiu visually segregates Voichita, depicting her as quite literally out of step with contemporary life, thrusts the relationship between her and Alina to the movie’s visual and narrative center, and introduces a tension between how their relationship is perceived by others and the comfort they give one another as lost souls and social outcasts.

After a two shot of the women sitting silently with one another on a bus, Mungiu next finds them on their walk towards the convent. It is here, in the film’s third shot, that he first makes pointed use of his 2.35 frame. They walk up a hill in extreme long shot as the town from which they came is visible in the far distance. They move away from the town, looking back at it, and start towards the camera, which turns and climbs up the hill with them, as the convent slowly becomes visible in the distance. With his scope frame, Mungiu captures his two protagonists in an interstitial place, highlighting their remove from the world below and their retreat to an apparent sanctuary that is shut off from the outside. The entirety of the film plays out as a conflict between the two social worlds of contemporary Romanian life and retrograde religious fanaticism. To the extent that both are defined by exclusionary systems of power (economic, patriarchal, religious, and moral), the inability of these women to successfully operate in either space—their fundamental “in betweenness,” invoked in this shot—becomes their undoing. Each world is both too large and too small for them, and to communicate this essential observation, Mungiu takes full advantage of his frame, sometimes by maximizing its visual potential and sometimes by denying it.

In the film’s final scene, Mungiu revisits the visual logic of this introductory sequence and especially the opening moments of his first shot. In a barbaric assertion of their religious sect’s premodern moral authority, Voichita’s compatriots attempt to exorcise Alina and murder her in the process. Too late, they seek medical attention for her at a hospital and are, in turn, handed over to the police for questioning. The officers load a van with the convent’s priest and several of its nuns, including Voichita, who now wears civilian garb. As the last shot begins, the van is in motion. The camera sits in back facing the windshield, the street and its hustle-and-bustle visible through the window. Voichita sits, immobile and barely visible frame left, with the priest positioned as her mirror image frame right. Both contemplate their culpability for the disastrous consequences of the ill-conceived exorcism. The police, meanwhile, talk about a thoroughly postmodern murder—a boy has killed his mother and posted images of his crime to the Internet. When the movie began, Voichita occupied the center of the frame, a static image of a body in motion as her contemporaries moved past on either side of her. Here, the positions are reversed, Voichita now pushed to the side of the image, the modern world occupying its center. As in the first shot, Mungiu’s camera is in motion and captures motion, while also suggesting stasis, fixing or even trapping Voichita in the commotion.

Then the camera leaves her behind. It moves forward just a little, as the van sits near a corner. A car passes and splashes dirt on the windshield. The wipers clean the window to reveal the busy modern world, indifferent to the lost souls who have just been edged out of the cinematic space.

For Mungiu, there are political and dramatic implications to the way that people and bodies occupy and interact within a frame, the way that the camera moves to depict action and reveal setting, and the way onscreen and off-screen space are established. This is no less true in 4 Months, 3 Weeks, and 2 Days than in Beyond the Hills, and it depends fully on the use of the widescreen image. Mungiu’s 2.35:1 aspect ratio does not serve the aims of epic grandeur but instead instantiates an existential claustrophobia that is terrifying and, finally, desperately sad. 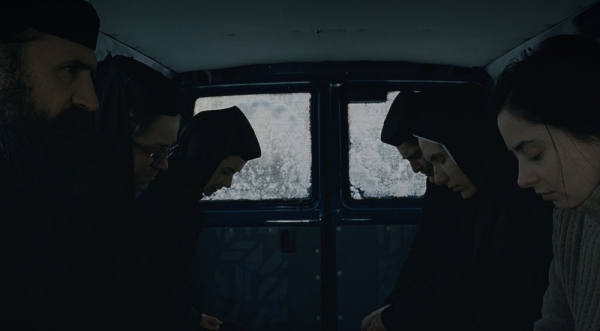