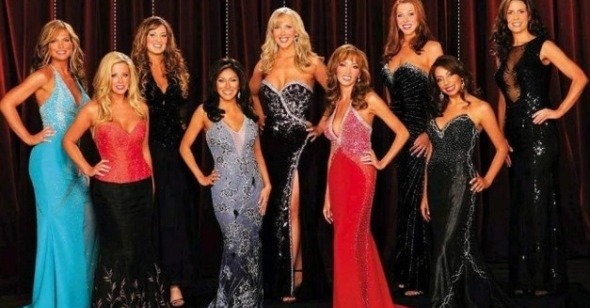 Raw Sewage
Tyson Kubota on The Swan and Saw

We live in an age of great television.There are many shows worth binging on—like The Sopranos and Breaking Bad and Game of Thrones—but when the cream rises to the top, there are always dregs. Let’s not forget the garbage that has settled to the bottom of our new “golden age,” on screens of every size. Dumpster diving for relics of the mid-aughts, I came up with The Swan and Saw, a matched pair of misbegotten 2004 meditations on scopophilia and spectatorship. Both could charitably be described as “guilty pleasures”: highly popular works criticized for their debased attitudes, shot through with insidious ideology, and yet crafted with strange care.

Descended from the late-nineties lo-fi benchmarks Pi and The Blair Witch Project, Saw was the grimy, low-budget, Sundance-feted start of a seven-film franchise that would ultimately earn nearly $1 billion at the box office and encompass games, comic books, and even a roller coaster. The Swan aired for two controversial seasons on Fox, carrying the torch of Extreme Makeover and Nip/Tuck into new depths of bad taste and existential despair. Both film and television series arrived in a troubled, if fecund, cultural moment, when the spectral threat of ubiquitous, indeterminate evil unleashed by 9/11 was causing American film and television makers to grapple with our beleaguered national myths.

The Swan’s title evokes a fabled metamorphosis: each episode follows two women as they receive extensive plastic surgery, recover alone and in pain, and then emerge onto a studio set, where a “winner” is chosen. Yet, instead of casting the growth of its heroines as inevitable, part of the natural order, the series stakes their transformation on a mix of technology and personal motivation. The show’s devious format mingles self-help rhetoric with a faith in expert knowledge, all cast in a competitive atmosphere. The winners will eventually compete in a climactic beauty pageant, where one is crowned the season’s champion, "the Swan."

Competing on The Swan is at once playing the odds and leaving nothing to chance. The contestants all get surgery from the same trio of doctors, and generally the same set of procedures: tummy tuck, boob job, “cankle” reduction, brow lift, chin lift, tooth veneers. Then each recovers in the same hospital, and parades through the same set, standing before the same mirror for their big reveals. The final winner is supposedly chosen based on the outcome of her plastic surgeries, as judged by the same “experts” who performed them, and her commitment to lifestyle changes that will enable her to “make the most” of her new appearance. An unspoken irony of the show is that these women could be psychologically scarred by such radical trauma, or that their fragile emotional states make them poor candidates for any surgery at all. Beth Lay, the winner of the fourth episode in the first season, exemplifies many contestants’ mindset. At age 25, she considers plastic surgery a last-ditch attempt to win back her cheating husband; she hasn’t divorced him because she’s “afraid nobody else will ever love” her. In Beth’s post-surgery “struggle” montage, she works out in facial bandages, phones her estranged husband in tears, and meets with a therapist.

Like all “reality” TV, The Swan operates via layers of deflection and distraction, so that what we ultimately see onscreen is a story shaped by a range of impulses and desires, a funhouse-mirror reflection of someone’s life. In this case, the show’s market appeal depends on creating distance from its raw, queasy core. We watch it through a set of framing devices that hold the awfulness at bay. Aesthetically, the show freely mixes soap operatic lighting and heavily artificial studio sets with the technologist bent of crime/medical TV, often cutting to pop-scientific surgical diagrams, 3D computer graphics, and time-lapse photography.

The Swan plays tricks, putting the viewer in an impossible vantage point for each climactic “reveal” scene. The Swan-to-be, Beth, makes her stage entrance, walking an aisle lined with (paid) observers: the surgical team, the life coach, the fitness trainer, and the show's creator, Nely Galan. Beth approaches a brocade curtain. The host asks, “Are you ready to see yourself?” The Swan says yes. There are close-ups of clenched fists, deep breathing, and expectant stares, set to cello stabs. As the curtain swings open to reveal a large mirror, the show cuts to the key shot: there’s a camera mounted behind the one-way mirror, shooting through the glass, so we see Beth in the foreground with the onlookers visible behind.

Beth falls to her knees, hands clasped to her mouth. “Oh my gosh,” she shrieks through tears. We watch her react in real time to her new appearance, but at a technological remove: we get the feeling of direct address without the pressure of needing to reply. One reaction might be horror, since the women now look like plastic dolls, but the host quickly intercedes: “You have yourself to thank, Beth, and all of the experts. Guys, well done!” The advisers behind Beth grin and applaud, signaling how we’re meant to react.

The Swan houses its contestants in homes with covered-over mirrors; the reveal scene is allegedly the first time they see themselves post-surgery. Thus, since we follow her through a months-long convalescence, compressed into a span of minutes, we are given a privileged perspective, having been the “first” to see Beth’s new face. At the same time, there is no explicit attempt to implicate the viewer in the spectacle. The show doesn’t question the dangers of plastic surgery, and only minor attention is given to the mental repercussions. The Swan also elides class differences, yet it’s implicit that these women could never afford such surgeries on their own, which casts a sickly aspirational gleam over the whole affair.

The show suggests that all the women are de facto winners (because they get pricey plastic surgery for free), but whoever tries hardest becomes the real champion. In this farce of control, participants consent to radical alterations under the pretense that doing so will allow them to reveal their “true” selves. Again and again, the show’s host asks the women post-surgery whether “the outside finally matches the inside.” In this sense, The Swan is wholly American. The notion of a universal metric of success that can be achieved through hard work and a “helping hand” is an old thread in our national history, from the Puritan work ethic to Horatio Alger. This attitude is a familiar mix of personal spark, ingenuity, and technological prowess, but it collapses when practiced in a moral void. Because the standard to which these women aspire is itself a contradiction—“let us give you a new, fake body and face to become who you really are”—the process is doomed to fail.

Saw’s narrative also hinges on the power to mutilate and scrutinize human bodies from a distance. It quickly establishes a dynamic between revulsion and voyeurism; the film opens with two men, a surgeon and a freelance photographer, chained to a bathroom wall, each granted a hacksaw. A corpse rots between them, dark blood congealing on the filthy tiles. This is the first in a succession of repellent images, like the severed hands, feet, and other appendages that have adorned the past decade of the franchise’s movie posters.

The dual nature of the exploitation film, which promises lurid thrills but delays their delivery for maximum gratification, is in full effect in Saw. The film leads the viewer through an elaborate range of torture devices and gruesome scenarios: a viselike “reverse bear trap” mask that rips its wearer's jaws apart, a cage cobwebbed with barbed wire, a chair augmented with head-aimed power drills, and yet, the premise beneath all these contortions is that the villain, Jigsaw, is really trying to teach people to value their lives. It's the same trite lesson belabored a few years earlier in Fight Club, when Tyler Durden held up a dorky Asian guy at gunpoint, then let him go to eat a breakfast that “will taste better than any meal you or I have ever tasted.” That hubris is not so different from The Swan’s insistence that those in positions of power can make optimal life decisions for insecure women. And like The Swan, Saw attempts to teach us about ourselves (beyond that we’re all closet sadists). It’s mostly sanctimonious posturing, but Saw is loaded with clumsy indictments of our desire to watch, matched with onscreen content that dares you to look away.

Saw also feigns social-mindedness, devoting narrative threads to vague evocations of class conflict and a crisis of masculinity. Cary Elwes, the imprisoned surgeon falsely accused of being the Jigsaw Killer, is the picture of the impotent hegemon. Dissatisfied in marriage and in life, he bails on an affair with a nubile resident, then wakes up confined to a filthy subterranean bathroom, a grungy twentysomething (Leigh Whannell) chained in the opposite corner. Elwes spends the film’s first half murmuring to his fellow prisoner, scheming ways to escape and ruminating on his plight. When he does speak, it’s to rail against perceived injustice: “You took money to invade my privacy,” he shouts at Leigh Whannell's photographer, who caught him in his aborted affair. “My camera doesn't know how to lie. It only shows what’s right in front of you,” Whannell retorts. When Elwes realizes his family’s lives hang in the balance, he spends a lot of time crying on the floor, distraught at his inability to save them.

Saw and The Swan are only a decade old, but both now seem like relics from a time when it was a novelty to fixate on the body and its destruction; they represent blunt, perhaps unintentional, stabs at integrating ultraviolent, mutilation-based horror into a mass-audience aesthetic. Both franchises were canny enough to wedge themselves into a widening gap in our society: between the surface belief in exceptionalism and self-improvement, and the reality of stasis and decline. Early-2000s anxieties about America’s waning position in the world—9/11, the endless wars in Iraq and Afghanistan, school shootings—surfaced as forceful, if often misguided, screen visualizations. Both franchises began in 2004, the year Mel Gibson's scabrous The Passion of the Christ topped the box office. Violence in video games and movies was the most popular target of media derision, but ten years later, what once was decried as “torture porn” has become commonplace in the mainstream: compare Cary Elwes’s climactic footwork, amped up with pounding music and anguished screams, to Game of Thrones’ imprisoned Jaime Lannister, severed hand tied to a hemp rope, casually dangling from his neck.

A decade ago, Saw was controversial for its explicit violence. Now, similar depictions in some of our most acclaimed television shows rarely cause finger-wagging. This subtle cultural shift in what it means to watch, a broad denial of complicity in an obscene world, shows how the attitudes of The Swan and Saw have only burrowed deeper, tick-like. Paralleling terrorism’s psychic toll, works such as these have largely succeeded in coarsening how we see the body onscreen. Their mix of abjection and ambivalent nihilism has become a familiar televisual posture, and a reliable performer at the box office—not only in the Saw franchise itself, but its spiritual offspring like Hostel and The Human Centipede. The Swan, too, lives on via the various Real Housewives, or in the Kardashians getting Botoxed in front of TV cameras, or even the Teen Mom-turned-porn-star Farrah Abraham. Saw and The Swan seem to encompass the dark, cynical heart of mass culture. They ultimately plot two extremes of a terrifyingly bleak thesis: although we may strive to perfect ourselves inside and out, in the end all we are is meat. 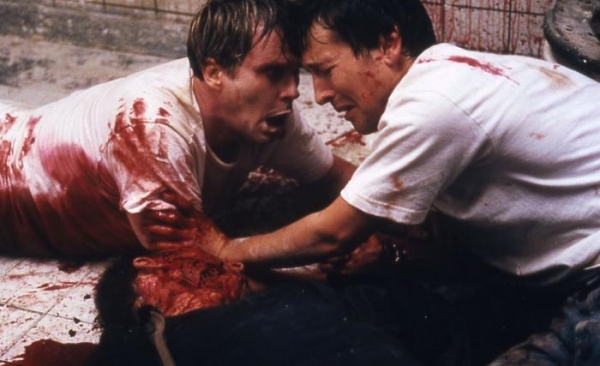