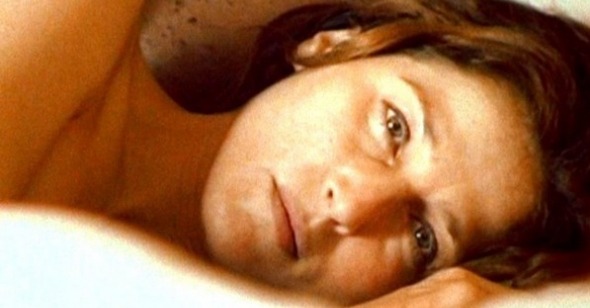 Where the Truth Lies
Benjamin Mercer on Steven Soderbergh’s sex, lies, and videotape and Full Frontal

Steven Soderbergh’s 1989 debut, sex, lies and videotape, revolves around a frat boy-cum-artiste named Graham, played by James Spader, who claims complete impotence but quite openly discusses his makeshift solution to his intimacy problem: he videotapes his very candid interviews with women about their sex lives and later, when he’s alone, replays these tapes to get off. To calm any concerns his female subjects might have about his intentions and to ensure their willingness to tell absolutely everything to the camera, he takes the total privacy of home viewing as a solemn oath.

Almost twenty years later, Michel Gondry’s Be Kind Rewind offers an antithetical view of VHS as a kooky atavism brimming with the blustering spirit of commerce. In Gondry’s film, two friends, inventive dolts played by Jack Black and Mos Def, produce “remakes” of big Hollywood hits from memory and then rent them back out to a wildly receptive public. The unlikely impresarios not only stumble upon a viable business venture, they also wind up building a community—Passaic, New Jersey, effectively metamorphoses into an art colony.

Of course, in the nineteen years between sex, lies and Be Kind—nineteen years that somewhat eerily coincide with the entirety of my formal education, from my entry into preschool to my graduation from college—video has gone digital, becoming cheaper and easier to shoot and edit, with the resolution of its image improving quite rapidly as well. Digital features are, for the moment, more often than not transferred back onto film for projection and shown regularly to large audiences in public venues; features shot on film regularly pass through one intermediate digital process or another before making their way to theaters. Meanwhile, websites offering both film and video content often also play host to long chains of user comments that further intervene between the home viewer and the home viewing, appending an essentially public forum to the private screen.

Despite all these developments, in the two features he’s shot thus far on digital video, 2002’s Full Frontal and 2006’s Bubble (with two more to come later this year, Guerrilla and The Argentine, both starring Benicio Del Toro as Che Guevara), Soderbergh still uses video as a medium of unbridled confession, a unique outlet for furtive unburdening. Full Frontal was even heralded as a kind of spiritual sequel to sex, lies, and videotape, and while it didn’t come close to duplicating that film’s immense financial (or critical) success, the claim is certainly more than a disingenuous sales pitch. Soderbergh still delights in playing the voyeur, and a look at his body of work suggests it’s video that allows him to do so most freely.

In Full Frontal, the majority of which was shot on degraded mini-DV, and Bubble, shot on hi-def, it’s as if Soderbergh is unearthing something hidden or buried beneath his more traditional, though not necessarily more linear, works for hire, exposing a world heretofore unseen, at least in popular films. Not that these are untold stories told in particularly novel ways. Full Frontal is a more or less typical Hollywood navel-gazing ensemble piece in which nothing really happens but a lot of industry players seem to get needled; Bubble is a deliberately formulaic tale of jealousy and murder whose dead-ended characters, all played by non-actors, tramp slackly from one set piece to another.

But these films, both cowritten by Coleman Hough, deal with a much more profound sense of isolation and stasis than the handful of Soderbergh’s bigger budgeted films that also find their main characters stuck in holding patterns brought about by their desires (2006’s The Good German and 2002’s Solaris, which arrived in theaters a mere three and a half months after Full Frontal). Bubble and Full Frontal are populated by characters mostly memorable for their “low-level, free-floating anxiety,” words used in the latter film by the magazine writer Carl (David Hyde Pierce) in reference to his thinning hair. Nearly all of the characters in Full Frontal struggle to express similarly vague, nagging feelings of discontent, fueled by their various individual neuroses—they are not so much involved in ushering a plot forward as caught, nearly crushed, in its gears.

What’s different in Soderbergh’s digital work, and especially in Full Frontal, what gives it that distinctive quality of exposure, is that his characters’ self-examination is directed only toward deeper self-examination, and not necessarily toward a particular narrative end. Throughout Full Frontal, these quietly desperate individuals express their unsettled feelings in nakedly honest voiceovers, presumably snippets from probing interviews à la sex, lies. Unlike in Graham’s statically composed home videos, however, the interviewer remains unseen and unheard. In Full Frontal, the contract between interviewer and interviewee is maddeningly, deliberately unclear.

Soderbergh uses the video camera primarily as an investigative tool, but it seems that the reliability of the evidence it collects is eroding, not improving, as technologies advance. Full Frontal captures a distinctly pre–Be Kind, post–sex, lies moment for the medium of video; Soderbergh documents the intensely private while also subtly subjecting it to the concealments and elisions of film editing. Whereas the purpose of Graham’s videocassettes in sex, lies is so raw, perversely simple, and clearly laid out by him to his subjects, Full Frontal is elusive, often looking more like the rupture of some curiously soap-operatic closed circuit than the result of anyone’s intentions.

And surveillance is indeed a pillar of Soderbergh’s digital aesthetic: the more portable, less obviously intrusive apparatus of video implicitly promises to look for truths in the interstices into which film cannot hope to peer—and the fruits of its prying are all available for immediate playback. In Full Frontal, the video camera seems to linger insistently over the situations it happens upon—a cruel and depressive human resources rep in a power suit playing mind games with the employees she’s just fired, a movie producer pleading for a happy ending from his masseuse—pushing in close on its subjects, and sometimes even orbiting obsessively around them. The camera often approaches scenes slowly, crawling around a threshold at the end of a hallway or creeping in slowly from across a room.

Mysteriously unrelenting and often oppressively self-referential, Full Frontal also quite explicitly addresses the differences between, and increasing resemblances of, film and video. The feature follows a loosely connected cast of characters leading up to the birthday party of a successful film producer named Gus Delario (David Duchovny, in what amounts to a cameo). Most of these characters are involved in the production of Rendezvous, a sleek, chatty (and ultimately dull) romance produced by Gus and written by Carl (Hyde-Pierce) and Ed (Enrico Colantoni). Rendezvous stars Calvin (Blair Underwood) and Francesca (Julia Roberts), two well-known actors, as a movie star and a journalist writing a piece on him, respectively. Soderbergh intersperses sequential scenes from Rendezvous, shot on film, with the lives of those behind the film, shot on deliberately murky DV, presumably to play up the contrast with the glossy artifice of Rendezvous. More measured, classical cutting and more static compositions also contrast with the chaotic handheld camerawork and jump-cutting of the digital sections.

Rendezvous, however, is a lot more than a generalized parody of a Hollywood romance of the chatty and vaguely titillating variety. In its concern with specific issues of celebrity and sexual dynamics, Rendezvous seems to be a stab at self-parody on Soderbegh’s part—it’s not unlike Out of Sight (1998) without the caper plotline. About halfway through Full Frontal, a scene from the film within the film stops suddenly, the camera drifts slowly away from the action, and a cut takes us to the same events rendered in the more grimy digital, burned out around the edges of the frame. Francesca removes her wig, and the director of Rendezvous enters the frame, offering some notes for his two stars. It’s Soderbergh himself, though he has placed a large black censor bar over his face. By concealing himself, he’s perhaps trying to preserve his role as the purely objective referee. Or maybe this is just an empty formalist gesture. Either way, this blatant obfuscation occurs on video, not film.

Upon closer inspection, Soderbergh takes his tendency toward self-parody even further. Not merely a vague self-parody, Rendezvous is also a sort of self-pastiche. The majority of Rendezvous takes place aboard various modes of transport, perhaps a recognition of the necessity for films to hurtle forward, both through the light of the projector and as a narrative vehicle, something Soderbergh acknowledges in the first image of his first film: the asphalt swiftly passing underneath in a blur. More concretely, in a scene from Rendezvous that takes place on a plane, Soderbergh cuts to Terence Stamp barking cockney slang at the woman seated next to him. It’s essentially a scene from 1999’s The Limey played from another angle. Cutting away to Stamp here serves no narrative function in Rendezvous, and only seems to occur to underscore the film within the film as a sort of deliberately banal aggregate of Soderbergh’s own film work.

The aesthetic differences between Rendezvous and the rest of Full Frontal are readily apparent, but the two media are intercut, presented as equivalents as much as they are antitheses. sex, lies, and videotape was intimately concerned with a cache of videos but revealed the contents of those videos very sparingly, and only when one of the characters hit play. In Full Frontal, Soderbergh establishes a deeper continuity between his digital world and his filmic one. The cuts between the digital footage and Rendezvous often occur after doors—to offices, homes, or cars—close, or while characters stand in thresholds or pass through hallways. And that one cut that divides Rendezvous itself from what’s occurring after the film stops rolling feels more like a seam than an edit proper—it’s the one cut between media that does not imply any real spatial or temporal gap.

It’s easy to get lost in the funhouse watching Full Frontal, or, perhaps more appropriately, to feel that Soderbergh himself is lost in it, but by the end of the film he does give us a clearer idea of the continuity between Rendezvous and the supposedly unfiltered life underneath it. The last scene of Full Frontal shows two prospective lovers (Mary McCormack and Enrico Colantoni) boarding a plane for Tucson. But then the camera pulls back to reveal it’s just a small cross-section of a plane, a film set, presumably the same one used at the beginning of Rendezvous—fourth wall broken (or, as Soderbergh proposes in his commentary track on the Schizopolis DVD, perhaps the fifth wall, the sixth, or even the ceiling). Artifice dutifully exposed. Spader’s Graham may have a history of spinning lies, but his videography contains only the most direct truths, truths that would be practically unutterable under almost any other conditions. But thirteen years later Soderbergh finds that video’s mainline access to these truths is in the process of being severed; the medium, like desire itself, merely orbits around a false promise of fulfillment, and just a little more obsessively than film does.