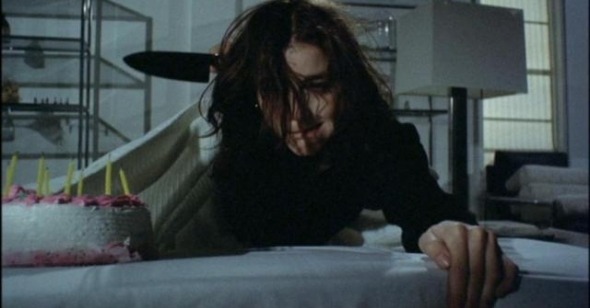 The screen is split in two. On the left side, a man in a trench coat cleans up the scene of a grisly murder; his actions are urgent, but precise. On the right side, a young female reporter who witnessed the murder from her window across the street waits for the police so that she can gain entry to the apartment where the killing occurred. Tension builds as suspense is played out in both frames. Will he be able to hide the evidence in time? Will the cops catch him in the act? Hearts pound. Thrills are promised. And then, right in the middle of this fraught scene…the man in the trench coat slips face first onto the floor in a pratfall straight out of a Buster Keaton movie. Is it worth mentioning that he sports a pencil-thin moustache and speaks with a terrible French accent? Or that the female reporter slips in the very same spot later in the movie, dropping a birthday cake that lands with a splat onto a detective’s shoe?

If it were an isolated moment, this incongruous imitation of Inspector Clouseau slapstick in Brian De Palma’s Sisters (1973) would hardly be worth mentioning. It certainly seems like it should be incidental, a mere bit of fun being had with the split screen. It’s a catch-it-if-you-can bit that requires your eyes to be trained on the left side of the screen and not wrapped up in reporter Jennifer Salt’s waiting game, and, if you did notice it, it could be said to ratchet up the suspense, increasing the chances that the murder will be discovered. It’s not just there for comedy, is it? After all, we’re talking Sisters, a film about psychologically unstable Siamese twins that was billed as a horror movie when it first came out—the posters advertised a “Special Shock Recovery Period” following each screening, along with the tag line: “What the Devil hath joined together, let no man tear asunder!” Even today it’s discussed primarily as a suspense film, De Palma’s initial foray into Hitchcockian homage, and the first example of the style that he would exploit from then on: the split screens, the zooms, the tight thriller pacing. Sisters is all of those things, of course—it has some genuinely terrifying moments, it keeps a tight noose around the audience’s collective psyche, and, yes, if you’re looking for it, it takes several Hitchcock films and puts them in a blender. What’s rarely discussed is the comedy. Sisters is also a laugh-out loud, sometimes bitingly satirical, sometimes physical, often absurdist comedy. Not unintentional, and not camp, but straight-up comedy.

Consider “Peeping Toms.” Sisters opens on a shot of an apparently blind woman unknowingly undressing in front of a leering light-skinned black man. An unsettling Bernard Hermann score plays. Something is going to happen—or so we think. Instead, the camera zooms out to reveal that we are on a set of a cheesy game show called “Peeping Toms,” a voyeuristic Candid Camera rip-off. Played by Margot Kidder, the “blind” woman is Danielle Breton, an actress who was in on the set-up. There is laughter, and we get a shot of the studio audience, which includes the trench-coated Frenchman reading a newspaper and looking like he wandered in from another movie. The audience keeps laughing, at the man’s foolishness, his thwarted sexual desire. But he takes it in stride. Gifts are handed out. Naturally, Danielle receives a set of cutlery, featuring a particularly shiny, sharp Chef’s knife (do you really think it’ll be used for cooking?), while the Peeping Tom, actual name Philip Woode, gets a complimentary dinner for two at the African Room . . . which features a waiter in a derby, a tuxedo shirt, coat, bowtie, and fake grass skirt. Woode chuckles in knowing disbelief. The first ten minutes of the film have passed, all without a trace of a scare.

As the movie continues, right along with the mounting murder and the mayhem we get several cheap jabs at Staten Island, a few pointed race and hippie jokes, the clueless prattling mother, and some whipcrack banter courtesy of Charles Durning as a particularly single-minded private investigator (educated at the “Brooklyn Institute of Modern Investigation” no less), who ends up following a couch to Quebec. Then, there’s the madhouse. I don’t want to spoil it for those who haven’t experienced it; suffice to say, it involves a menacing old man with hedge clippers, a woman with an unhealthy relationship towards telephones and cleaning products, and tap-dancing triplets.

Sisters was a huge evolutionary step for De Palma—here he discovered his own inimitable style. In it you can see horror, suspense, and comedy laid out side by side. Before Sisters he made slyly subversive comedies such as Greetings and Hi, Mom!, and he never really lost his satiric edge (or he simply couldn’t stop his comic urge from pushing its way in). It’s this, perhaps, that's led to De Palma’s status as one of the most misunderstood late 20th-century American directors.

Sure, his movies are full of dazzling cinematographic acrobatics, kinky thrills, and pungent violence—but they’re also full of blatant humor, from the over-the-top insanity of Scarface to the pure excess of Body Double, from the softcore exploitation of Dressed to Kill to the silly twists of Femme Fatale to Sean Penn’s, um, committed performance in Carlito’s Way. Maybe what makes audiences and critics uncomfortable is that they think they’re laughing at these movies rather than with them—that De Palma has somehow slipped up. It’s an easy way to deny De Palma’s genius, his ability for taking seemingly incompatible elements, throwing them up on the screen in bizarre combinations that seem to defy cinematic nature, turning the whole thing up to eleven, and still actually making it work.

The result of this chimera effect is what makes Sisters and the rest of De Palma’s work so perversely effective. The humor doesn’t lessen the shock, but rather enhances it by keeping the audience continually caught off guard. He takes the most vulnerable and receptive of human reactions—laughter, fear, and anticipation—and pushes them to their extremes until the audience is caught up in giddy bewilderment. You don’t know what the director is going to pull next, so you can’t prepare yourself.

De Palma is nothing if not a visceral filmmaker, and in his comfort with the comic and the horrific, he resembles Roman Polanski more than he does Hitchcock. Taking into consideration their mutually varied filmographies and how they’ve been received, it seems a more apt comparison. The one major difference is that Polanski has a deep sense of the tragic, and almost always ends on that note. Not so much De Palma. In the final scene in Sisters, we find Charles Durning’s private dick, who had all but disappeared from the movie, high up on a telephone pole dressed as an electrician, dutifully watching a couch through a pair of binoculars. The movie is over in every way—the blood has been shed, the mystery has been solved, and the suspense is gone—except that it apparently isn’t. De Palma wants to leave us with something else. So we have Durning waiting to see who comes to get the couch. Which, of course, will never happen. So he waits. A cow comes along and nudges the couch with her nose, until a farmer comes to get her. Ominous music plays, but seemingly not to anticipate any scares. This could well be that Shock Recovery Period that the movie posters promoted.