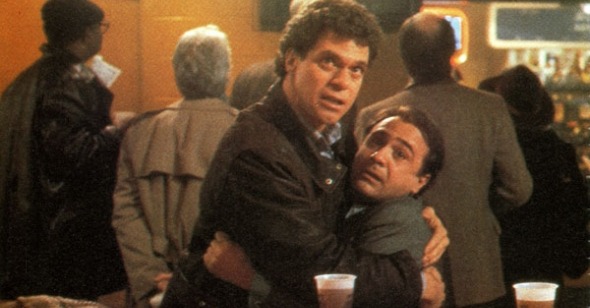 Wise Guys (1986) is probably the least regarded movie that Brian De Palma has ever made, but it’s far from the worst (hello, Bonfire of the Vanities!). This simple left-to-right narrative about a couple of dum-dum, low-level Joisey goons (Joe Piscopo as Moe and Danny DeVito as Harry) who high tail it to Las Vegas (in a stolen Cadillac—a staple of any Eighties farce) after blowing mob money at the track is a serviceable comedy. It’s made in a mostly impersonal mode and is all the better for it. There’s none of the authorial flourish (save for one isolated full-circle pan and a few exaggerated close-ups) that distinguished the titles immediately book-ending it in De Palma’s filmography, Body Double and The Untouchables: no who’s-watching-who gamesmanship, no ostentatious snaky camera moves, no laundry list homages to past masters.

What there is, though, is a decent script, by veteran high-concept mongers George Gallo (Midnight Run) and Norman Steinberg (My Favorite Year), something that can’t really be claimed of many of the director’s more celebrated works, from The Fury (telekinetic kids being chased for some reason) through Scarface (“In America, first you get the money,” etc. ad nauseam, yawn) to (cough) Mission to Mars (which I dislike, thus apparently disqualifying me from liking movies, as per Armond White). De Palma’s most ardent supporters have always claimed that their hero’s style was enough to overcome the narrative deficiencies of his films—that the nagging suspicion that his movies could be reduced to a set of bravura set pieces in lieu of compelling storyline was, in fact, the point. Indeed, I can’t remember exactly what happened in The Fury, but I know that John Cassavetes got blowed up good; I can’t recall exactly why John Lithgow was lurking around during Blow Out, but I’ll never forget his expression as he tiptoed through the toilets.

Wise Guys contains nothing to rate with the dizzying heights of which De Palma is capable—everything from Carrie through Blow Out has at least one or two fantastic bits—but it inspires a kind of affection that the rest of the director’s cold-blooded canon rarely manages. It puts Harry and Moe through the slapstick wringer and (briefly) at each other’s throats, but it also lets them exist as people rather than props in an elaborate technical exercise. Piscopo, whose transition from hot young comic to late-night punchline created the template for many a Saturday Night Live successor, does something difficult as Moe, the dimmer of the pair: he inhabits, rather than approximates, stupidity. His naiveté genuinely reaches his eyes. And DeVito, who has always smartly played his physical characteristics against his performing strengths (he’s a snake-oil charmer in a stunted henchman’s body), makes for a very amusing bigger-brother type: if the film is something of an antecedent to Dumb and Dumber, then he’s the Jeff Daniels to his co-star’s less-manic Jim Carrey, more cognizant of their shared flunky status and protective of his pal, even as he’s dwarfed by him.

When the film was released, the most positive notices (including Roger Ebert’s) were directed at “Captain” Lou Albano, the WWF star and Cindy Lauper attaché who plays the film’s main villain, Fixer, a hysterically angry assassin assigned to kill Harry and Moe after they clue in that their boss (Dan Hedaya) has been trying to get them to off each other. Albano’s got a suitably Bluto-ish bluster and De Palma uses clever angles to accentuate his hugeness; he looks like he could rip his way out of the film frame. It’s especially funny when he menaces DeVito—it’s like watching a burly child facing down a rhinoceros. (You can bet that the Coen brothers were taking notes when they conceived the Lone Biker of the Apocalypse in Raising Arizona.)

Fixer’s manic pursuit of Harry and Moe gives the film its shape, as the early comic vignettes—cute one-offs that demonstrate just how low our heroes are on the underworld food chain—give way to a full-on chase movie trajectory. As the film’s detractors have pointed out, the second half, which unfolds in Las Vegas —specifically in a lavish casino overseen by an uncharacteristically restrained Harvey Keitel—is antic and over-busy, but it’s also un-weighted by the usual De Palma baggage. Recall, if you will, the director’s other bit of casino-set intrigue, Snake Eyes. Yes, that first shot is a stunner—there’s no take in Wise Guys that’s half as long, or even a fraction as complicated—but David Koepp’s script is such a limp inventory of obvious twists, telegraphed conspiracies, and soggy motivations, that exhilaration congeals into exhaustion. Wise Guys doesn’t need to live up to a would-be-Wellesian opening; it’s not the least bit “operatic.” (But then, are De Palma’s other films really operatic if they only consist of arias? Whither libretto?) It’s not worth overrating Wise Guys—a few nice performances, some galumphing energy and a general air of sweetness don’t equal a classic—but its degraded status a neuter among dick-swinging declarations of aesthetic intent is unfortunate. Its payoffs are modest, but it’s no rip-off—it provides an appropriate return on a minimal investment.