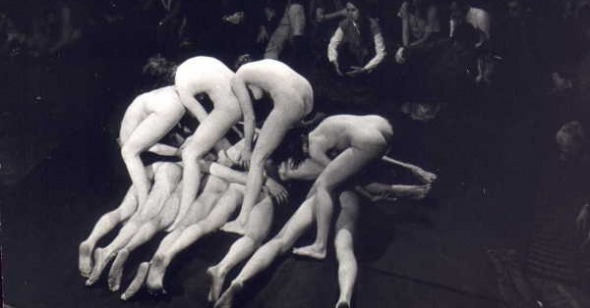 Why do people go to the theater? For centuries there was a social aspect involved, and something primal in the idea of a group gathered together to create some kind of event. In the twentieth century, the fourth wall began to solidify, separating the audience from the performers and keeping them safe from interaction or participation. Towards the end of the Sixties, there was a renewed interest in older theater models, a burst of avant-garde performance based in part on the teachings of Jerzy Grotowski and Antonin Artaud's earlier theories. An explosion of drugs, sex and trance-like music invaded Off-Off Broadway, exemplified by Richard Schechner's Euripides adaptation Dionysus in ‘69, played in a converted garage on Wooster Street. This production so impressed Brian De Palma that he invested a lot of his own money trying to make a filmed record of the performance, and he spent two years on the project, mainly because he wanted to utilize split-screens in order to replicate the play’s open-ended freedom. Whatever one thinks of De Palma, and opinions run the gamut, he is certainly the master of the split screen (his only rival, Abel Gance, tended to use split screens solely for spectacle, whereas De Palma uses it to open up the idea of filmic space).

You can sense the fear in even these free-spirited performers before their plunge into polyamorous sexuality, and De Palma (with his other cameraman, Robert Fiore) eases their burden visually by focusing on their flesh as it blurs and blends together in writhing close-ups. After a while, the sexual freedom on display starts to feel convincingly utopian. Sometimes the actors strip naked, but nothing hardcore happens: the penises stay soft, as in Jack Smith's Flaming Creatures, and the physical explorations are always gentle and caressing. These people are looking for connection, and their sexuality feels stirringly pure, almost childlike.

The main drama of Schechner’s adaptation is a standoff between Dionysus (William Finley) and Pentheus (William Shephard). The skinny, vocally resonant Finley continually addresses Shephard by his real name, rejecting the artifice of theatrical distance, which has the Brechtian effect of making the ideas he throws around seem even more theatrically powerful. Finley invokes any authority figure one can become enslaved to: he is alternately God, the President, a lover. He kisses Shephard long and lingeringly, introducing him to forbidden pleasure. Seduction is ever present and it comes in many forms: Shephard takes a girl from the audience and begins to make out with her, and they slowly build on this until they are hungrily rolling around together on the floor. When De Palma shows us the audience, some of them look uncomfortable, of course, but it's instructive how many of them are open to such sensual interaction with the performers.

Dionysus touchingly captures the innocent, let-it-all-hang-out hopes of the Sixties. In the same period, De Palma made the comedy Hi, Mom!, whose brutal “Be Black, Baby” segment satirizes the participatory theater experience we see in Dionysus. This may suggest that De Palma celebrates only to get enough information for mockery, but the director has retained some affection for Dionysus: In a 1975 interview from the magazine Cinefantastique, he said, “I always feel that even though the film didn't make any money, it was something that should have been done. I think it will live long, long after some of my other movies.” I agree. Dionysus is not just a curiosity or a record of a lost time—though based on a theater performance, it is a beautifully made guide to sexual/cinematic nirvana, and still too little seen.