Jonas Mekas’s A Letter from Greenpoint 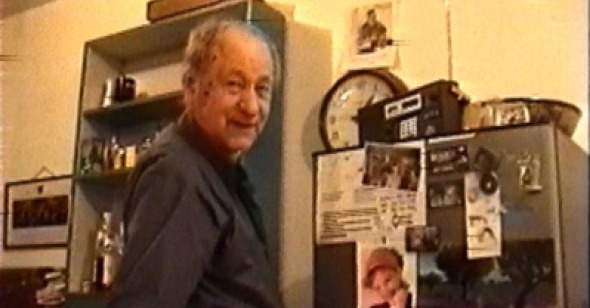 In fifty years of tooling around, Jonas Mekas hasn’t changed his groove. Once the Super 8 camera provided him with the means to capture New York in all its gritty permutations, and now the mobility of cheap digital technology has made this goal even easier. Writing in his film column for the Village Voice in 1963, Mekas predicted that “the day is close when the 8mm home movie footage will be collected and appreciated as beautiful folk art, like songs and the lyrical poetry that was created by the people.” More than a prophetic statement, it was a declaration of aesthetic intent. Ever the fierce guardian of independent cinema, shielding it from the deleterious pressures of studio product, Mekas recognized cinematic redemption in the formal properties of thriftiness.

Once an immigrant, always an immigrant: Mekas’s self-portrait in the 2004 diary film A Letter from Greenpoint instigates a retroactive dialogue with 1972’s Reminiscences of a Journey to Lithuania, the filmmaker’s account of his resettlement (with brother Adolfas) in Williamsburg, Brooklyn, after leaving Europe following World War II, and his trip back to the humble village of his birth. In Greenpoint, the octogenarian Mekas undergoes another exile—from his high-priced apartment in downtown Manhattan to a cozier abode in Greenpoint, Brooklyn, barely a few blocks from his original home in America. Now shooting on a lightweight digital camera, Mekas documents—and poeticizes—his freshly adopted environment.

Hardly an exacting cinematographer, Mekas benefits from the adaptability of the digital format, which he has implemented in his work since the late Eighties. He calls Greenpoint his “first real video work,” due to the obvious comfort he now feels with the medium. From the early moments where he packages up his old home to later sequences shot throughout Brooklyn, Mekas uses digital video to record intimate moments between him and his colleagues; because he’s less a documentarian than an experimental filmmaker, Mekas’s subjects (himself included) appear at ease around the presence of his camera. Hence, he reveals both riotous behavior in local bars (where the lighting is so low that no film camera could ever illuminate the room without the unnatural burst of halogen assistance) and manages to converse with his recording device in the privacy of his home as though it were a cherished companion.

Greenpoint unfolds in chronological sequences, beginning in Mekas’s Manhattan apartment before abruptly cutting to his new pad across the river. Hardly a stylist, Mekas doesn’t use an exterior soundtrack, fanciful editing, or really anything associated with conventional filmmaking. As the audience’s guide, he merely selects various recorded incidents and lets them unfold as he experienced them. While no single instant reveals the big picture, viewed sequentially they depict a fervent man driven by the sheer excitement of day-to-day living. Early on, he paces through his longtime residence on the cusp of Soho, holding the camera to give us a first-person account, and glances out at the changing times. Reaching the window, we see the dark street below and small patches of whiteness in the distance. “It’s snowing,” he notes with a vague sense of surprise, casually acknowledging the randomness of life, his voice echoing in the empty room. (Isolated, it’s a meaningless observation, but later scenes divulge its larger significance.) Mekas’s gradual comfort in Greenpoint coalesces in a series of disconnected moments pulled together into a tapestry of dialogues and natural encounters. Digital video is his investigatory key, employed to unlock the transient nature of his existence. Film once allowed Mekas to confine memories to a personalized canvas, but the pixel has replaced celluloid in his documentations of time passing, quite simply because his diaries reflect the changing times.

In a YouTube video filmed by Mekas during a social outing with Harmony Korine last year, the Gummo director recalls Mekas’s disinterest in visual clarity. “He’d set the camera down on the edge of some magazines,” Korine says. “He would always put it on the edge so it would get a little bit of a wobble. It couldn’t be that steady.” Nowhere is that approach more apparent than in A Letter from Greenpoint, where Mekas’s frame seems to shake even when the camera is stationary. Mekas’s acceptance of his own shoddy camera work enables him to relax with the freeness that his diary films have always embraced. He often speaks directly to the camera, in extreme close-ups, delivering cosmic stream-of-consciousness monologues on a variety of topics that elevate Greenpoint from a collage of home videos to a distinctive representation of his mindset. Much like his four-hour, decade-spanning opus As I Was Moving Ahead Occasionally I Saw Brief Glimpses of Beauty (2000), Mekas combines his whimsical ruminations with sidelong glances of his life.

Home alone with his camera, he devours a hardboiled egg while breaking it down into an analogy for the various layers of society, portraying the world as a complicated realm of self-interests (“But it’s so good,” he notes, taking a bite). Busting out his frayed accordion, Mekas conducts an excruciatingly unharmonious tune, building to a solemn impromptu chorus marked by his mantra-like chanting, “My friends don’t sing anymore!” This grippingly honest representation of his inner despair is possible thanks to digital video, the mobility of which allows it a continued relationship with the home video aesthetic.

Greenpoint is hardly unstructured or devoid of creative guidance. On a purely formal level, Mekas provides occasional reminders that he’s delivering a package of mediated incidents—particularly in a scene when he strolls down the street after a late-night drinking session and the Lithuanian conversation he’s having with his pals is translated with subtitles. However, it’s Mekas’s ability to use the camera in virtually every space of his regular routine—from local bars to his office at Anthology Film Archives—that gives Greenpoint its feeling of completeness. The experience of Greenpoint is that thorough, that difficult to shake; as with most avant-garde works, a single viewing rewards you with a richly memorable clutter of ideas, and a deep sympathy for Mekas’s perseverance.

In the closing scene, Mekas once again benefits from the durability of digital video in a room devoid of light, addressing the camera from his bedroom in the wee hours of the morning. “I can’t sleep,” he mutters over and over, in case you forgot that his momentum, a product of the precise radical creativity associated with the Beat generation, remains unstoppable.