I’m Not There / Falling from Grace 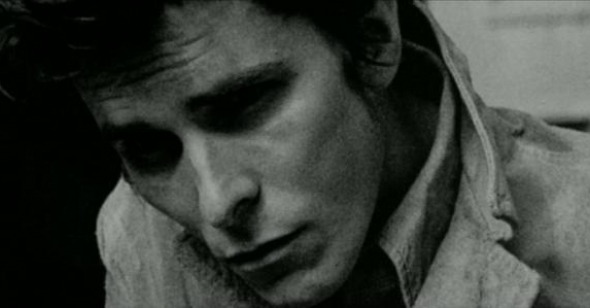 This is especially the case when such films tackle the titans of the music industry. More than ever studio musical biopics reinforce myth in films like Walk the Line and Ray, perfunctory celluloid encomiums to recently deceased stars; meanwhile indies like Last Days and Control go the opposite route by refracting and often abrasively exploding any possible deification of their tragic subjects. A moral obligation to truly express the complexity and contradictions of the person behind the icon acts as a major impetus for these latter films, yet one also senses a fair amount of territorialism at play: the hipper the legend—and few remain as simultaneously well-known and hip as Last Days’ Kurt Cobain and Control’s Ian Curtis—the more important it is that they be provided respectable cinematic treatment by “one of their own.” (Gus Vant Sant, et al).

Todd Haynes’ 2007 anti-biopic I’m Not There forges a particularly strong bond between responsible, self-aware director and dense, multifaceted subject. It is a film “about” Bob Dylan only in the most qualified sense: six different actors, including an eleven-year-old African-American boy and a woman in drag, play six different Dylan incarnations, none named Bob Dylan. Dylan himself—who throughout a storied career has produced unconventional movie projects of his own (Renaldo and Clara, Masked and Anonymous)—granted Haynes permission to adapt his life (or “many lives,” as per I’m Not There’s tagline) for the screen, the first time he ever gave such a blessing. One understands why: the splintered narrative, heterogeneous style (Godard, Fellini, Pennebaker, and others are invoked), and poetic rather than linear structure of I’m Not There confounded many, but according to critical consensus “did justice” to Dylan. This was considered a triumph—if any American musician of the last century deserved respect from and within the cinema, it was playful, protean Robert Zimmerman.

Few films would appear as antithetical to I’m Not There as the blandly titled Falling from Grace, a straightforward, low-budget (actually nearly one-seventh the cost of I’m Not There) drama from 1992 directed by and starring John Cougar Mellencamp. At first glance the film isn’t a biopic but one of those awkward vehicles ostensibly left in the dust by an art film such as I’m Not There, a modest studio-backed undertaking designed to transition its star from the recording studio to the soundstage—in other words, just another brand of cinematic mythmaking. Based on a Larry McMurtry screenplay, Falling from Grace has Mellencamp playing a part close to his public persona: Bud Parks, a music legend who returns from Los Angeles to his small Indiana hometown (Seymour as the fictional Doak City) and undergoes a midlife crisis when reunited with his dysfunctional family and former sweetheart. Audiences were meant to be reminded of the melancholic strains of Mellencamp’s heartland Top 40 hit—“Life goes on/Long after the thrill of living is gone”—but could be excused for mistaking the film for image-conscious vanity: a country music icon solidifying his working-class hero credentials in a big screen rags-to-riches-to-rags role.

I’m Not There converges with Falling from Grace in a single respect that illuminates the difference between them, and the surprising superiority of the latter film. In both films music itself is secondary, the fruits of the creative process important only in regard to the artist-subject’s personal integrity and authenticity. Like the real-life figure, Dylan’s various incarnations in I’m Not There each attempt to find the right persona or “voice” to express the ever-changing self. Often the chosen voice is ill-fitting: the young, train-hopping Woody (Marcus Carl Franklin) awakes to the hollowness of imitating his idolized namesake (Guthrie) when he’s advised to “live his own time” by a middle-aged black woman who chides him for making a pose of Depression era folksiness; Jack (Christian Bale) rebels against the “protest singer” label to which he’s wedded, lashing out against the liberal organizations that exploit him for their causes; a movie-star version of Dylan named Robbie (Heath Ledger) stars in a film deemed phony by wife Claire (Charlotte Gainsbourg), who (in a line of dialogue lifted directly from Masculin féminin) thinks that “It wasn’t the film they had dreamed, the film they had imagined and discussed, the film they each wanted to live.” Instead of being the main attraction, Dylan’s songs—whether original recordings or cover versions—form a backdrop against which the legend’s avatars don successive, dissatisfying cloaks while constantly in search of an unfixable and illusory identity.

In a way Falling from Grace goes even further than I’m Not There in refusing to oversell its director-superstar, a man at the time coming off five straight platinum or multiple-platinum records: the film features just two Mellencamp songs on its soundtrack and lacks a single Mellencamp musical performance. Melodramatic devices certainly offset the dearth of such familiarities: the story has PJ (Kay Lenz), Bud’s old high school flame and current mistress, not only married to the star’s brother (Brent Huff) but also sleeping with their ornery father (Claude Akins), the latter of whom makes a move on Bud’s wife (Mariel Hemingway). The worst country music stereotypes can’t help but come to mind. But Mellencamp’s treatment of this material is surprisingly deft. He not only portrays with striking complexity the unsympathetic and indecisive Bud but also captures the duplicitous lure of small-town rhythms and comforts for a superstar returning home as conquering hero, alienated in his elevation. As Bud breaks up his family by living the passion he may have had with PJ, he develops a bitter, self-destruction drive that’s never entirely explained in Oedipal or even sick-of-the-masquerade terms. Instead Mellencamp emphasizes how hometown ghosts can prey on personal nostalgia, longing, and regret. Above all else in Falling from Grace, the connection of a man to his environment becomes the cause of his destabilized sense of self. Deep roots hold Bud to the earth even as he travels among the stars.

What really separates Falling from Grace from I’m Not There is that the latter takes a postmodern approach toward identity—multivalent, fragmented, conflicted—while the former takes a humanistic one. That both wind up in a similar place—the different aspects to our personalities, they state, often cannot be reconciled with one another nor forced to conform to societal expectations—is almost beside the point. The point is that Mellencamp and McMurtry’s understanding of this dilemma is just as valid as Haynes’, even if Haynes has, predictably, received far greater notice for his efforts. And the irony remains: Mellencamp’s myth-busting tale of lives out of joint possesses so much more soul than Haynes’s glorified thesis film. For all of its structural and stylistic pyrotechnics I’m Not There extracts little knowledge, wisdom, or poetry from each of “the many lives of Bob Dylan,” just a composite impression that the man had to keep moving through them. (Haynes’s take on Dylan’s late-70s conversion to born-again Christianity is especially but also typically superficial. Bale simply mumbles about popular music being the tool of the devil—again, the old vessel for expression is deemed corrupt and obsolete—and sings the gospel hymn “Pressing On.” Almost nothing of Dylan’s lifelong interest in biblical themes and symbolism is remotely touched on or elucidated.) With Falling from Grace I felt I learned something not only about the anxiety of Bud Parks, but also about the character and concerns of Mellencamp—of whom, unlike Dylan, I know virtually nothing. I don’t know if Mellencamp ever “lived” the Bud Parks story, but I believe that he deeply feels it, that he knows something disorienting and painful about the rift between international stardom and regional loyalties, public success and personal dissatisfaction.

The lesson here isn’t only that an old-fashioned, one-thing-at-a-time depiction of creative celebrity like Falling from Grace is more “lived-in” than the fractured, genre- and style-hopping I’m Not There. It’s also that what indie audiences often consider the ambitious indie’s inherent refusal of myth can be just another myth. “There’s no politics,” proclaims Robbie in I’m Not There. What does Robbie believe there is, then? “Sign language.” Haynes, however, believes very strongly in the political significance of all art, and in I’m Not There uses Robbie and fellow Dylan doppelgangers to demonstrate the results of evading this realization (Robbie’s Blood on the Tracks–era Dylan, for instance, slides into selfishness, misogyny, and vacuous cynicism after betraying his rebellious ideals). Thus Dylan becomes a representational marker in a system that ultimately raises the politically committed director above his over-mythologized subject. It’s a clever bait-and-switch, but no more unconventional or subversive—and considerably less multi-dimensional—than the deep-rooted commitment to character and place in Falling from Grace, a film that complicates myth by exploring the different sides of a single protagonist who cannot be reduced to a “sign.”