The Squid and the Whale / Men Don't Leave 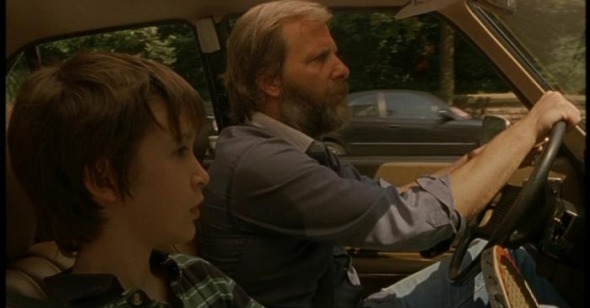 To begin with an admittedly eyebrow-testing proposition: Noah Baumbach’s The Squid and the Whale belongs in the “body horror” genre as surely as anything by David Cronenberg. For Baumbach, family is defined as the people who are witness to the humiliating moments stricken from your public persona, and so this extraordinarily close-quartered movie is coated with the embarrassing secretions of the polished, published, and articulate. At the family meeting where 16-year-old Walt (Jesse Eisenberg) and 12-year-old Frank (Owen Kline) already know their parents are going to announce their divorce, the moment is drawn out agonizingly: father Bernard (Jeff Daniels) and the boys waiting on the couch for mother Joan (Laura Linney) to come out of the bathroom, which she does, announced by a flush and greeted with crinkled noses. “Mom!” “Sorry.”

Family members, especially in the city, live on top of each other. One major practical consequence of this is that, if you’re just learning how to masturbate, you’re not doing so nearly as privately as you think. The Squid and the Whale’s frankest plotline concerns the inevitable discovery of Frank’s improvised, wildly disconcerting relationship to his own splooge, and this engagement with the body at its most mortifying is one of the places where the American independent film has run with the ball handed off to it by the middlebrow studio drama of previous decades. Compare it with another movie in which a would-be man-of-the-house teen and his kid brother adjust to single parenting in an unfamiliar urban setting: Paul Brickman’s Risky Business follow-up Men Don’t Leave, which Warner Brothers released in 1990, fifteen years before Sony and Samuel Goldwyn bought Squid out of Sundance.

In the earlier film, young Matt’s unsupervised precocity takes the form of petty appliance theft—a bit more sanitary, and a bit less likely, than humping the shelves in the school library and hiding the byproduct in a book, as Frank does. Meanwhile, teenaged Chris’s far more successful courtship of a twentysomething seductress is cut short by a fade to black. This means we don’t get to see how bad a kisser Chris is, which we certainly do with Walt. Long before The Social Network came out, Jesse Eisenberg had already played in a sequence best described as “the facemash scene”—I’m thinking of Walt’s awkward, neck-twisting lip-lock with poor Sophie (Halley Feiffer), who doesn’t seem to mind, actually, any more than she minds when Walt spurts off at first contact. (Walt can’t control his bodily functions—neither can anyone else. When he tries to make a move on Anna Paquin’s Lili, his father’s seemingly sexually available student, he hits her nose with his head, drawing blood; later, her nose starts to run as she kisses Bernard.)

There are a number of reasons Walt breaks up with Sophie—mostly obviously to live up to Bernard’s self-serving ideal of youthful sexual prowess, but also, perhaps, because he can’t stand Sophie knowing that he’s a work in progress. It’s easier to cultivate the image of a fully formed adult, by plagiarizing his dad’s sophisticated opinions, or claiming Roger Waters’s lyrics at his own at a school talent show. The end of The Squid and the Whale is hopeful because Walt is at last able to contemplate his childhood with mom and dad demythologized—with understanding that Bernard, as much as any teenager, might be walked in on in a moment of pathetic sexual need.

Cinematographer Robert Yeoman stays close to the characters—a necessary visual strategy for a relatively shoestring 80s-set period piece that couldn’t clear Park Slope’s streets of contemporary cars (there are no establishing shots in The Squid at the Whale, as there would be none in Margot at the Wedding). We’re trapped in an intimate relationship with these people. The never impersonal perspective is evident, too, in the disorienting rush of the editing, which is as knife’s-edgy as the abrupt dialogue (unlike in most movies about “literate” people, scene partners don’t engage in a sustained rally: they brutally swat ground strokes past each other). People, places, and moments exist in almost uncomfortably vital proximity, spatial and temporal.

It’s this assured, purposeful sense of pacing that’s missing from certain of the even tinier productions The Squid and the Whale, with its emphasis on character sketches over character arcs, perhaps heralded. As the system of bonds and presales which once financed smaller-scale films collapses, the American indie has been superseded by the mostly self-financed microindie film. It’s easy to imagine a sequel to this symposium, ten years hence, pairing Squid, with name actors playing its graphic autobiographical content, to some or other (far more slackly assembled) iteration of Joe Swanberg’s sexual obsessions as enacted by his Facebook friends.

Baumbach apparently admires Swanberg—presumably he’s pleased enough with the spiritual kinship to overlook the kind of obvious differences that explain how it’s not merely some unvarnished ideal of honesty per se that gives Squid its legs. I’ll defend to the point of dire, skull-grinding tedium the truth and even beauty of inarticulacy in the movies, but mumbling, even at its most artful, is hardly a patch on Baumbach’s writing, at once a deft pleasure and pointedly, revealingly pretentious, thanks especially to Jeff Daniels’s overenunciating (“Mon-ica Vee-tee”). Baumbach’s evident ambivalence towards his characters is without easy precedent or heir. It’s there even in the heartbreaking end-credits accompaniment—“The Swimming Song,” by Loudon Wainwright III, a divorced dad and the subject of his daughter Martha’s song “Bloody Mother Fucking Asshole.”

Dad’s not an asshole in Men Don’t Leave, a movie not about divorce, but rather widowhood—Hollywood did always seem to view death as the cleanest, most appropriate way of splitting a couple up. And indeed, it’s initially difficult to confirm that the film has a contemporary setting: the opening voiceover, from the family’s youngest member, lays on the hearth-and-home flashback thick (“What I remember most…”), and accompanies footage of elementary school-aged Matt Macauley (go-to ’90 and ’91 prepubescent Charlie Korsmo, in his first film role) running home through the snow, alongside a freight train.

The Macauley boys are all handy—Matt is building a doghouse complete with electric doorbell—and hearty, grabbing food off the breakfast table with a quip to Mom and, in the case of high school–aged Chris (Chris O’Donnell) bouncing a basketball through the house. They all wear dungarees, and mother Beth (Jessica Lange) wears an apron while cooking the dinner that goes cold as dad takes the boys out to his construction site.

The first reel is all soft-focus lawns and high blue skies, with a plinky Thomas Newman score that prefigures his work on American Beauty—though suburbia is perhaps even more conspicuously idyllic here, as there are enough neighborhood kids to get a soccer game going outside the house where the adults are holding a wake (they’re all still wearing their little suits).

Even on the brink of Homicide: Life of the Street, the Baltimore to which Beth relocates her family reads as merely “the big city,” a mostly white place whose stresses are symbolized by a small apartment with a kitchen window that won’t open and no a/c. But the city is also a place where experimental music ensembles play the film’s score; Beth meets sensitive multi-instrumentalist Charles (Arliss Howard), who takes her to blues clubs and polka dances, until her submerged grief manifests as alternating bouts of catatonia and baking.

Brickman, unlike Baumbach, treats family trauma as a private affair, as the coping Macauleys spiral off in different directions, largely oblivious to one another. O’Donnell (in his first film role; the next year producer Jon Avnet would cast him in Fried Green Tomatoes) bizarrely ends up in a Vertigo riff as Chris takes up with a kooky neighbor, an X-ray tech played by Joan Cusack, doing sweet-unhinged reflections as she altruistically initiates him into sex, and switches out his washer-stretched Smiths t-shirt for several Nautica polos. Meanwhile, his younger brother descends into delinquency, at first standing lookout as a classmate lifts some Milk Duds, and then breaking into houses to rip off VCRs, fencing them (to a young Kevin Corrigan) in a scheme to raise money for lottery tickets.

Men Don’t Leave’s relationship to reality is purely gestural. Beth’s first kiss with Charles is interrupted when her nose, like Lili’s, starts to bleed—a startling moment, not least because her sex life, especially compared to Joan Berkman’s, is so chaste, and because the movie otherwise protects its characters from that type of self-exposure. The film signifies emotion and development with a sort of symbolic kabuki vocabulary left over from the studio Golden Age—Beth finds a way back out of poverty by reinventing herself as a home-cooking entrepreneur, like Mildred Pierce or Claudette Colbert in the first Imitation of Life.

At the film’s climax, Matt—distraught at being cut out of the million-dollar lotto drawing by his prepubescent partner in crime—races, like Walt at the end of The Squid and the Whale, back to the moment when it all made sense, in this case, alongside the train tracks again and back to his childhood home. He can’t stay—but does deliver a bookending voiceover, in past tense again, as Brickman replaces Matt’s perfect ‘50s-esque childhood with an improvised, urban, modern family, who do generic things like go paddle-boating. Men Don’t Leave tries to smash old false idols, with a toolkit of nothing but the vague, allusive rhetoric of an earlier, idolized time; what’s required is a more brutally direct language. “Put me in your mouth,” Walt hears his revered father beg Lili in The Squid and the Whale—how’s that for too sullied flesh?