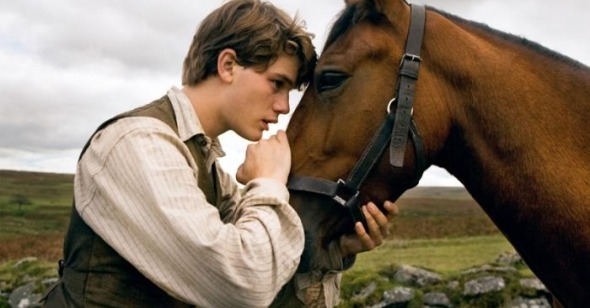 Michael Morpurgo’s young-adult novel War Horse, from which Steven Spielberg’s film is adapted, is told from the point of view of the thoroughbred Joey. The animal relates to the reader of his earliest memories, of losing his mother in an auction, of being dragged and roped and trained, of having his face dabbed with salt water, of kindness and tragedy. In children’s literature, this perspective is not at all unusual—rather, it’s the sort of anthropomorphism one finds throughout such works as The Call of the Wild, Watership Down, and especially in Anna Sewell’s Black Beauty, narrated in the first-person (first horse?). It’s a tactic that seeks from the reader a special kind of empathy, a way of looking beyond himself and his supposed dominion. Steven Spielberg has always been especially adept at obtaining a similar empathy from his viewers, whether it’s for a squashy space-man with piggy feet and a voice suspiciously like Debra Winger’s, or a robo-boy who can only feel because his circuits have approximated it. And if there’s anything Spielberg seems to love more than the only superficially inhuman, it’s the lost, the discarded, the helpless who must depend on the kindness of strangers.

It’s somewhat surprising, then, that Spielberg’s version of Joey—an animal torn from his loving owner, sent off to battle, and subject to the whims of a series of benevolent or cruel masters—comes across as a supporting character in his own narrative. It’s clear very early in this episodic, rangy film that Spielberg will not be investing in Joey as he did with his more expressive inhuman protagonists (for one thing, as he’s a horse, it’s often difficult to catch both of his eyes in the same shot), and that he will be only as important to the tale as the humans he comes in contact with. In this sense, Joey is like a blockbuster version of Bresson’s Balthazar—a patient witness to joy and terror, who only gets dangerously excited when pushed to extremes.

A more aesthetically appropriate comparison is probably Lassie, who in Fred M. Wilcox’s lush 1943 Lassie Come Home, runs away from her new home and braves a perilous journey back to Yorkshire to reunite with her owner. It’s this film that War Horse perhaps most resembles in its resplendent opening hour, in which, surrounded by the emerald, rolling hills of Devon, Joey’s faithful cobalt-eyed friend, farmer’s son Albert (Jeremy Irvine), affectionately rough-houses with the animal in a manner more befitting a collie. Irvine, sparkly, earnest, and robust, has a likable enough bearing, but he’s no Roddy McDowall: in place of the tremulous, gangly emotional transparency of the latter in Lassie, Irvine gives off a generic farm-boy radiance. He’s something of a cipher, perpetually wide-eyed, taking in every moment as though it was his first or last—which might make more sense if this late teen were prepubescent. Thus the complex adolescence that formed the center of Spielberg’s E.T. the Extra-Terrestrial (Henry Thomas makes Elliott’s growing wisdom into a succession of nervous tics and stammers) and Empire of the Sun (Christian Bale plays haughty Jim Graham’s British diplomatic entitlement as a shield against a world he doesn’t yet understand) is replaced by a flat asexuality—he seems more like a painting of a handsome lad than a boy with his own frustrations and madnesses about to be forced into adulthood.

This is maybe because Spielberg is working, more than in those two prior films, and perhaps more than in any other film he’s ever made, in a surreally storybook register. The brief pre-title images of a just-born baby foal taking its first steps are right out of Bambi; the presentation of the hard-scrabble farm life of the Narracott family, with sun-dappled shots of mother Rose (Emily Watson) uprooting carrots and father Ted (Peter Mullan) plowing the fields, is less grittily real than it is reminiscent of something like Charlotte’s Web: there’s even a goofy goose who likes to chase intruders off the property, including mean old landlord Lyons (David Thewlis). To enhance this bucolic vision, Spielberg makes his most blatant dive into golden-age-of-film territory. It’s clear before the first reel is done that this project must have appealed to Spielberg first and foremost as a throwback to a type of outmoded filmmaking—with its glibly down-home sentiment (there’s a seemingly endless arsenal low-angles of the Narracotts in front of the homestead), it’s like The Wizard of Oz before the tornado hits, with Devon standing in so well for Kansas that it’s easy to forget we’re technically not watching a western. The influence of directors like Ford (and Lean and Hitchcock) has always been cited throughout Spielberg’s career, but rarely to the point of quotation. War Horse finds Spielberg doing his best Ford imitation: it’s no surprise that the result is often thrilling, with classic Spielbergian heart-in-throat crescendos and catharses strewn about. It’s also, by virtue of seeming more like an experiment, sometimes missing the gravitas one would associate with the director’s other grand epics. It’s not the first time Spielberg has looked backwards, but it’s his first film that—regardless of the fact it was the first digitally edited Spielberg film after years of his sticking to the flatbed—feels like an instant antique.

War Horse is perhaps the most extreme example of Spielberg’s ongoing tendency to envision films in terms of standalone set pieces. Since our equine protagonist is passed off from one temporary owner to the next, and he feels like more of a tour guide than a character adequately binding together the film’s elements into a cohesive emotional experience, the film easily wears the crown as the director’s most episodic narrative. Once Joey is sold in 1914 to the British Captain Nicholls (an unblinking, unsettlingly earnest Tom Hiddleston, who, with his delicate features yet solidly upstanding bearing, seems to have had as fine breeding as Joey) and taken to help the Allies stave off the German advance, Spielberg pulls out all the stops in delivering the type of thunderous battle sequences we’ve come to expect, though holding back from the kind of explicit, realistic violence he purposely zeroed in on with Schindler’s List and Saving Private Ryan. Here we get executions elegantly obscured by spinning windmills and evocations of death as absence (Nicholls’s exit from the story indicated by a shot of Joey racing across a field, mid-skirmish, with a suddenly empty saddle). The depiction of war in this film feels more illustrative than instructive, as was the tendency of those films mentioned above. If the film doesn’t attain the mythic grandeur it seems to aim for, it does paint an affecting picture of the World War I trenches as a graveyard of young, now and perhaps forever lost, souls. It’s the stuff of movies, perhaps, of All Quiet on the Western Front and Sergeant York, but it has a ghostly bearing nevertheless.

It’s as a combat film that War Horse could both find its greatest praise and come under its closest scrutiny. With his usual crackerjack crew of cinematographer Janusz Kaminski, editor Michael Kahn, and sound designer Gary Rydstrom, Spielberg creates sequences of propulsive excitement, each gunshot and explosion hitting the audience with enough vivid visual and aural audacity to make the audience cower. Yet, especially as compared to Saving Private Ryan, the war scenes here seem like flourish, all of a piece with the grandiloquence of the early scenes of idyll and the climactic Gone with the Wind–cribbed burnished-gold homecoming. From Ford, Spielberg gets his brand of visual elegance and composition, the ability to relate a potentially complicated development with one or two cinematic “brushstrokes,” but Spielberg’s sense of scale has always been all his own. This is where his penchant for bigger-than-life extravagance, his need for the grand gesture, can seem at odds with that preternatural ability to distill complex emotions to a single image.

Spielberg can stop a movie cold, and brilliantly (remember the story about the Cannes festival audience leaping to their feet for an ovation when those bikes ascended into the sky in E.T.?), but when the highs and lows are so sharply marked then the film can become oddly enervating. In War Horse highs are often relegated to sequences and shots, while entire characters feel like afterthoughts. So we’ll have a brief scene of such visual majesty as a troupe of a British cavalry slicing through a golden wheat field in Quiévrechain en route to a sneak attack on a German encampment (not simply a beautiful image but a lyrical illustration of violence in nature, as well as a clever echo of The Lost World’s image of the raptors cutting through tall grass, acknowledging our heroes as potential aggressors). And then we have an excruciatingly extended stay at a French farmhouse with grizzly grand-père (Niels Arestrup) and his fresh-as-milk pride and joy, Emilie (Celine Buckens, whose rosebud haughtiness feels entirely too polished and modern), seemingly because Spielberg feels the audience needs to cool its jets for a bit before the next big explosion. Much Heidi-esque banter and monologing about carrier pigeons ensues. Emilie and her grandfather turn out to be essential to the narrative, but only in a way that proves them to have been devices all along.

Here and elsewhere, Joey gets lost, not just in the devastated landscape but also in the narrative. One begins to wonder whether, like the infamous misbehaving rubber shark in Jaws, Spielberg had trouble with the horses enlisted to play the protagonist, so elided does the thoroughbred often feel in his own story. It’s more likely that it’s just a matter of Spielberg’s humanism shining through, perhaps at the expense of his own film’s theme. Imagine the fascinating abstraction War Horse might have been had the parade of people who either help or harm Joey on his travels been even more faceless, a vaguely defined gallery of ghosts long gone, as ephemeral as pictures staring out from an old newspaper.

Yet Spielberg is too impressed with human beings’ will to live to go so far as to make us supporting players in a narrative of twentieth-century conflict (those final words from H. G. Wells by way of Morgan Freeman at the end of War of the Worlds expressed that once and for all; and Schindler’s List, Amistad, and Saving Private Ryan are stories of survival, essentially). Nothing so radical here: ultimately we have a meticulous, stridently sentimental approximation of a Hollywood golden-age picture. Yet it’s more than affectionate—it’s elemental, and ultimately too affecting to simply be just another piece of bric-a-brac in a suspiciously nostalgic year filled with movies aping or paying tribute to the past (The Artist, Hugo, Midnight in Paris). Finally, in its outlandishly old-fashioned conclusion, our hearts swell, but it’s probably not for Joey as much as for ourselves, poignantly journeying into the past.