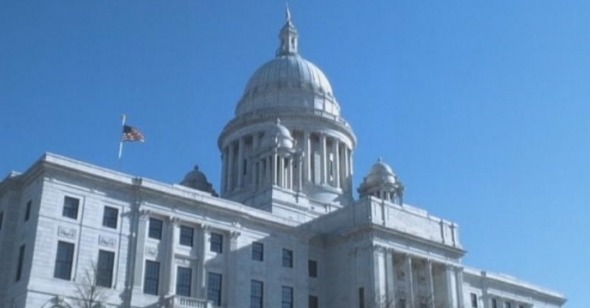 Before talking about Amistad, it’s helpful to identify what it is, and to do so non-pejoratively. It’s known primarily, and roundly rejected in many circles, as the Spielberg Slavery Movie. But it’s more Spielberg’s Mr. Smith Goes to Washington, a tortured but ultimately optimistic look at America Now. Naturally, this could be a hair-raising realization for those many viewers offended by the thought of using the horrors of slavery as a backdrop for what amounts to a cleansing reaffirmation of “essential” American values. It’s a film about morality, of course, but in a jarringly pragmatic way: the 1841 United States v. The Amistad case—concerning a schooner whose crew, Spanish slave-traders, were overtaken and mostly massacred by rebelling Africans kidnapped from their homeland—was first and foremost about property rights. That the outcome of the trial was a good one (the kidnapped men were sent home) makes Amistad a narrative of overcoming (shades of Schindler’s List), not only in terms of these few characters but a retrospective statement about a nation that has struggled to overcome its own heinous past.

The most peculiar contradiction about Spielberg’s film—one of his least financially successful, and least widely admired—is that it’s a talky, often dry, procedural concerned with passionate, visceral subject matter. It stands alone as Spielberg’s only courtroom drama, and as thus is preoccupied with concrete matters that none of his other films are, in terms both historical (that history is a reflection of a given era’s social institutions) and philosophical (that natural law needs to supersede that of the land and government). It opens up to include, and in ways prioritize, a depiction of the abolitionist movement (via Morgan Freeman’s Joadson and Stellan Skarsgard’s Tappan), and thus makes the case a matter of righteousness, most of that righteousness localized in the person of John Quincy Adams (Anthony Hopkins), pleading for the Africans’ freedom to the Supreme Court.

It’s been said that Amistad amounts to little more than an epic example of that clichéd narrative in which whites are called to speak for blacks, and this is necessarily true in trial scenes from the Connecticut courthouse where Roger Baldwin (Matthew McConaughey) rather feebly makes his case to the climactic scenes at the Capitol in which Adams eloquently takes up the slack. Yet despite one too many shots of Cinque (Djimon Hounsou) looking up admiringly at his white defenders, Spielberg and screenwriter David Franzoni seem to realize the insufficiency of this approach, as Amistad is overall concerned with subjugation and identification as they apply to voices and language. In the film’s possibly most oft-referenced (and, by some, most mocked) sequence, the leader of the revolt, the Mende-speaking Cinque, unable to contain his anger and fear any longer, stops the Connecticut proceedings by loudly pleading “Give us free,” using the few English words he has picked up since being held captive on American shores. It’s a rich and resounding idea—a black character refusing to remain sidelined, begging for his voice.

In a sense, it’s also a cinematic corrective, especially provocative considering the controversial first twenty minutes of the film, which plunk viewers down in the middle of the violent skirmish onboard the Amistad, during which Cinque’s Mende dialogue is never translated with subtitles. Especially disturbing is the fact that their Spanish-speaking captors are often afforded this seeming courtesy. The decision—to subtitle the Spaniard villains but not the Mende heroes—is too foregrounded to be an accident; but what does the film gain emotionally or intellectually from it? Some have argued that it leaves the African characters as little more than confused-seeming barking animals, an intimation of racism that, in my opinion, slightly betrays a bias in the viewer; others, famously critic Armond White, praise this choice as a refusal to impress Western language on African characters who stand in for the hundreds of thousands who were to have their languages taken from them. Ultimately, I think this decision (a rare form of audience distancing from Spielberg) is a fascinating and confrontational one, putting English-speaking viewers in the position of dealing with their own predispositions, forcing us to forge connections with the unknown, and a way of reaffirming that it is not our narrative, we are not privileged to it. The first subtitle for an African character comes 23 minutes into the film, when they have arrived on New England shores and one of the men shouts “Chief! Chief!” at a passing black American in starched-collar, “white-man” garb. Cinque quickly corrects his friend: “He’s not your brother.”

A common, and strictly auteurist, argument against these decisions is that it makes Cinque out to be an E.T. of sorts, a lost alien being trying to communicate to find his way home. According to a 1982 interview with Spielberg upon the release of E.T. the Extra-Terrestrial, the director stated that his sci-fi classic was actually first a racial allegory. Perhaps, then, E.T. was intended to be Cinque all along, and not the other way around. —MK 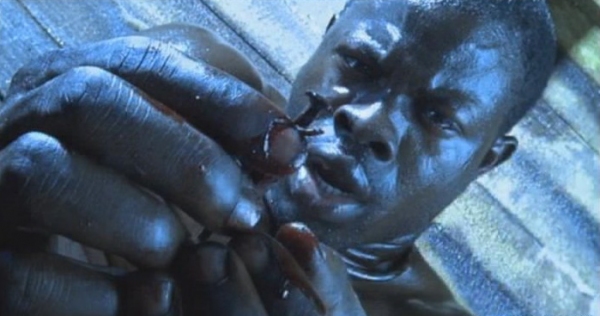 A film that’s considerably more interesting to talk about than watch, Amistad reveals a filmmaker provocatively stretched beyond his comfort zone. Except for the upcoming Lincoln, it’s his only film set in the 19th century, was his first foray into American historical pageantry, and presents a multilingual quandary to beat the band. That Spielberg’s solutions are so often rooted in his own auteurist iconography, not to mention the comforts of Hollywood genre, needn’t be held against him, but this time his Spielbergian touches don’t come off as strengths, but crutches.

Before moving into the realm of courtroom drama, and, yes, an alien-stranded-far-far-away-from-home narrative, the film opens as a horror movie. An avenger breaks loose from chains and savages his captors. He drives a sword straight through a man’s midsection, slowly withdrawing the bloody blade, barking and glowering menacingly above the victim (and us). As a torrential rain pours down his face, lightning flashes on his imposing form as it would on Frankenstein, Jason Voorhees, or Michael Myers. As with those iconic antagonists, not a discernible word is spoken—the blade does all the talking.

You can’t say it’s not a strong choice to begin thusly, to expend with the only real action in the film before the audience has even settled into its seats, to depict such gory violence without any context. But leading with pure action is what the director has always done, most memorably in Jaws, Raiders of the Lost Ark, and Saving Private Ryan. In cinematic terms it’s incredibly effective. In political terms, particularly with a film like Amistad, it can be pretty dicey. Putting the audience on its heels in this situation—to make us feel before we know what we’re feeling, to show action before letting us know what it means, to establish a monster before making him our hero—leaves us with a stubbornly lingering first impression. Why must I first see Cinque as a murderer? Why must I come around to his humanity rather than assume it from the start? We’re robbed of the triumph of the slave revolt, and are instead forced to first feel for the slaughtered captors.

The decision to withhold subtitles for the African dialogue from sea voyage through embarkation is similarly bold, but furthers this opaque distancing strategy, effectively aligning audience sympathy (and attention) with characters we can actually understand—i.e., the white ones. By denying the slaves’ subjectivity, we’ve no choice but to objectify them. Which, again, is tantalizing as a political idea, but this is quickly buried beneath Spielberg’s need to provide sensation and a familiar narrative. The wheels of a courtroom drama go into motion, and movie stars show up with muttonchops, posing under dust-filled shafts of sunlight. Subtitles appear only when the script is ready for our identification to shift—after we’ve met the principal white characters, and after we’ve acclimated ourselves to the multisided legal complications (after a brief appearance of subtitles at the 23-minute mark, it’s an eventful 12 minutes before they appear again). Only the slaves are ruled by this strategy, this notion of voicelessness; only their characters, and our ability to identify with them, are so managed. A potentially powerful statement of subjection, the strategy actually serves to further exploit the Africans: they are representative of experience, not characters whose experiences are afforded the foundational relatability of understood speech. Yet for all of the problems with communication and translation in Amistad, these are the film’s strongest and most provocative themes. When Chiwetel Ejiofor’s Ensign Covey is finally brought in to translate for Cinque, it’s a moving and empowering moment. For those of us who care to know, we’re finally going to hear the whole story.

The more distance I have from Amistad the more theoretically fascinating Spielberg’s decisions become. It’s only when I revisit the film, which I’ve twice done in recent years, that I’m reminded of how unbearably long, ham-handed, and Matthew McConaughey–filled it is. Especially in its cluttered courtroom scenes, the film slips fatally into historical diorama territory. The historical era it most successfully evokes isn’t abolitionist-era America, but rather mid-1990s Hollywood. As if to excite our impatient and shallow selves with bright shiny objects, Spielberg’s casting strategy seems to have been to contract as many recent Oscar nominees as possible, regardless of physical, facial, or dialectic suitability. Europeans Pete Postlethwaite and Stellan Skarsgård marble-mouth their way through American parts, and not one but two U.S. presidents are portrayed by Brits—Nigel Hawthorne and Anthony Hopkins (and hey, isn’t that Mr. Saturday Night’s David Paymer as the Secretary of State? And little Anna Paquin as the Queen of Spain? Surely they could have found spots for Hanks, Cage, or Jennifer Tilly). Hopkins’s typically strong turn as John Quincy Adams (save for a distracting mound of old-man makeup) actually serves to tip attention even further away from Cinque and the slaves. It’s one thing to acknowledge Adams’s role in the freeing of the Africans, it’s quite another to shoot the man as if he were posing for Mount Rushmore, and pillow his every word of dialogue with a stirring, sanctifying patriotic score. Some have to live down homicide, wait around for translation, and receive the blessing of Morgan Freeman to become heroes; others, it seems, are just born that way. —EH