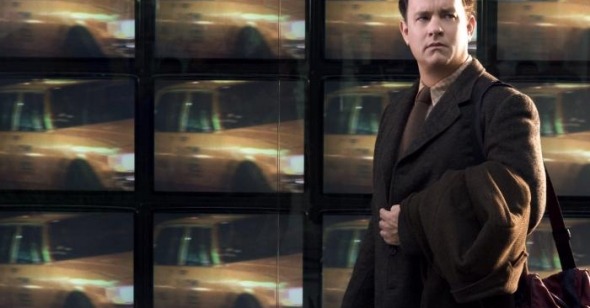 The opening scenes of The Terminal sent a shiver up this viewer’s spine. Two decades ago, as a boy of 13, I wended my way through lines at JFK airport, much like the ones that open the movie. I was a newly arrived immigrant with movie-made images of my new home. Spielberg was a name I knew—we all did. To us, it represented American optimism, proficiency, plenitude. Elliott’s neighborhood in E.T. was nothing new to the American viewer; to a boy growing up in the suburbs of Manila, that—and not any planet Spielberg could conjure—was the land of wonder. Not all of Spielberg’s seventies and eighties movies were set in America, but they all came to define it for us. America was where magical things like these movies can happen.

What is America? How does the world see it? Spielberg has been maligned in some quarters for how he has tackled—or failed to tackle—those questions. Escapism at its most dazzling, his cinema discourages introspection and community, upholds order and patriarchy, is Reaganism’s screen analogue—so the rap goes. But such ideologically overdetermined critiques sell Spielberg short, not to mention conflate optimism with hegemony. A survey of his oeuvre suggests an auteur well aware of the conversations his movies have with each other across the decades. And that’s what excited me most about those opening passages in The Terminal: here was the creator of the America I knew as a foreigner, introducing post–9/11 America as a changed country—a wary, unwelcoming, ugly place.

“America is closed,” says a customs official to an uncomprehending tourist with an invalid passport early in the movie. A sneaky Bush-era zinger smuggled in a scene of comic misunderstanding, the quip could also have been the movie’s tagline—had it stayed true to the mordancy of its scenario. Instead, The Terminal spends the next couple of hours distracting us from the depressing truth it broaches. The movie ends on a vision of America that could exist only in the movies.

And so did Spielberg squander the promise of his first film that went into production after 9/11. Released in the summer of 2004, The Terminal was the rare Spielberg film that was set in the present—and that disappointed critics and audiences alike. (We would have to wait another summer to get the definitive Spielbergian take on that national trauma, War of the Worlds.) Looking back from our vantage, The Terminal seems an even more remarkable misfire: completely tone-deaf, uncharacteristically ham-handed, a dud amid one of the great runs by any modern American filmmaker.

When Viktor Navorski (Tom Hanks), a traveler from the fictitious country of Krakozia, first appears, he is one of a legion of fliers making their way through the winding customs lines at JFK Airport. But while entry into the United States is a formality to most, his visit encounters a snag: as Viktor was en route, Krakozia erupted in civil war and rebels took over the government. Effectively stateless, Viktor is by definition “unacceptable.” The head of security, Frank Dixon (Stanley Tucci), tells him that all will be sorted out in the next day or two, and that Viktor will be free to go on his way to New York.

Except that things are never sorted out. The civil war grinds on; the rest of the world goes on its merry way; Viktor remains in limbo. Unable to enter New York or exit on another flight, Viktor ends up spending nearly a year living in the terminal, piecing together a patchwork existence with the help of the working plebes of JFK. Along the way, he has a near-fling with a beautiful flight attendant (an animatronic Catherine Zeta-Jones, channeling Hanks axiom Meg Ryan), becomes a thorn in Dixon’s side, and emerges as something of a wage-slave folk hero.

Loosely based on the experiences of Mehran Karimi Nasseri, an Iranian refugee who lived in Charles de Gaulle Airport for 18 years, The Terminal engages with reality in other ways—at least on paper. Many saw in 9/11 a repudiation of Francis Fukuyama’s declaration a decade ago that history was at an end; The Terminal takes place in a world in which history has rudely returned. Those visa stamps and indifferent customs officers foreground the reality of post-9/11 travel. The repeated shots of the Department of Homeland Security logo offer piquant reminders of how things have changed. Viktor is history’s victim twice over—by the very real security measures that keep him imprisoned, and by the fictional war that upends his and millions of others Krakozians’ lives.

But having raised some painful facts about America, The Terminal goes ahead and spins a feel-good fable from the material. “I wanted to make something else that could make us smile,” Spielberg told an interviewer around the time of the film’s release. One could excuse Spielberg the sentiment, or go further and interpret the choice as a bold, unfashionable move to dispel 9/11 nihilism with a bit of uplift—a self-conscious attempt to play Sturges’s Sullivan during our time of trauma. But even such a generous reading can’t save the movie. For The Terminal fails on its own circumscribed terms. Irredeemably generic, it radiates screwball geniality—meet-cutes, pratfalls, and misunderstandings abound—but only ends up an emblem of strained frivolousness.

Its failure as an entertainment is perhaps the most surprising thing about the film. Known primarily as a conjurer of spectacle, Spielberg can be underrated as a slapstick maestro. But given a bumbling rube and an entire airport to toy with, Spielberg inexplicably whiffs. An early scene with Frank explaining to Viktor his predicament with an apple and a bag of potato chips as props is out of place and unfunny; a running gag involving wet floors and inattentive walkers seems distinctly uninspired. The simplified bits of business suggest something of a throwback; tropes of silent cinema abound—the movie would have been an apt release in 2011’s season of nostalgia—and Hanks clearly studied Chaplin and Tati for his part (though the end result is closer to Bronson Pinchot). The reconstructed JFK simulacrum, an homage to Tati’s Playtime, seems the ideal setting for mischief, not to mention the kind of constraint that paradoxically liberates. But there’s nothing resembling Tati’s invention here, not to mention Spielberg’s. Putting himself in a box, the director proceeds to think inside it.

Viktor’s predicament mirrors Spielberg’s failure. This is a movie that wants to engage America, but remains stuck in the terminal’s fairy-tale netherworld. The shortcoming is especially frustrating because the glimmers of an autocritique are here. Its opening passages of cordoned lines, omniscient cameras, and businesslike bureaucrats suggest an America different from the one Hollywood presents the world—the America that Spielberg’s oeuvre helped define.

But The Terminal then takes an old-fashioned populist turn. Viktor the little guy becomes tribune of the terminal’s denizens, a pointedly diverse and working-class collective: Among his new friends are an Indian custodian (Wes Anderson regular Kumar Pallana), a black baggage handler (Chi McBride), and a Latino utility man (Diego Luna). It’s something rarely seen in Spielberg’s cinema: a community being imagined into being. But even the political edge of that act is dulled by Spielberg’s insistence on a softer focus. This is a cuddly collection of the marginalized, the American melting pot with all the tensions smoothed out—the 99 percent with a happy face.

Even worse is the movie’s big reveal. The prized possession in this vagabond’s meager luggage is a coffee can, the contents of which are kept from his friends (and from us) until the designated emotional climax. It turns out it contains Art Kane’s famous photo of notable jazz musicians on a Harlem stoop in 1959, along with signed show-ticket stubs from each save one: Benny Golson. The collection was the elder Navorski’s, and the son’s deathbed promise was to get the final signature to complete the set. With a little help from his friends, Viktor finally escapes JFK, cabs it into New York, and completes his mission. The Manhattan he sees is the city at its most charming: snow is falling, the streets are alive, the cabbie is a wry Albanian. Viktor’s last line is “I’m going home,” an echo of Cast Away’s ambiguous crossroads closer. (It wouldn’t surprise us one bit if Viktor stayed in the country that he’s fallen for at first sight.) Those closing passages complete Spielberg’s sabotaging of his own critique: American politics may scare the world off, but American culture will keep them coming back.

As fraudulent as the ending plays, we owe it to Spielberg to entertain the notion that the gentle vibes aren’t what they seem. After all, he has made a specialty of the hollow happy ending. In movies like A.I., Minority Report, and War of the Worlds, totalizing visions of worlds gone wrong were mitigated by the equivalent of slapped-on smiley faces. But there appeared to be a self-awareness in those chasers, a recognition that the feel-good machinations endemic to the studio picture were not up to the task of redemption—even as Hollywood had no choice but to go through the motions anyway. Critics lambasted how unconvincing such endings were without inspecting them more closely. Is there a more brilliantly perverse closer than A.I.’s? Can uplift feel any more transparently tacked-on than in the codas of Minority Report and War of the Worlds?

Alas, it’s a reading that’s a step too far in this instance. The Terminal all but exhausts itself trying to put a smile on your face over the course of two hours. The redemption here is genuine—and all the more false for it. Strong evidence in favor of the prosecution in the ongoing critical trial of Steven Spielberg, The Terminal is guilty of the sins that he has been accused of. That he seems fully aware of the truths it occludes—and one only need glance at the worthier movies clustered on both sides of this one to know that he is—makes the misstep all the more unfortunate.