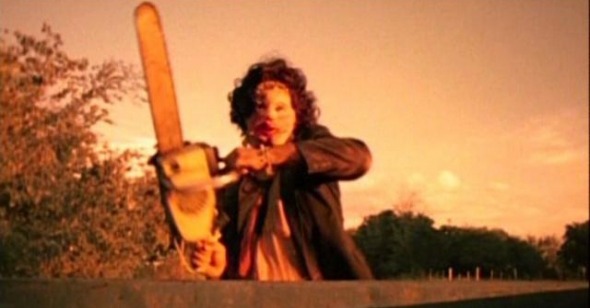 The first scary movie I remember seeing was Poltergeist. I don’t recall if I saw it in a theater (since it was somehow rated PG, I certainly could have), but I know it was one of the first movies I watched on the family VCR. A friend of the family showed up in early 1983 with a single cassette containing three recent hits: Tron, Star Trek II: The Wrath of Khan, and Poltergeist. I fast-forwarded and rewound and slo-moed with fidgety abandon, stretching out the extended-play bootleg-quality dupe until the picture achieved a dim, David Fincher-worthy murkiness. I remember being scared of Poltergeist, but no more than I was of Khan’s mind-mangling ear snails, and I definitely liked it. Though liking things can be complicated when you’re eight years old. The family friend could have given us Missing, and I’d have watched it repeatedly and said I liked it. My brother likes to tell of how visibly traumatized I was by Time Bandits (little people eating rats!), before I proclaimed, on the way to the car, that it was my favorite film of all time. I was also, at the time of Poltergeist, still very much in love with E.T. (with whom—matted, ratty, and stuffed—I still slept). I was keenly aware of Spielberg’s name in the credits and in the newspaper advertisements, which I guess made me a partisan of auteurism about a decade before I encountered the term (and made me partisan in the Spielberg vs. Tobe Hooper debate, oblivious as I was to the name of the film’s actual director).

At that time, I felt very safe and comfortable at home, and even Poltergeist’s domesticity imperilment didn’t screw me up too much. What screwed me up was encountering a low-budget slasher film at a friend’s birthday party sometime later that year. I’ve seen thousands of movies since that day, but few scenes made as strong an impression on me as those glimpses of a Sasquatch-like monster flinging a man in a sleeping bag onto a long pointy branch, and of the same monster ripping the genitals off a man who’d been peeing against a tree. I couldn’t sleep for weeks. E.T. was of no help. I knew then, and I held fast: I was through with horror movies. My memory for images, and the liberties my imagination took with them, was too strong to see such things. I established rules for myself, declined invitations to Halloween parties, and changed the channel when local NY television stations showed—once a week it seemed—mean little drivel like Devil Dog: Hound of Hell.

As an adult I’ve caught up with most of what’s considered essential viewing—horror films that either define, exemplify, or transcend the genre. But since I was never a fan (which is an understatement) I come at these films from a different angle. Interloper maybe, but never dismissive. If I could dismiss horror films then I’d have an easier time watching them. In a sense, since I still can’t watch with ironic or benumbed remove, my fright speaks well of a film’s potency. If it bumps, I jump.

I saw The Texas Chainsaw Massacre the other day. I always knew that I should see it. I’m pretty sure I’d even pretended that I had seen it at various points. But rather than The Exorcist or The Shining or Psycho or even Halloween, I knew, I just knew that it was in another league. As a kid, the suggestiveness of the title and of the video box art placed The Texas Chainsaw Massacre second to only Faces of Death in the list of movies I could never, ever watch. Well, I’m 31 now, and though intense images still stay with me and keep me from sleep, it’s time to face the film. Besides, it can’t possibly be as bad as I’d imagined. Now that I’ve seen and lived to write about it (and have even slept a little in the meantime), I can tell you that it was indeed as bad as I’d imagined. No. Worse. And also really, really good.

Directed by Tobe Hooper, the same cat whose directing credit was buried in the Poltergeist promos, The Texas Chainsaw Massacre arrived in theaters in 1974, which happens to be the year I was born, and more importantly was the year that Richard Nixon resigned from the presidency. Actually funded with money earned from 1972’s surprise blockbuster Deep Throat (which, coincidentally enough, happened to supply a nickname for the source that helped bring down Nixon’s presidency), Texas Chainsaw is unimaginable without its crude, low-budget forebears. Political and historical context is relevant (Vietnam, the Manson Murders, hippie culture, etc.), but not as crucial to the production and box-office success of Texas Chainsaw as the established popularity of underground films. By which I don’t just mean Russ Meyer, porn, or John Waters. I also mean snuff films. Not long after film enthusiasts wondered if a big movie star like Marlon Brando was having real sex onscreen, a horror movie came around that begged similar questions about the authenticity of depicted violence. The Texas Chainsaw Massacre comes off like a home movie gone fatally awry.

Aside from the masterful opening shots—which flash the film to life with hints of decomposed flesh—the film initially comes off as an atonal mess, a poorly acted, amateurishly shot exercise in nastiness. Five young Texans pile into a van to find an old abandoned house, picking up a crazed hitchhiker and running low on gas before parking for good. There are telegraphed moments of foreboding, clumsy line readings in the service of thematic foregrounding, and predictable lunacy. Dialogue is hard to decipher —and dreadful when audible—and the characters are flat and unappealing. This continues for 34 minutes. But rather than lose my attention, this apparent time mismanagement lulled me into thinking I was safe, even as the good-looking guy, Kirk (William Vail), and the good-looking gal, Pam (Teri McMinn), tease us with dooming talk of skinny dipping at the swimming hole. Instead of taking that swim, they approach a house behind the old house (the old house is merely a decoy) in hopes of obtaining gas. After so many unremarkable frames, Hooper finally gets our attention with a gorgeous ground level upshot tracking Kirk’s walk to the door of the house; body, tree, and house move against the looming, stationary sky. Soon Kirk enters the house—trespassing, it should be noted—and trips on the way to an interior doorway. Before he or we know what we’re seeing, a hulking man appears and hammers him on the head. Kirk convulses like a stricken animal, the man drags him to the interior doorway, and they disappear behind a metal door that slides closed like a falling guillotine. Unmoved during the attack, the camera still peers in from the doorway as if it knows better than to follow. Until curiosity and utter stupidity get the better of us.

Over the next 15 minutes two more people are brutally felled—both as guilty as Kirk of entering a strange house uninvited, and these times the camera follows. For which we all pay. With a swiftness to match the immobilizing blows, the camera brings the house’s interior—as well as the chainsaw-toting assailant, Leatherface—into disorienting, reverse-zoom view. What’s shown doesn’t lessen the mind’s burden of suggestion, as the details are even worse than could be imagined: meat hooks, body-sized freezers, rusty tools, a buzzing saw, and Leatherface’s ghoulish mask of patchworked human skin. We don’t see hooks piercing flesh, we don’t see dismemberment, we don’t see Leatherface peeling himself a new mask—in 15 minutes there’s only time enough to conjure such lovely thoughts in our heads. Thanks to Hooper and Wayne Bell’s masterful sound design, the conjuring cues aren’t just visual. Sliding between sound/picture synchronicity (hammered head crunches) and disconnected cacophony (pig squeals and clanging steel), the film offers no respite for those too scared to look.

After a fourth person is dispatched (Paul A. Partain’s wheelchair-bound Franklin is the only character impaled by chainsaw), only the benippled lass, Sally (Marilyn Burns), remains. Outside of a brief, gratifyingly contrapuntal family freak show, what follows are 30 minutes of hyperventilating chase. Sally gets bloodied, Sally gets hammered, Sally jumps from windows, and Sally screams. How much can she take? Hooper pushes her, and us, to the very edge of will; survival begins to seem not worth the cost.

The Texas Chainsaw Massacre reveals—and I can’t believe I’m saying this—how satisfying cinematic death is. It reveals this indirectly, because death hardly occurs in the film. What occurs is death suspended, death delayed, which is frustratingly, terrifyingly unsatisfying. Most slasher films fetishize shots of piercings or beheadings or obliteratings that describe a gory, though instant, end. With the conclusion of each death, another sequence begins in which another live person heads towards an end, and on from there. The intensity lies in the intense imagery, which is immediate and, leavened as it is by the narrative’s renewal, oddly satisfying. No such solace in Texas Chainsaw Massacre. Justifiably praised for suggesting more than it shows, the nature of its suggestion is far more horrifying than I’d imagined. For death isn’t what’s truly horrifying here; after all, the blankness of death stalls the imagination; what’s truly horrifying is torture. Prolonged, agonizing, unthinkable torture. This is what Texas Chainsaw masterfully conjures in the mind. A head blow here, a head blow there, a meat hook and an asphyxiating body in a freezer, cue chainsaw buzz and pig snorts—and suddenly I’m imagining myself in each scenario, all at once, desperate for the release of death. Just get it over with. But nothing in The Texas Chainsaw Massacre is gotten over with—and nothing it shows or suggests can be gotten over. It leaves you, like the girl on the meat hook, hanging there in terror.

Texas Chainsaw doesn’t create these preoccupations, it draws on pre-existing fears and pushes them to elaborate, medieval extremes. The film locates the spot in your brain that fears unfathomable pain and never-ending torture, and presses hard. Praise to Hooper (et al) for finding that spot, and for pressing so masterfully. In my memory, only The Blair Witch Project can rival The Texas Chainsaw Massacre in its exploitation of such primal fears. And my memory—still clinging to visions of cheaply costumed killer Sasquatches—won’t let any of it go anytime soon. Which commands a healthy measure of respect, perhaps even awe. But not, if I may draw the line somewhere, gratitude.