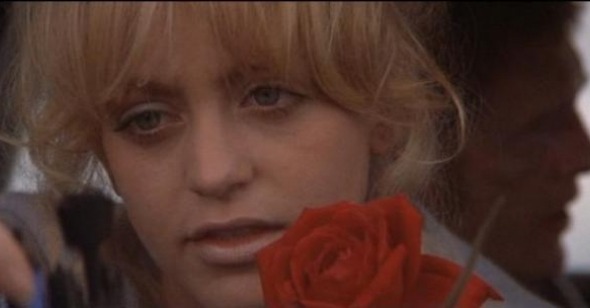 The Runaround
Michael Koresky on The Sugarland Express

After half a decade working in television, Steven Spielberg finally had his theatrical breakout in 1974; but it was hardly a breakthrough. The Sugarland Express (1974) was not what one could call a hot property: its script, with the working title Carte Blanche, had already been put in turnaround at Universal years earlier. Loosely based on the tragic true story of Bobby Dent and Ila Faye, it concerned two young, married Texans who kidnap a sheriff en route to reclaiming their baby from a foster home, and in the process become media sensations. It doesn’t end happily, and Universal exec Lew Wasserman wasn’t particularly interested in such a “downer;” five years after Easy Rider, Wasserman shared the sentiments of a beleaguered studio system, believing that the anarchic youth movie was over. It was only when producers Richard D. Zanuck and David Brown (who had started their own production company after the former was fired from Twentieth Century Fox by his own father, Darryl) went to bat for the script—which Spielberg had developed with Matthew Robbins and Hal Barwood— that Universal bit.

Spielberg’s Duel (1971) had broken out of the TV ghetto and been released theatrically in Europe, but the director was still considered largely untested. With its multiple traffic pileups and extended auto chases, The Sugarland Express would give Spielberg a larger sandbox in which to play with toy cars. But in casting a wider net both conceptually and narratively, the director went smaller, and in so doing missed out on that mythic grandeur that typified both Duel and his next film, Jaws (1975). The Sugarland Express was and remains uncomfortably wedged in between those lean-and-mean, stripped-down fables: in the former it’s a truck, the latter a shark, but they’re essentially similar tales of domesticated man battling the elements in unforgiving wide-open landscape—each is a big, growling machine of a movie. In Sugarland, on the other hand, the main character is female (he wouldn’t have another until 1985’s The Color Purple, and arguably none after that), character identification is not black and white (its heroes are also its villains), and viewers are not led to feel one way or another about the story’s possible outcome. In Duel and Jaws, our desires are clearly aligned with their respective protagonists: simply put, that truck/shark must die. Here, though, the single-minded pursuit of troubled married couple Lou Jean (Goldie Hawn) and Clovis Poplin (William Atherton) is dubious to say the least: she has broken him out of prison so that they can “rescue” precious Baby Langston, whom the state has snatched away and given to a foster family. To do so, they have taken as a hostage affable patrolman Maxwell Slide (Michael Sacks), using his cop car as a getaway mobile, and as a result they have attracted seemingly the entire Texas police patrol, including seen-it-all Captain Harlin Tanner (played by seen-it-all former rodeo cowboy turned Oscar winner Ben Johnson).

Their plan, rather vaguely sketched, leaves them clearly headed for disaster, and our sympathies are only barely roused throughout: even as a portrait of maternal instinct, the film is curiously dispassionate (which might come as a surprise to some in retrospect, since Spielberg would become so fixated on tales revolving around the restoration of the family unit). The reason for this might be the distinct judgment the film makes on the Poplins, especially Lou Jean. Clovis, as played by redheaded, wan Atherton, is neutered from the outset, reliant on his wife to break him out of jail, and shaky and fumbling with guns; she, on the other hand, is in control, even if her confidence comes from an unpromising mix of manipulation and a corrosive idiocy. Though Hawn invests Lou Jean with her customary spriteliness, her vivid comic stylings (famously marked by eyelash-whipping flirtatiousness and a Tinkerbell-ish sexual directness) are here made pathetic. A general air of pageantry hangs over the film, perhaps an unintentional side effect of a Cincinnati-born, California-raised director overseeing a cast of Yankees doing their best Texan drawls: Hawn is from D.C., Atherton from Connecticut, and Sacks from New York; only Ben Johnson, predictably, emerges unscathed, his very presence supplying the sort of iconicity the rest of Sugarland lacks. Johnson remains outside of the film: his half-admiring, mostly patronizing line, “Ah, shoot, they’re nothin’ but a couple of kids” while watching Lou Jean trying to scamper to a port-a-potty does little to further endear us to their plight.

Spielberg’s wavering tone and slippery handle on the material—at least when he’s not focusing on squad cars crashing into each other like matchbox vehicles—is traceable to a basic authorial confusion. In a 1974 interview, Spielberg said, “To me, the real villain’s Hawn; she’s the heavy for me—I mean, I intended it to be that way. But everybody has a different interpretation of who their villains are and who their heroes are.” This desire to leave it open-ended, while admitting that he very clearly took sides in the conception and making of the film reveals its inherent schizophrenia. In that same interview, Spielberg reveals that just six months later he wishes he had shot the film differently, “just like a documentary . . . in 35mm handheld” and “it would have been from Ben Johnson’s point of view.” Such a dramatic shift in Spielberg’s thinking so soon after the film’s completion is indicative of a project without direction, and is reflected in Universal’s bewilderment in marketing it (the studio tried 28 different campaigns).

Sugarland’s troubling lack of perspective could also point to a certain political naiveté on the part of the then 27-year-old filmmaker. By grafting an old-fashioned cops-and-robbers framework and aesthetic (when guns are fired in this film, they have the zingy, high-pitched reverberation of something out of an old western) onto a true tale of two tragic welfare cases taking the authorities for a ride, he ends up trivializing their plight. This would be more acceptable if the film were intended as a completely negligible entertainment, but young Spielberg called it “highly political,” as “a terrible indictment of the media.” He even later likened it to Billy Wilder’s Ace in the Hole in its portrait of the media as a circus; yet the Texans who amass to show their support for Lou Jean and Clovis, whom they wish to ascend to the level of folk heroes, are a far cry from the opportunists and charlatans who arrive on the site of Leo Minosa’s cave entrapment in Wilder’s more sophisticated, and far more cynical, film. Spielberg is so insistent that they not become sound icons that they end up seeming like supporting characters in their own narrative; one reason that the two other concurrent “romantic outlaw” films of the same period, Terrence Malick’s Badlands and Robert Altman’s Thieves Like Us, are so much more effective is that their filmmakers allow their protagonists to assume a mythic power, the dilution of which then instills them with a certain poetry.

As evidenced by the film’s most famous sequence, Spielberg ultimately seeks to liken his characters to Looney Tunes figures: Clovis and Lou Jean are holed up in an RV next to a drive-in movie theater, and Clovis watches and appears to identify with a violent Coyote vs. Road Runner cartoon (Chuck Jones’s Beep, Beep) reflected in the window. It makes sense, then, that it’s the colors surrounding them that seem to matter most: the gorgeously faded sunspots and yellow and violet glares on Vilmos Zsigmond’s lenses; perfect azure skies stretched out over dusty highways; the flashing crystal blues and candy-apple reds of the endless parades of cop cars, dotting the landscape like Christmas lights. There’s enough unquestionable visual panache here that it encouraged Pauline Kael to write in 1974, “He could be that rarity among directors—a born entertainer—perhaps a new generation’s Howard Hawks. In terms of the pleasure that technical assurance gives and audience, this film is one of the most phenomenal debut films in the history of movies.” Regardless of how she continued to feel about Spielberg (she did not afford him the coveted can-do-no-wrong auteurist mantle of, say, De Palma), her prescience here is striking, at least in terms of zeroing in on Spielberg’s uniquely fine-tuned physicality. But what she and others couldn’t have predicted from the ideologically schizophrenic Sugarland Express is that Spielberg would end up wielding that craftsmanship to create images of such majesty, to overwhelm viewers, and to leave all other Hollywood comers cowering in the corner.

While one would like to embrace Sugarland for what seems like modesty (at least in comparison to the grandiosity of his upcoming fish tale, and seemingly every movie after it), its aimless folksiness doesn’t become its director. There would never be another Spielberg movie that feels less dreamlike—which rouses us with images that seem ripped from an unconscious we didn’t know we had lying in wait; even bête noires like 1941, Jurassic Park: The Lost World, and The Terminal occasionally frighten and exhilarate. And contrary to popular belief, its noncommittal attitude to family (the film remains oddly uninvested in reuniting Lou Jean and Baby Langston, even as it careers toward its violent conclusion) is not all that unprecedented in Spielberg’s oeuvre: in Close Encounters of the Third Kind, family man Roy Neary never looks back at the kids and the mother of his children before boarding the mother ship; in A.I. Artificial Intelligence, a young boy (robot or not) spends his entire sad existence trying to reclaim the mother who clearly never wanted him. But it is the only Spielberg film that feels genuinely judgmental: it’s a film about failure that blames its own characters for that failure. Perhaps that contributes to the film’s overall failure as well. Conversely, critics would soon start judging Spielberg on his success, which might help explain the perverse affection many feel for The Sugarland Express.