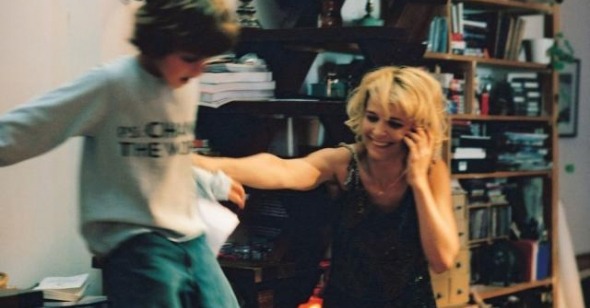 We Float
By Michael Koresky

Albert Lamorisse’s red balloon is still perfectly, lollipop round in Hou Hsiao-hsien’s Flight of the Red Balloon, a tribute to (and glorious expansion of) that 1956 children’s classic. Its unassailable roundness isn’t unimportant when discussing Hou’s film, as the sort of visual beauty this director is after has never necessarily been of the symmetrical kind. Instead, Hou revels in complex set-ups that honor the people within them by doting on their movements, mannerisms, withholdings, and revelations. The peripheral presence of the balloon stands in sharp contrast to this film’s gorgeously maintained mess: never has a film felt so spontaneous, slapdash, and utterly controlled all at once. It’s become a cliché to say that a film floats, that it exists in reverie, yet Flight of the Red Balloon may come closer to embodying an earthbound heavenly state than any film I’ve seen. Its casual bliss is buoyed by a regard for beauty so accessible that, in its self-reflexive final scene, even a group of schoolchildren can notice it.

A remarkably rich, rewarding, and restful experience, Hou’s latest is a film like no other—in the simplicity of its lines, colors, and framing, and in the complexity of how those elements compound and contextualize its emotional subject matter, Flight of the Red Balloon can, in my mind, be compared to the works of Matisse. Despite this elevation, the film, miraculously, doesn’t feel like an artist’s grand summation, but rather just another in a long line of purely wrought canvases; it never calls attention to its own technique or turns its endless flow of lovely, complicated compositions into recognizable set pieces, and instead allows its three principal characters to navigate its spaces with ease. The very elements that many feared might have tripped Hou Hsaio-hsien up (being out of his country and native language) here become strengths: a trust in his actors to inhabit their own, distinct daily lives without strict authorial pressure, and a view of Paris that’s just outsider-ish enough to be slightly awed but aestheticized enough to not become travelogue. Also, Hou’s feelings for the original Lamorisse film feel more like the warm regards of a distant admirer than the impassioned homage to a hallowed national treasure.

Of course, the larger question is how that admiration for The Red Balloon plays out in the film, and more importantly, how central that ultimately is to its narrative. Though Flight begins and ends with images of the balloon as it graces the air above and surrounding Paris, its presence within the film is minimal, measured, and reserved for distinct, unassumingly emphatic moments. So mercurial is the balloon (where for Lamorisse it was a character, given to fits of relatable emotions, for Hou it’s something more enigmatic, less concrete, and wholly sympathetic) that its absence becomes one of the film’s structuring forces. Often we’re scanning the horizon for it, wondering from which corner of the frame it will merrily bounce in—and when it doesn’t we begin to wonder why.

But even as he has us gazing at open spaces with hope, Hou more often situates us squarely within the clacking din of the stuffed city apartment belonging to divorced, working single-mom Suzanne (Juliette Binoche) and cohabited by her young son, Simon (Simon Iteanu), and their new nanny, Song (Fang Song). Brimming with the gorgeous, harried mundanities of daily living, the apartment is the film’s true nexus, an interior whose walls the balloon will never penetrate and whose essential goodness is as strung up with its emotional messes. And when was the last time a director so reveled in mess? Suzanne’s ungainly shoulder bags and frumped layers of clothing aren’t merely accoutrements but the jewelry of frazzled contemporary life, and Binoche wears it all like a second skin. Introduced enacting multiple voices for a live children’s puppet show and adorned with a wonderfully unkempt mass of horribly dyed-blonde hair, Binoche has never been like this onscreen; with Kieslowski and Malle she’s been porcelain and morose, with Haneke intense but mostly reactive. Here, Binoche is a flibbertigibbet, unpredictable, given to fits and starts of frustration towards the clutter of her life (especially regarding her unwanted tenant Marc, a friend of her distant boyfriend who’s been slack on paying rent) and intense adoration for her son. As in Caché, she’s surrounded by shelves of books, but this time they’re lovingly mismatched and tossed about, the belongings of a dedicated treasurer rather than the calcified status symbols of a thoughtless collector. She proudly wears sparkly, lumpy dresses over jeans and red track-suit jackets next to clashing leopard-print shirts, and Hou films her with admiration, never condescension.

Binoche is a force, and Hou manages to integrate her so well into his bustling compositions that she never seems incongruous or too much. Despite this stunning (let’s face it) star turn, The Flight of the Red Balloon remains a story of childhood, not with bullies to overcome and rites of passage to traverse, but with the fleetingly beautiful moments caught in a haze of everyday routine. Of mint cordials and grenadine juice. Of jukeboxes and pinball. Of Gameboy and piano lessons. Without putting a halo on innocence, Hou manages to invest Simon’s activities with “magic,” a notion that’s been overdeployed and underrepresented convincingly in other films about youth. Often left alone with Song, or his piano teacher or babysitter, Simon inhabits his own secret world—so secret that not even Hou would dare enter it. At one point, while Simon wields Song’s digital palmcorder, the red balloon hovers patiently outside the apartment window; we assume he sees it along with us, as he raises the camera in its direction. Neither Song nor Suzanne see it, and barely do we, as Hou is so busily focused on so many other elements in the frame. Thus, whether the balloon even exists remains an enigma, albeit one not forced on the audience. In an early scene, Song, a previous film student in Beijing, tells Simon about Lamorisse’s film, and that she means to create a video homage to it. Hou doesn’t make this a narrative thrust, instead eliding the film-within-the-film almost completely, letting its assumed creation imbue the environment.

Without the calming reassurance of the balloon, Simon’s world might seem overly hectic, as affected as it is by Suzanne’s whirlwind. If flattened out into an American narrative, this might have been played as a far more accusatory portrait of a working mother who must reconnect with her son. As is, the film recognizes the urgency of Suzanne’s commotion, tacitly asking if and when she’s happy, what brings her anxiety and fear, and how she reconciles that with the genuine love for her little boy.

All of these seemingly disparate emotions and addresses are often composed together in one frame, never more quietly dazzling than in a late long take that begins with Song inviting into the apartment a blind piano tuner. As he recalibrates the instrument on which Simon takes his weekly lessons, the camera drifts to the boy, playing video games before taking a phone call from his eternally absent half-sister, who lives far away with their father (we’re not quite sure where, but to a child it’s a distance as great as the moon’s). Finally, beleaguered Suzanne storms in, reeling in anger at the persistence of her tenant. Flurry and flutter, but never catastrophe—Flight of the Red Balloon is simple to describe, but its effect is difficult to relate, and sequences like these impress not merely with technical triumph (though surely they are triumphs) but with the simultaneous awe and understanding they evince for the everyday.

In fact, there’s so much blissful imagery in Hou’s film that it all rightly becomes mundane, vaporous. Nearly every scene set inside the apartment is shot from the same angle, so that within the frame we get the doorway, dining table, and a sliver of a kitchen. It’s a classic Hou set-up, yet containing an almost Olivier Assayas–like hustle bustle; and the subtle gradations within the shot depend on the time of day, and how the sunlight changes the mood of the room (at one point, while Song and Simon make crepes, the evening has emphasized the yellow light cast on the table and the blue glow of the kitchen in the background, with the scarlet window curtain providing a blushing left-hand border). So becalmed do we feel inside the frenzy of this apartment, that when the balloon makes a climactic reappearance, hovering benevolently outside a dirt-frosted skylight above a sleeping Simon, it begins to feel as though a natural extension of, rather than a counterpoint to, the lives of the characters. If for Lamorisse the red balloon was a stand-in for an absent friend, for Hou it’s something closer to a guardian angel. It’s hard to imagine that it won’t always be there.