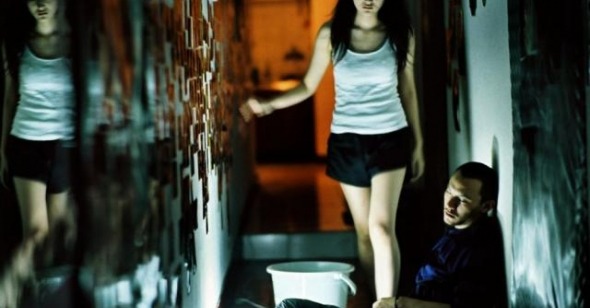 I worried that I might have to surrender my cinephile credentials if I confessed that I’ve never much cared—nor, I’m quite certain, shall I ever care more—for the films of Hou Hsiao-hsien, but the confession is necessary: neither for provocation nor repentance, but simply because anything I have to say about his latest, Three Times, will be spurred by that knee-jerk. It’s a handicap as much as a boon for critics that we inevitably filter our private, unmediated pleasures and biases into the public, structured forum of words and reasoning, of justification. This is not to say that those immediate sensations are any more “genuine” than their eventual articulation. In my case, initially quite negative gut responses to films as diverse as Fata Morgana, The Last Movie, and Twentynine Palms crystallized into great admiration once filtered through the ol’ cortex, when their respectively soporific, laugh-inducing, and shamelessly shocking effects had been disassociated from mere sensation into an understanding of how and why they were inducing those effects.

For Hou, however, the gut has refused to yield any ground. No matter that I acknowledge his films’ beauty (the highest form of beauty, that which issues from a way of seeing), their reconceptions of cinematic (and extra-cinematic) time and space, their engagement with the shaping hand of history and its effects upon the present, nothing changes the fact that they leave me almost completely unmoved, emotionally or intellectually. There are moments, of course—the coincidence of four trains in Café Lumière, the Dear John letter in Dust in the Wind, the final breakdown on the phone in Good Men, Good Women—as well as admiration for certain films’ overall historical/aesthetic projects (City of Sadness and Good Men, Good Women). But for this viewer, these are no more than slight gradations on an otherwise flat plain, and while their microscopic delicacy is certainly evident of Hou’s craftsmanship, they seem quite out of proportion to the almost unanimous proclamations of mastery. Oh well I’m sure there are many who wouldn’t share my rapture at the sound of a phone charger hitting the floor at the beginning of the Dardennes’ L’Enfant.

So Three Times: three eras (1966, 1911 and 2005), two actors (Shu Qi of Hou’s Millennium Mambo and—lest we forget—The Transporter, and Edward Yang, Wong Kar-wai and Ang Lee veteran Chang Chen) playing out three different love affairs in one troubled country. The opener, “A Time for Love,” takes place in a series of provincial pool halls, as a young man recently called up for military service meets (briefly) and pursues (extendedly) a hostess with whom he spent one friendly, sexless night. A delightful surprise, for these eyes at least: the first Hou film (or part of a film) that I’ve actually enjoyed, the habitual opacity of character and distended pacing perfectly suiting the utter arbitrariness—and thus the monumental importance—of the fragile bond between these drifting, wholly recognizable people. The Platters’ “Smoke Gets In Your Eyes” and Aphrodite’s Child’s “Rain and Tears” on the soundtrack, a shared umbrella in the rain, an achingly tentative grasping of hands while awaiting the bus that will separate them again, and forever—it’s all lovely.

“A Time for Freedom,” its dialogue conveyed in silent film intertitles, shifts to Flowers of Shanghai territory, a brothel where a dissident intellectual seeking Taiwan’s liberation from the Japanese romances a prostitute whose own inescapable social entrapment hovers unspoken within their guarded, and ultimately impossible love. Lovely as well, especially with that lonely piano accompaniment, but the drag has begun to set in. “A Time for Youth” heads to the modern day, as Qi’s epileptic, drugged-up pop singer ricochets disinterestedly back and forth between male and female lovers. Millennium Mambo redux, and thus the most tiresome of the lot. While I’m retrospectively developing an appreciation for Hou’s remarkably tactile evocations of nightclub space and atmosphere, I’ve never been able to work up much empathy or interest for his disaffected Beautiful Young Moderns, and this Time is no exception. Like the majority of his work, Hou’s latest slips past my eyes leaving nary a trace of its passing, the slight changes in method that do register—the attentiveness to performance, rather than mere existence, which Hou directs to Qi and Chen (excellent throughout), and a correspondent loosening of Hou’s habitually distant camera to follow the movements of his actors no more warranting extravagant praise than haughty dismissal.

Yet is it possible for a critic to express his disinterestedness in a major filmmaker and not enter into polemics? Can we simply state that these films do not affect us without either impugning a talented artist or goading his supporters into indignant defense? Doesn’t that “gut response” —with which I feebly cloaked my quite definite position in the guise of a natural, involuntary reaction—have nothing natural or involuntary about it; isn’t it, rather, a construction of thought, a definition of art’s abilities and boundaries, and thus a judgment upon the artistic worthiness of artist and artwork? Frankly—and here I escape again—I’d rather not think about it too much. I have too much respect for Hou, or rather for what others have been able to make of him, to carry his inessentialness to my own cinema cosmogony too far into the public arena. Criticism can’t help but be combative, but I’d rather pick my fights somewhere else.