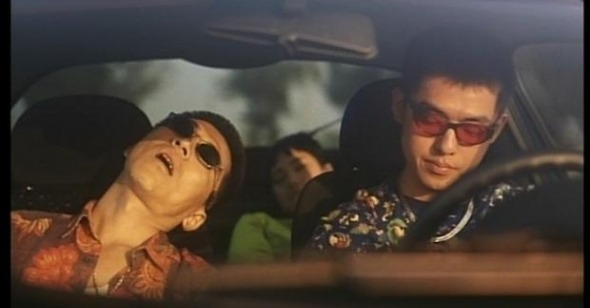 Even the title is unerring. Goodbye South, Goodbye: the phrase evokes a new beginning, the promise of motion, a regretful departure, an elegiac wallow, and sweet release, all at once. That density of suggestion pulsates in nearly every scene of Hou Hsiao-hsien’s movie. The most lapidary of filmmakers, Hou gets his effects without calling attention to himself. Light plays across surfaces, the camera glides through space, the frame traps its inhabitants, every choice articulating meaning and feeling. Without affectation, without visible effort, he transforms a staple of pulp fiction—the gangster trying to go straight—into a melancholy meditation on time, place, subjectivity, and Taiwan.

Released in 1997, Goodbye South, Goodbye came in the middle of a run that elevated Hou to the exalted status he enjoys today. City of Sadness might be my personal favorite, The Puppetmaster probably his greatest, Flowers of Shanghai his most audacious. Stacked up against those peerless achievements, a near-masterpiece like Goodbye South, Goodbye almost suffers. Indeed, the movie did not receive nearly as much love from critics as his other work (Hoberman called it “misappreciated”) and, according to Kent Jones, prompted something of a backlash against “difficult” cinema. There’s no point in denying its downsides. One of his more languorous movies, Goodbye South, Goodbye is almost too successful in conveying the stagnated, going-nowhere lives of layabouts. Like all Hou movies, Goodbye South, Goodbye is uninflected and detached, demands active engagement, perhaps more so than most of his other films. (It’s probably the most uneventful movie about gangsters ever.) Like all of Hou’s works, it is also rich, lustrous, profound, and affecting. Only the blind and unfeeling would find it a slog.

The lives of low-level gangsters never looked so low. When we first see him, Gao (Hou regular Jack Kao) cuts an intriguing figure, with his dark sunglasses, cell phone in his ear, and the air of a dealmaker. But the veneer cracks immediately: he loses the cell phone reception, and the call ends with Gao shouting into the phone and straining to hear the other end. Gao’s entourage further deflates the imagery. His younger brother Flat Head (Lim Goong) is an indolent screw-up with a short fuse, Johnny Boy to Gao’s Charlie. Flat Head’s girlfriend, Pretzel (Anne Shizuka Inoh), is no better, an immature wastrel who doesn’t even have the good manners to shut the bathroom door while peeing in full view of Gao. Gao struggles to keep all three afloat with petty scores of varying legality, the most unglamorous of which is a scam involving selling pigs to the government. His dream is touching in its modesty: to open a restaurant-club in Shanghai. It is to Hou’s credit that he gives Gao the gift of self-awareness. Gao may be impressively all business when he’s doing business, but he’s no self-deluded dreamer. In a weak moment, he breaks down in tears, wailing that he has failed his father. All too aware of the distance between his aspirations and his hamster-wheel reality, and the costs of carrying volatile, useless Flat Head with him (he’s all but preordained to bring Gao to ruin), he emerges as one of Hou’s most poignant creations, a stoic searcher stuck in a rut.

Goodbye South, Goodbye alternates between stasis and movement. Much of the movie is given over to the dead time that takes up large swatches of the petty-gangsta life. The movie deposits us into scenes with little exposition. We observe the rituals and habits of this pathetic demimonde – illicit card games, a riot of reaching hands and clamorous chatter at dinner tables, the crushing boredom in cramped rooms. (Kent Jones has said of the movie, “Is there another film with a better sense of just hanging out?”) Hou’s long takes are a wonder of cinema; those medium shots from a single point of view, hovering, observing with a sad eye, encompass so much. In Goodbye South, Goodbye, they convey what the director Jia Zhangke, himself a Hou disciple, calls “that sense of deadlock.” You feel keenly the passage of minutes, the weight of life as it presses down.

Perhaps Hou’s most inert narrative, Goodbye South, Goodbye paradoxically features some of his greatest tracking shots. There are shots of car rides through crowded city streets, idylls on lush country roads, trains snaking into the mountains. These moments are invariably gorgeous, graceful, swoony—they’re as beautiful as anything Hou has committed to film. The most transfixing is a motorcycle jaunt in the countryside, a lovely, wending tour through rural, overgrown Taiwan. Bid goodbye to this? Fusing contentment and melancholy effortlessly, the moment feels like an act of consolation from Hou to Gao, a whiff of transcendence for the earthbound.

Underscoring the generosity of his uninflected vision, the movie also cannily reminds us of the multifariousness of human experience. Throughout Goodbye South, Goodbye are unexpected cuts to strange angles and puzzling perspectives. In one, there is a close up of snowglobe, with a man’s tattoos in the blurry background beyond it. In another, the camera tracks into a restaurant dining room, except everything is in an orange tint and the soundtrack is silent. Each time, Hou pulls back, revealing that those images were seen through someone’s eyes—in the former, Gao’s girlfriend dawdling in bed, in the latter, Flat Head dishing out orders while wearing orange sunglasses and a walkman. Tempering the detachment of his medium shot, such images awaken us to the presence of other subjectivities. Hou makes us see through the eyes of others—the essence of empathy, and of art.

Goodbye South, Goodbye was the first present-day-set film Hou made since Daughter of the Nile, nine years earlier. (Good Men, Good Women, made before Goodbye South, Goodbye, partly took place in the past.) In two movies since then—Millennium Mambo and Three Times—Hou has cast a sad-eyed gaze upon modern Taiwan. In all of them, Taiwanese youth are depicted as listless wastrels, addicted to distraction and unmoored from their past. His long takes don’t capture time spent so much as time squandered. Frankly, by Three Times, the critique had suffered from the law of diminishing returns: although he was never hectoring, he seemed to be harping on the same point about the dismal present without adding anything new. Perhaps Hou sensed this as well. Two of his most recent movies, Café Lumiere and Flight of the Red Balloon, are both contemporary as well, but take place in Japan and France respectively. The change of scenery has added a new dimension to Hou’s commentary on modernity. These new films are light as a feather, even as the same themes of solipsism and atomization connect them to his modern-day Taiwan movies. In retrospect, Goodbye South, Goodbye is the bleakest of them. In Millennium Mambo, Hou ends his gentle reproach of wasted youth with a snowy reverie, and the hope that still to come is the consolation only time can grant: wisdom. No such luck for Gao and Flat Head. Goodbye South, Goodbye, a movie predicated on the forward motion of motorbikes, cars, and trains, ends in a ditch on the side of the road in the middle of nowhere.

As with every one of his films, Goodbye South, Goodbye ends up being an understated showcase for Hou’s sophisticated storytelling. How good is Hou? Near the end of the movie, there is a shot of Gao in his car going through a car wash. Over the soundtrack, we hear Flat Head on the phone, at work on a plot to strike back against a cousin who also happens to be a policeman. The car continues to move forward, no hands on the wheel, Gao sitting passively as the plan that will spell his doom is set in motion, his fate sealed and expressed in one naturalistic, breathtaking image.

For Hou, pounding modern music, be it industrial, techno, or rock, has become shorthand for his critique of the present. Pop songs comment on the action. Near the end of Goodbye South, Goodbye, a man on a karaoke machine sings, “Lots of love, lots of hate/ A world of desire.” Anticipating Flight of the Red Balloon’s valedictory homily—“a bit happy and a bit sad”—the lyric sums up Hou’s cinema. Resigned but not reproachful, comprehending and never coercive, his gaze redeems the mundane into something approaching the numinous. Geoffrey O’Brien once wrote that the movies made “time itself old-fashioned.” Hou reconsecrates time, and in the process reanimates human experience as rendered by the movies.