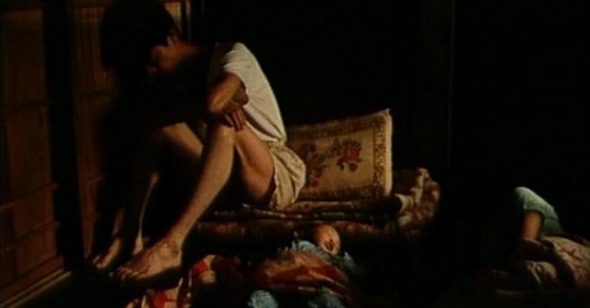 Hou Hsiao-hsien’s eponymous episode in the omnibus film The Sandwich Man (more literally translated from the Chinese as His Son’s Big Doll) begins with an image that can be interpreted as absurd, even slightly surreal, before it reveals itself as tragic. Sticking out like a cartoon character in a live-action film, protagonist Jinshu lumbers through the humid streets of small-town Taiwan, buried in clown make-up and a multi-colored wig. An opening title establishes him and his story as representative of a particular historical moment: the year is 1962, and the setting is identified by the politically contentious name “Min Guo,” or “Republic of China.” At first it is difficult to know how we should respond to this grotesquerie—with laughter or revulsion—until we see the man’s face in close-up, a ridiculous red smile painted over his permanently wincing expression. By the time the clown has passed by a food rations line and made his way home to his family, we have already guessed the film, like many others about poverty, will center on the physical and emotional degradation that often accompany male breadwinning.

Widely regarded as the work that ushered in the New Taiwanese Cinema, The Sandwich Man follows the lead of other omnibus films of its era, whose purpose was to give young directors a chance to explore their creativity and address social issues. (Its most prominent forerunner, 1982’s In Our Time, introduced audiences to Edward Yang, the movement’s second most-acclaimed figure.) Each thirty-minute segment illustrates both the traditional Taiwanese family’s economic dependence on the male worker and the daily perils that lay before him. Hou’s hero—markedly lacking the epic trajectory of the men in City of Sadness or The Puppetmaster—earns his pittance as a walking advertisement for a local theater. Ironically named “Money Tree,” he comes home everyday humiliated, barely acknowledged by his increasingly frustrated wife and a son who recognizes him only in costume. Pushing the film one step further into reality, Hou wastes no time beating around the bush, depicting the clown grappling with the issues of birth control and abortion (the latter was legalized two years after the film was made) as he questions his financial ability to raise a child.

Hou manages to end “The Sandwich Man” in a burst of bittersweet optimism, perhaps the last time he would tie a film up so neatly. The two following episodes, Tseng Chuang-hsiang’s “Vicky’s Hat” and Wan Jen’s “The Taste of Apples,” add some satiric bite to the anthology, critiquing Taiwan’s mad rush to embrace and measure up to Japan and the U.S. Unlike Hou’s segment, these films—the second about two men selling dangerous Japanese pressure-cookers in the countryside, the third about the dubious benefits of being run over by an American military car—attempt an unsettling mix of harsh sarcasm and clear-eyed observation, with an uneven control of tone. But one of the virtues of the usually schematic omnibus form is its embrace of limitation—the way a director can build the world in miniature with the assumption that his approach will not be exhaustive or definitive, and then can defer to his fellow filmmakers to fill out his worldview. The tenderness of Hou’s piece opens onto the eeriness of Tseng’s and the dark comedy of Wan’s, leaving us with a portrait of Taiwan in the Sixties that feels more like a series of drafts or sketches than a monolithic, dogmatic history.

At first glance, the three scenarios in The Sandwich Man—with their narrative simplicity and their devotion to the working class—can’t help but bring to mind the Italian neorealists. Hou’s film in particular seems an echo not only of Bicycle Thieves, but also of Chaplin. After watching The Sandwich Man, it is easy to imagine that Hou might have continued to lead Taiwanese art cinema down a path similar to the neorealists, whose combination of truth-telling and melodramatic artifice brought an immediacy to their depictions of the underclass struggling against invisible political forces. Mainland China’s Zhang Yimou did this quite visibly in the late Nineties with The Road Home and Not One Less.

While the sociopolitical heart of Hou’s work would seem akin to the neorealists’ mission, his aversion to melodrama has always steered him clear of that style of filmmaking, and the temptation posed by its dramatically expedient urgency and desperation. Today, what remains most memorable about neorealism is not its originating ideology but its distinct emotionalism—the way it tapped into universal feelings of helplessness, which is reminiscent as much of great Disney weepers (Bambi, Dumbo) as of other cinéma engagé. But even as early as The Sandwich Man, it is clear that Hou was wary of making these kinds of emotional appeals to the audience.

At times he seems almost phobic of melodramatic shortcuts. Where Fellini allowed us to see Giulietta Masina’s face darken with disappointment, Hou has the female lead turn away from the camera, so that we are unsure whether she is wiping away her sweat or her tears. Where De Sica plucked our heartstrings in Bicycle Thieves with his child actor, Hou never allows us to form an attachment to the hero’s son, and in one passage, when the clown is harassed by a group of boys, the film presents a thoroughly unsentimental view of children and their lack of emotional responsibility. Concurrent with this resistance to emotional displays is Hou’s uniquely subtle attitude toward poverty—a condition whose banal, everyday, lived-in qualities interest him more than the obvious tragic dimensions that other directors emphasize.

In The Sandwich Man, Hou promotes the virtues of social consciousness—after all, the project was born out of a need to wake Taiwanese viewers to the realities facing their nation. Despite Hou’s tempered approach, the anthology as a whole can’t avoid didacticism, as it makes a very direct statement to the audience about poverty and powerlessness. We could take The Sandwich Man to be, in outline, the kind of blatant and purposeful social engagement whose pitfalls Hou would later spend his career avoiding. Or we could appreciate it as the first true manifestation of certain key elements in his aesthetic sensibility. Unlike his first three romantic comedies (Cute Girl, Cheerful Wind, and The Green, Green Grass of Home), The Sandwich Man doesn’t hurry its scenes along from one plot point to another. Anticipating the long-shot, long-take style of his best films, Hou creates a spacious sense of time through editing and cinematography that allows us to patiently observe action unfolding. A number of scenes follow the clown as he wanders aimlessly through his day, highlighting the ennui and inertia of his predicament rather than his anxiety. The stylistic choices here that most anticipate Hou’s later work involve sound: his minimal of music; the stretches of silence punctuated by ambient noise; and, as in City of Sadness, Good Men, Good Women, and Millennium Mambo, the overlapping of temporalities through voiceover. These innovations would later complement a broader, more exploratory vision of Taiwanese life, as Hou learned to rely as much on the hazy regions of memory and imagination as on the immediacy of present-tense experience.

The Sandwich Man represents an important transition for Hou, but its overall effect doesn’t compel one to dwell on artistic individuality. For a movement that has come to be so heavily defined by auteurist culthood, it seems incongruous that the New Taiwanese Cinema’s founding text would be a collaboration between three directors, one that allows the contributions of producer-screenwriter Wu Nien-jen (and his source, the short stories of “nativist” writer Huang Chunming) to take center stage. The films may vary in tone, but they seem to emanate from the same voice, suggesting the unified community that briefly existed in the first years of the new wave. Making generous use of the Taiwanese language, which was historically suppressed by both the Japanese and the Kuomintang, the film positions itself, at the most fundamental level, as protest cinema, extending Taiwanese literature’s taboo articulation of national selfhood. In the quarter-century since, Hou has been the major cinematic voice in that effort, contextualizing and reshaping the Taiwanese identity crisis not just for his countrymen but also for his small, passionate fan base around the world. As beautiful and universal as his work has become, and as internationalized a direction as his recent films have taken, he has rarely abandoned the national themes laid out in this first artistic breakthrough.