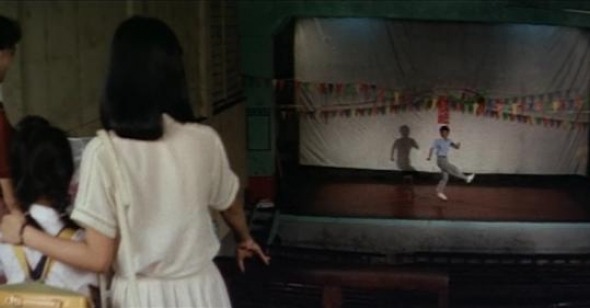 In his last Chinese-language film, 2005’s Three Times, Hou Hsiao-hsien reintroduced himself to audiences as one of cinema’s most exquisite love poets. The directness of that film’s lush beauty and sensuality highlighted a range of emotions that are central but often muted in his work. Looking back on an oeuvre whose towering subject has been the entanglements of Taiwanese nationality and Chinese identity—a preoccupation so grave and culturally specific it almost bullies foreign audiences into uncomprehending admiration—even ardent Hou fans are apt to forget how his masterpieces hinge on delicate portraits of romance, including the young sweethearts in Dust in the Wind, the humorous flirtations in The Puppetmaster, and the doomed affairs of courtesans in Flowers of Shanghai. How strange, then, to realize that Hou began his career with three blatantly commercial romantic comedies, vehicles for the Hong Kong pop star Kenny Bee (a.k.a. Zhong Zhentao) churned out in a brisk two years. Where love, like sociopolitical identity, proves compelling but indefinable in his mature work, there is nothing mysterious about it at all in his first features Cute Girl (1980), Cheerful Wind (1981), and The Green, Green Grass of Home (1983)—whose juvenile English titles are reflective of how minor they are. Stripped of such undesirable byproducts as lust, jealousy, and personal compromise, love flows easily enough between Bee and his female costars, so that director and audience alike can feel free to take it for granted. In the first two films, when the couples finally overcome their challenges, finding their path toward uncontroversial marriages, Hou extends them his non-ironic “Congratulations!” in cheeky end titles, as if to insist he was really invested all along in their predictable happiness.

Cute Girl begins with Bee and actress Feng Feifei meeting in rural Taiwan, he as a surveyor seeking to develop the land and she as a filial city girl visiting family in the countryside. Though she has already been set up for marriage to a nerdy foreign-exchange student in France (Chen You), the two end up carving their names on the village “love tree,” thereby ensuring a happy ending together. Cheerful Wind reunites the pair, this time with Feng as a young woman with dreams of traveling to Europe and Bee as a blind man willing to wait as long as it takes for her return. Perhaps the most noteworthy of the three, Green, Green Grass casts Bee and a new ingénue, Jiang Ling (who gets almost no dialogue), as schoolteachers in the countryside. Where the first two films were built on the universal romantic-comedy set-up in which a woman must choose between the cold intelligence of one suitor and the open-hearted spontaneity of another, Green, Green Grass finds Hou loosening up and departing from strict genre templates, rooting his film in the particularities of his setting, and willfully distracting himself with anecdotes from the extended family of his colorful supporting cast. While the female characters are far more marginalized here than they are in Cute Girl or Cheerful Wind, his portrayal of the emotional lives of children—which would become so central in his most autobiographical films—gains a new sophistication. But even in spite of these developments, the film is of a piece with the breezy sentimentality of its predecessors and, like them, ends with a social and moral message: where Cute Girl warns against urban encroachment, and Cheerful Wind encourages patience, charity, and loyalty, Green, Green Grass teaches grade-school lessons of environmental responsibility and conflict resolution.

It can be unpleasant to watch Hou—famously delinquent in his youth (he depicts himself as a budding street tough in the autobiographical A Time to Live and a Time to Die), achingly poetic in his art—stumble through these polite genre exercises. There are moments that anticipate Hou’s knack for narrative playfulness—such as the films’ dream sequences, or the film-within-a-film that begins Cheerful Wind—but they obviously stem from the hodgepodge, variety-show nature of Chinese pop sensibility rather than the aesthetic and historical interrogations of his later films. Since Hou has a tendency to compartmentalize large chunks of his career in threes, these earliest films constitute a kind of unintentional trilogy that invites comparison to the more deliberately and confidently stylized efforts that came after, including his reminiscences of childhood and adolescence (A Summer at Grandpa’s, Dust in the Wind, and A Time to Live and a Time to Die), his sweeping chronicle of Taiwan in the twentieth century (City of Sadness, The Puppetmaster, and Good Men, Good Women), and the romantic triptych of Three Times. Like those films, these comedies mirror each other thematically; unlike them, they are for the most part interchangeable, lacking in the powerful, deepening variations of the later trilogies.

The green fields of the Taiwanese countryside are constants throughout these early works, and one of the ways a viewer can chart Hou’s development is to study his approach to the Taiwanese landscape in this first trilogy and then in the ones that follow. In the romantic comedies’ widescreen compositions, the camera roves around without much interest in its surroundings, anchoring its attention to characters and objects important to the plot. Even what’s natural comes to look like a studio construction built for a specifically theatrical purpose. The rural landscape is figured in terms of pastoral innocence, and the deep-seated conflicts between urban and rural communities in modern Chinese and Taiwanese history are only hinted at. As picturesque as the images sometimes are, the scenery functions as mere backdrops for scripted drama, and the genre constraints provide no room for contemplation of one of the abiding mysteries in Hou’s oeuvre—the ineffable essence of place.

Beginning with A Summer at Grandpa’s, landscape becomes soulful and expansive while, paradoxically, its boundaries become more forbidding. The audience can get lost in the terrain of these middle films the way Hou’s fictionalized grandmother does in A Time to Live and a Time to Die. Finally, at the height of his extraordinary partnership with cinematographer Mark Lee Ping-bin (particularly over the past 15 years), Hou moves inward, toward a more aestheticized, emotional style, taking account of how the history of a landscape dances on the edge of objective and subjective experience. While Chen Kun Ho’s straightforward framing and inconspicuous, natural palette would define the early work, Lee would be responsible for the gradual re-envisioning of Hou as a modernist and sensualist, introducing the deliberate style of mise-en-scène, and the depths of light and shadow, that would turn Hou into a great visual artist. (It is perhaps important to note that Hou would never again utilize as wide an aspect ratio as he did in his first three films, allowing for the intensity and purity of perception you find in the mature work.) The story of Hou’s career has been, in part, an evolution from the breezy, unstudied images of Cute Girl to the delicately wrought art objects of the later years.

Kenny Bee—seeking solo attention after leaving his Cantopop band, the Wynners—could never have guessed he was acting as a stepping stone for an artist who would later be considered difficult and high-brow (or, in Armond White’s description, “coterie”). Unlike the Hou of the past decade, whose main audience has been comprised of festival goers and cinephiles, these earliest films are tailored to the average Chinese-speaking viewer. Like much of the Taiwanese commercial cinema of the time, they exist in Mandarin and Cantonese versions, with smatterings of the Minnan dialect to establish local flavor. But for many Westerners, the thin charm of these toss-offs will be all but lost. With their almost juvenile sugary-sweetness (complete with chirpy, endlessly repeated theme songs), they feel like watered-down versions of the sharp and tart Chinese genre flicks (mainly those of Hong Kong) that are prized here, and certainly worlds away from the heft of Hou’s most monumental films.

It is awkward and a bit absurd to hold such films up under the auteurist microscope. But it is also unavoidable because that is the kind of attention Hou’s audience has become accustomed to giving his films. Contemporary Chinese viewers will still be more likely to find these trifles nostalgic mementos of Bee’s popularity, rather than as the debut works of the New Taiwanese Cinema’s most internationally celebrated artist. In fact, the Hong Kong DVDs on which the films are most readily available do not even make mention of Hou on their cover art, and instead emphasize Bee’s starring role. This would not be the director’s last collaboration with a superstar boasting a mainstream pan-Asian following—City of Sadness’s Tony Leung springs to mind as another Hong Kong import who, like Bee, did not always make a comfortable fit with his Taiwanese surroundings—but in the future these actors would come to Hou in order to prove their versatility as thespians, instead of requiring him to match his directing style to their celebrity image.

Like many of the singers-turned-actors of Hong Kong cinema, such as Aaron Kwok and Leon Lai, Bee presupposes the audience’s relationship to his likable but static persona, so that the comfort of familiarity often substitutes for real charisma and skill. His acting lacks the distinctiveness of his famously husky singing voice, partly because all the dialogue is dubbed by someone else, in a much higher pitch (Taiwanese films only started using sync sound when Hou made City of Sadness in 1989). At his best, Bee resembles Donald O’Connor in Singin’ in the Rain, given to nonstop tangents of spontaneous slapstick; at his most ineffectual, he can make decency and affability seem tiresome and strangely desexualized. The films’ dependence on Bee’s now-faded stardom only serves to remind us, by contrast, of what makes the best of Hou’s work so original and profound, namely his shifting of character and persona away from center stage, his perfectly calibrated sense of what it feels like to be a human being dwarfed and engulfed by time, and his passionate enactment of the ways people (not just individuals, but families, nations) navigate the quicksand of history. These three early films offer a fascinating look at an artist searching for his voice with the only vocabulary available to him. By the end of this phase in his work, he was already beginning to pave his way toward a more personal and expressive language.