The Duchess of Langeais 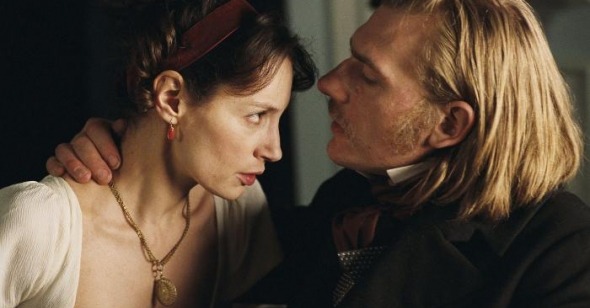 Where the Time Goes
Benjamin Mercer on The Duchess of Langeais

A late masterpiece for vanguard Nouvelle Vague member Jacques Rivette, who was 80 years old upon the film’s completion, The Duchess of Langeais might first seem somewhat miscast in the role of Promise for the Medium’s Future. The film is by design backward looking—as one would reasonably expect an old lion’s costume drama to be. But in all of cinema there is no other period movie with clockwork quite like this one—wholly unique in its particular patterning of the historical past, as well as a sort of veiled call to action about how the cinema, in particular, might continue to generate novel interpretations of lost time, practically ad infinitum.

As the film opens, General Armand de Montriveau (Guillaume Depardieu), a marquee hero of the Napoleonic Wars, appears on-screen inhabiting the role of an unsettled audience member. He’s seated by himself in the pew of an austere chapel that’s been carved from the coastal Majorcan rock, facing the church’s organ, which resounds through the space from behind metal bars, themselves only visible because a large red curtain has been opened for the service. The convent’s nuns can be heard singing from the remove of the organ loft—there is a stage, as it were, but the performers must toil away from it, and the congregants are left to contemplate a kind of void in their absence. The camera tracks in on the General from behind, fluidly wheeling around to find him angled at a slouch, in a state of obscure inner turmoil, his jaw tensing as he nervously runs his tongue over his teeth, or perhaps bites his lips surreptitiously. At the change of the song, he becomes more visibly agitated, finally fumbling his cane against the bench and storming out of the church, his wooden right leg knocking loudly against the floor and echoing throughout the stone sanctum.

The General returns to the place of worship the following day. This time he’s drawn forward by a single female voice, but the curtain remains closed, and the voice falls silent as he first whispers, and then shouts, the name Antoinette. Trading in some of his influence, he eventually gains an audience with the woman he’s seeking (Jeanne Balibar), though the two are also separated by a wall of metal bars, across which a curtain has been opened. Once exposed to each other, the two quaver through a coded conversation, each party facing toward the camera, with the anguished man in epaulets looking out in the foreground. The viewer might well in this moment identify with his desperation to assert control over the uncertain moment.

But this meeting ends abruptly. The mother superior draws the curtains shut, Antoinette having finally confessed that she and her interviewer are in fact lovers, not siblings. And so it is that Rivette, using a comparatively minuscule novella from Balzac’s vast Human Comedy, takes us back further still into the past, opening yet another curtain to reveal what, precisely, transpired between them.

The heart of this immaculately pared film—known in almost every other country in the world as Don’t Touch the Ax, the original title of the 1834 story—takes place five years prior to the opening scenes, the impenetrable labyrinth of the looming Mediterranean convent giving way to an equally strange network of society interiors (ballrooms, anterooms, and boudoirs) deep within the Restoration Faubourg St. Germain. This is the site of an extended flirtation between the Marquis Armand de Montriveau and the fashionable Duchess Antoinette de Langeais, married to a nobleman who is nowhere in evidence. A pas de deux of forestalled desire unfolds behind still more drawn curtains and under dancing candlelight.

Rivette, often renowned for his playful preoccupation with the theatrical, here delivers something that more closely resembles a backstage drama, one that sets us down in a closed-door interim between great historical events, none of which take place on-screen. The space is private, but the story’s would-be lovers still cannot agree to drop, at least simultaneously, the rehearsal of their more decorous public personae. The film settles into an almost metronomic cadence. Throughout, the director punctuates image with text—white-on-black intertitles, including both descriptive elaborations and provisional time stamps (“The following day”), routinely punctuate the action—imparting the sense of an ordered deck of scenes, but one that just as easily can be reshuffled, or else expanded to include a whole other suite of loaded exchanges. The encrypted message: one might play with the past—and in turn, perhaps, reveal anew the ways in which the past is always playing with us.

The intertitles gradually call attention to the film’s close-to-the-letter relation to its source material, as well as the linguistic bedrock shifting beneath the main couple, who always appear to be talking past each other during the nightly boudoir visits that follow their meeting at a ball. The already artfully stilted narrative grows choppier in its final Parisian stretches, as the affair hastens toward its end, and the title cards intrude more frequently to announce the chronology of the lovers’ unmet ultimatums. But never does the film stray from its entrancing, nearly occult, rhythm: the crackle of fire, the ticking of clocks, and the insistent knock of that solid-wood right leg against the floorboards. Every so often a bell rings, summoning servants to adjust the candlelight.

The longer you watch, the more intricate Rivette’s arabesque appears—there is a sort of patterning evident even in the unrulier human interactions. The marquis’s signature movement is the startling lunge forward, in exasperation, after his declarations of love fail to register, while the Duchess beats a roundabout retreat from his protestations, apparently more beholden to high-society appearances than any feeling for her lower-born visitor, who’s only lately risen in stature on account of his accomplishments in the field of battle (and perhaps due to his membership in the cloak-and-dagger Thirteen secret society, which we learn little about, but whose lair we see him entering).

This is how the courtship sputters along—that is, until the threat of violence forces a hard-to-square reversal of their affections: Armand enlists the Thirteen to kidnap Antoinette, then he threatens her with a branding iron; she pledges her suddenly undying devotion to a man who himself suddenly appears to go cold, having been somehow pushed beyond affection by his threatening act. She keeps issuing the avowals of love, but to no response. When one finally comes, it’s too late: she’s already on her way to the cloister (the two are split on the matter of religious devotion as well). The film had begun as the marquis finds her tucked away in a Barefoot Carmelite convent in Majorca, and it comes to a close as years of deprivation have stoked his passion for the Duchess to an unforeseen degree, leading him to plot a tactically complex kidnapping to outdo his first.

The Duchess of Langeais’s furnishings suggest a deep fidelity to the early-realist world of Balzac, with sparse, quality-over-quantity finery, but the narrative design calls to mind some strange Oulipian game. The film is a rather sober affair for Rivette—even the movie he made after Duchess, Around a Small Mountain, revolves around a circus tent—its gamesmanship more submerged. He does not appear to show daily life flowing both through and around a ludic structure imposed from the outside, but rather reveals, gradually, the complex stratagems underlying even seemingly idle talk: competing impulses keep squaring off on a board where the obstacles to victory are various codes of conduct. And history here appears as an endless trove of under-the-surface conflicts, a regress through which a number of little binary tensions each throw off a whole lot of sparks: directness and indirectness, punctuality and fashionable delay, religion and irreligion, nobility and the lower orders, desire and reason; Antoinette’s uncle advises her at one point that “life is simply a complication of interests and feelings.”

If the primary stuff of narrative is conflict, then The Duchess of Langeais—which tours through a series of nested rooms, carefully unpacking live-wire tensions and eerie doublings—reveals the past as a practically boundless narrative resource. Even holding just a few threads of that vast tapestry up to the light can reveal strange new parallels with the viewing present. For example, a person might sit down to enjoy a movie that conjures a distant past, only to find that the main character has become a restless spectator himself, desperately trying to recover an idealized time that never existed.