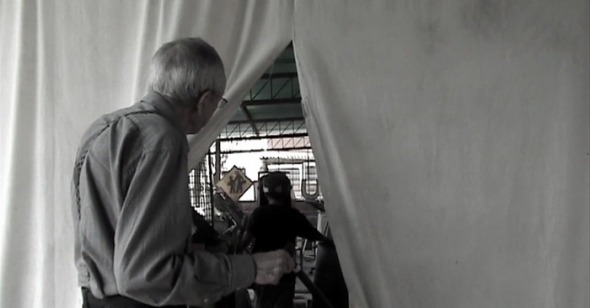 In 1991, in the French daily newspaper Libération, Serge Daney began writing about the coverage (or lack thereof) of the first Iraq War, and it was here that he famously drew the distinction between what he called “the visual” and “the image.” Daney’s terminology defines the visual as a sort of functional form of imagemaking, one that is meant to be informative, easily read, but not quite seen—an image reduced to the legibility of a code. The visual would include things such as television news coverage or surveillance. Against this, Daney posits the image as that which still bears the signs of cinematic purpose and craft, rendered not as information but as experience.

Daney’s distinction between these terms is not quite the old opposition of technology and techne (the merely mechanical versus the artistic), but for many it might as well be. Daney, dying of AIDS and writing from his sickbed, was pondering a death of another kind, a process that now might seem to us complete. The pervasiveness of the visual, a technologized mode of looking that enables everything from baby cams to drone assassinations to camera endoscopies to the immediate mediation of a live concert, apparently places us in a world that exists definitively and irreversibly “after the image,” to use another Daney phrase. Now we are no longer in the position of marking distinctions, but of charting the spread of an overwhelming visual feed, the extent to which it has invaded and overpowered the image, rendering impersonal and general that which is personal and specific, denying any sensory complexity in favor of a universal readability and functionality.

But if this spread of the visual is accomplished, we might ask, what happens when the image instead invades the visual? How can the flow of the visual be incorporated into a more personal vision, a cinematic way of looking?

Enter Venezuelan videomaker Andrés Duque, whose two feature-length works and handful of shorts strive toward a new consideration of the visual, attempting to draw it back into a project of personal image-making. The two features are curiously complementary and often dizzyingly opaque: 2011’s Color Runaway Dog and 2012’s Dress Rehearsal for Utopia are works of vertiginous montage, and each mine the director’s large (and seemingly disorganized) hard-drive archive of everyday images, observational footage, ripped DVDs, and YouTube objets trouvés. As Duque’s epigraph to Color Runaway Dog makes plain (in an idiosyncratic English which I preserve here):

I have no celluloid or videotapes. I only have numbers stored on hard drives and memory boxes called Quicktime. From them, I extracted images—now put together—ordered and presented with sincerity.

Although, truth, are not.

In each feature, a sudden occurrence—a broken ankle in the former and the death of his father, Silvio, in the latter—prompts Duque to plunge into this collection, to wander among images from the near and distant past. Portraits of friends and family, records of trips to Barcelona, Mozambique, and Italy, ephemera sourced from internet chatrooms or ripped from DVDs of classic films—all intermingle in an assemblage that suggests not just the vast and incommensurable flow of the visual, but also of discrete types of images: home movies, travelogues, online videos, commercial cinema, propaganda, cell-phone autoethnography, archival document, even dance films. At the center of Duque’s work is this archive, this library—a Borgesian accumulation of the world’s images. But this archive is an index of lack (of lost artifacts and missed connections) rather than an orderly or authoritative compendium of information. In these works, Duque is interested less in the order of things than in the way this wealth of the visual might still capture a glimpse of the real, catching it in fleeting instances in seductive, disjunctive ways.

Few works lend themselves less to synopsis than Duque’s two features, but it may be useful to give it a go anyway. Color Runaway Dog‘s adventure is partly inspired by a scene from Bill Douglas’s autobiographical 1972 film My Childhood in which a boy—the runaway of Duque’s title—climbs over the railing of a pedestrian bridge above the train tracks and jumps onto the top of a coal-car passing underneath amid a thicket of steam. It is a romantic, cinephilic vision of boyish wanderlust to match the final moments of The 400 Blows. But of course when Duque attempts to replicate it in real life, he lands with a thud: his handheld camera jostles to the ground along with him, and later documents the arrival of the paramedic, the trip to the hospital, and finally the grim view from his sickbed. After a few minutes of idling on Chat Roulette, Duque begins his journey through the hard drive, visiting diverse locations in Barcelona and Caracas, and resuscitating images of his family and friends. Many of these moments are vivid in color, but strangely out of place: the image of a screaming Bruce Lee on a mass-produced shirt amid the uniformly red outfits of Caracas’s Dionysian San Juan Festival; a lonely SpongeBob SquarePants balloon against a rich blue sky; assorted outtakes from Duque’s other works, including his first short, Iván Z, about the cult filmmaker Iván Zulueta. These strange images are without place, a runaway reality held for a moment before it flees. Duque follows them with a tribute to yet another runaway, his now-departed dachshund Román, who apparently committed suicide by jumping out of a window. As a confessional subtitles tell us, "Sometimes I imagine him flying and I shudder. I see a blur that falls into the void. A difficult blur to describe, but definitely a color."

Whereas Color Runaway Dog offers its audience directions through onscreen text, Dress Rehearsal for Utopia charts a similarly wayward course without the cues. We discern only midway through that its primary theme is the death of Duque’s father, whom we see first lying in a hospital, hooked up to a series of tubes and wires. A TV narrator’s voice emanating from elsewhere in the hospital room: "Undoubtedly, the first labyrinth that ever existed was in the human body." And Duque seems to create his own labyrinth with its own maze of unfamiliar memories, associative, foreign, and obscure: a park bench in the jungle, a rainy quarry, a dog on a beach, hip-hop dance competitions, and, somewhere in sub-Saharan Africa, kids dancing, fighting, and mugging for the camera. Every image has a darkling tinge, blurred and haloed and rusty in color. And even the cinematic references are oblique: a shot of the signage of a crumbling theater that reads "Cine Africa" gives way to a pirated clip from Robert Lynn’s exoticist 1965 international coproduction Mozambique, which leads to an extended sequence of archival footage from the moment of that same country’s independence in 1975, with men and women dancing and brandishing Kalashnikovs on a beach at sunset. And the soundtrack offers its own ripple of strangeness. In one of the first images, Duque responds to a friend who has asked how he is doing, "I’m sad because—," and his voice is immediately interrupted by a loud drone. Thenceforth, the images are accompanied by a subtly disjunctive sonic plane of misplaced birdsong and especially a low, almost subsonic fizzle and hum that is alternately disconcerting ("Is there something wrong with the sound?") and soothing.

Both of Duque’s digital features play with this alternation between the uncertain and the palliative, but Dress Rehearsal for Utopia seems intent on delaying the latter, and to greater effect. Taken individually, Duque’s intimations of utopia are somewhat murky, but together they emerge as recognizably pure, if undeniably idiosyncratic: on the one hand, dance and revolution; on the other, quiet, treasured moments with his father just before and after his death. What for much of the time seems like a random assemblage of images, the arbitrary flood of the visual, quite suddenly comes into focus as something personal, local, embodied in certain privileged moments. In one shot, Silvio, with the help of Duque’s mother, laboriously puts on a sweater, and then picks up a magazine to read, in a frail voice: "Because as much as time passes, the soul doesn’t change." Later, in a final succession of moments, Duque returns to footage of a trip he had made with his parents in Italy, gradually transforming what seems like innocuous tourist movies into a surreal record of his father, now dead, wandering amid monuments and museums. The grandly historical and the minutely intimate fold into and comment upon one another, together at last on the same conceptual plane.

Despite its mix of sources, times, and references, Duque’s work doesn’t really function like other found-footage or archival films—it’s neither a sentimental return nor an effort to pinpoint and interpret specific moments of private, historical, or cinephilic significance. Duque’s freely associative structure is less about reviving the past than about opening up new passageways, ones that either convey the viewer into a new space or leave him wandering aimlessly in the labyrinth. The two key words of his titles—runaway and utopia—point to the exit door, a way into that immediate alternate reality which only cinema’s images can conjure, one composed in the interplay between chaos and order, sensations and sensibilities, the physical and the virtual.

In a way that distinguishes them from most works that deal with pre-existing footage, Duque’s work suggests that what continues to define cinema—against a purely iconic, informative mode of visuality—is the way in which it affords us privileged access to lived experience. These are not fussy, dusty archival excursions, but portals into the real, invigorated by the easy access that digital technology affords. This is not to say, however, that these works are entirely without ambivalence when it comes to new technologies: as Color Runaway Dog at one point posits, the Internet also seems like a possible utopia, but it’s immediately disqualified:

Internet is not even close of being a utopia. But it seems that it solves a fundamental dilemma. The dilemma of how to live together while keeping distances.

The Internet may seem like a way of connecting discrete sites of intimacy and experience, but it preserves only the distances; the multiplication of connections and associative gestures found in the cinema—home movies and propaganda and art cinema alike—is what defines the utopian, conjuring up a space of riotous associations that are more felt than thought. Thus while Duque makes use of the remnants of the past and images of a fleeting reality, they also bring us into proximity with something undeniably physical. Duque’s is a utopia of the body, too, found in the raucous percussive partying of the San Juan Festival in Color Runaway Dog, and in the many images of celebrating Mozambican revolutionaries and leaping synchronized dance troupes in Dress Rehearsal for Utopia. The title itself hints at this: the phrase derives from Robert Stam’s 1989 book Subversive Pleasures, where it describes Mikhail Bakhtin’s notion of the carnival as a site of performance and opposition, of "ecstatic collectivity," of sensual riot, dance, revolution.

This utopia is itself a struggle—with the inexorable power of the state and the inevitability of death. For Stam, the carnival is the ultimate performance of the “oppositional culture of the oppressed,” a liberation of creative, sensual, and social energies. But it is also the body’s struggle with mortality—etymologically, the carnival is "a farewell to the flesh"—just as in those last few moments of Duque’s father’s life, in which he wrestles with a body that is soon to evict his soul. After the moment of Silvio’s death, more strange images from the threshold of the real: figures in the street, levitating off the ground, shudder slightly back and forth in mid-air as if caught between worlds, as if paused between frames. In this instant, all experience is struggle, a moment between life and death, a blur that falls into the void.