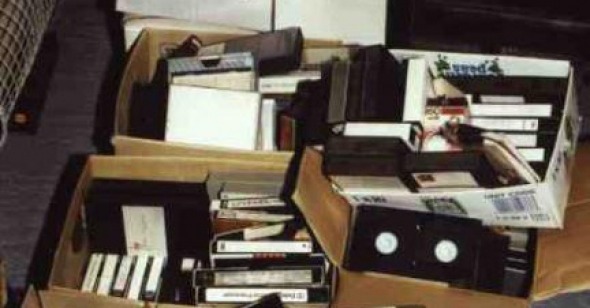 With so many think pieces on the topic at hand, a few simple pieces of thought might help fragment the grand narratives being so diligently woven. In no particular order:

1. Walter Benjamin’s adage about methods of perception changing along with methods of reception has been much favored in academic film circles, and in diluted form in certain critical ones as well. It remains naggingly unbanishable because, to a certain degree, it’s correct. Not only the methods of exhibition (screen size, format, home or theater, etc.) but also the relative availability of works exerts certain phenomenological effects upon both our immediate attention and our larger conception of moviewatching.

However: if our ways of seeing have certainly been affected (if not incontrovertibly changed) by these advancements—or perhaps we should say, more neutrally, “developments”—in film technology and distribution, the content of what we are watching has not significantly altered along with it. On the production end, format is and remains a tool, not a determinant. Certain exceptional artists have used certain of these developments to their great advantage, but such is true of many exceptional artists throughout the ages—the employment of novelty is, essentially, a traditional practice.

On the reception end, our expectations and reactions of a work continue to operate more or less unaltered, conditioned as they are by the greater or lesser cultivation of our respective tastes. “There is too much talk about what we are going to do about public taste, and how we could improve it if the movies wouldn’t debase it. Public taste is simply there, like an appetite for pie, and doesn’t really change after all,” wrote Otis Ferguson back in 1936, and that constancy remains true for the decriers of debasement as well. If art in any field is ever changing, it changes within the boundaries of our stable and faithful need for what it can provide. Writing on the debate over the “degradation” of films when shown on television, Serge Daney had this to say: “There must be enough faith in images (and in the audiences to come) to believe that where once there has been beauty, there cannot be nothing at all overnight.” Conversely, where there has never been beauty there cannot be something simply by trading in film stock for digital.

2. Undeniably, the age of video spawned our current state of being accustomed to having “everything” available to us at all times. Film history (in theory) no longer has to rely on rare screenings or archival digging to advance: previously hidden treasures are spilling out at our feet seemingly every week. Indeed, it is historical consciousness rather than any elements of perception that has been most decisively altered by these developments, precisely because those key artists who defined and oriented the cinema for previous generations—Bergman, Fellini, Kurosawa—have been the earliest and most readily available for those who came of age during the video era. Eager young—perhaps too young—film enthusiasts could see The Seventh Seal or 8½ or Seven Samurai on cassettes from the local library, thus relegating complex and brilliant artists to the status of “gateway” filmmakers for an emergent generation not yet ready to assimilate the true extent (and limitations) of their achievements.

This is not to suggest that such foundational filmmakers have been unduly neglected, of course, but rather that this generation’s relationship to them differs considerably from that of their elders. The progressive unfurling of cinematic treasures on DVD has made these certifiable masters less the divine yardstick of merit than fellow (fine) artists who had the virtue of wide distribution and easy availability. And it is that very availability, and consequently familiarity, which can sap some of their appeal for the committed cineastes among this era’s enfants terribles. Contextualization can result in a certain amount of devaluation, and perhaps some weariness at the lengths to which previous critical generations have hashed over the same constellation of artists—and some envy that they got there first.

Accordingly, this heretofore unprecedented film historical development—however incomplete it will inevitably remain—has both the invaluable effect of progressively widening our sphere of film knowledge and the more questionable one of driving us to find our own “territory” to stake out—hence, perhaps, the hyperboles poured over the “new” and the transformations of vision which are attributed to them.

3. There are regularly recurring suggestions that the changes—namely the miniaturizations—of exhibition technology could make movies more like music: integrate their presence into the rhythm of our daily lives rather than confining them to a period of concerted attention within a delimited screening space. Favorite sequences could be replayed like favorite songs—though to this writer, who has yet to own a discman (let alone an iPod), the notion seems especially foreign. Even putting the prominent role of personal preference aside, to fragment films in such a way involves a fundamental, and implicit, violence exercised upon their being. Albums and films may be akin in their general outlines—wholes made up of fragments (songs or scenes)—but those fragments have far different functions within their respective wholes. A song may serve an album-oriented purpose, but it is by its very nature far more of a self-contained entity than a film sequence—which, even if it is intentionally designed as a setpiece, has the obligation to serve a specifically narrative function (this of course does not apply to certain experimental works, but I’ve yet to hear of anyone suggesting that Brakhage be watched on wrist TVs). Our cinephilic hearts may indeed by exhilarated by moments of filmmaking, but those moments are indebted to their participation in a continuum, and it is due to our immersion in that continuum that those moments can carry such resonant force.

4. For all the talk about new ways of seeing, there are precious little indications that new forms of criticism are being developed to deal with these presumed “evolutions.” Ancestor worship reigns in print and online both, and the bold new guard has inherited, in many cases unquestioningly, the tastes and strategies of their forebears. The specter of Kael haunts too many pieces to count, and the seemingly neverending valorization of the “New Hollywood” carries on apace. To a large extent, today’s critical skirmishers are still fighting old battles—and as with so many of the points outlined above, this has both positive and negative connotations. The awareness of our inheritance has produced a remarkable amount of dialogue with the past, creating a pronounced continuation of informed and intellectual criticism which stands in proud contrast to the shilling for product which is, as it has always been, the predominant form of film journalism.

On the other hand, this dialogue can oftentimes become the recitation of holy writ, not so much “thinking with” as “thinking as.” The legions of would-be Kaelites are only the most egregious examples. Adopting a pose seems, unfortunately, something of a necessity for the practice of criticism, and its falsities overlap so much with the genuine foundations of discernment, knowledge, and articulateness that it is often hard to disentangle them. To merely state a truism, we’re all inflexible on certain points, and those inflexibilities have been conditioned in us by the respective forebears we’ve opted to follow. Tradition and continuity forever haunt the pursuit of the new, and our very definitions of the new will continue to draw upon what we’ve inherited from our chosen pasts.

5. An evident point that is often overlooked: the rise of video, and subsequently DVD, has decisively tipped cinephilia into the realm of possession as opposed to experience. The great boon of increased availability, as well as the invaluable scholarship in the form of booklets, commentaries, and other DVD features, is inextricably intertwined with the film’s status as product. In many ways, this is simply a continuation of the long-standing fetishization of cinematic experience; but the very act of purchase mixes the selflessness of movie love with the selfishness of ownership. This is not to condemn the former in the slightest— merely to highlight the considerable back-and-forth relationship between the two.

No grand conclusions here, simply some observations—and a reminder that however far out on this year’s model of the cutting edge we think ourselves to be, we are still beholden to the pasts that have shaped our particular forms of dedication.