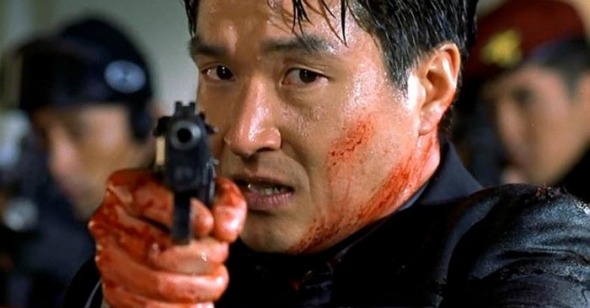 Many have pointed out that the 20th century was, above all, the era of acronyms—letters and dots standing in for something that remains ultimately in the dark. What they signify is never clear and is not supposed to be. Transnational institutions and corporations bank on this suspension of meaning to spread their tentacles and sell themselves as the inevitable consequence of a state of affairs in which the nation-state has primarily become a facilitator of a series of transglobal processes of exchange. IMF and WTO: International Money Fund and World Trade Organization. We are all included. Or, shall we say subjected? The asymmetries of power that shape the exchanges between nations the two latter institutions perpetuate stays repressed in the very enunciatory power of their limitless reach.

The consequences of the transnationalization of capital that the WTO has fostered in the last 15 years are unprecedented for filmmaking. Once the collapse of the Soviet bloc became effective, the Chinese market opened up and the master narrative of the digital planted its roots almost everywhere on the planet; concurrently the Hollywood giant has grown steadily. In parallel, non-U.S. film national industries have mostly weakened. With the exception of India, France, China, and South Korea there’s no national cinema that has dealt successfully with the so-called global era. Even the booming Hong Kong cinema of the eighties has bowed to the Titanics, Shreks, and Armageddons.

More than ever a multinational enterprise, Hollywood controls 90% of the world film market. Faced with this situation, filmmakers working with a limited spectrum of production, distribution, and exhibition routes in their respective countries encounter the need to change the ways in which they aim at competing with Hollywood’s spreading power. For Je-gyu Kang there was only one way out: appropriate, recycle, tint with national specificity, and sell. Shiri (1999) is the very product of this approach. As Chris Berry has argued, the blockbuster is no longer a feature of American cinema but a transnational product. It’s not a matter of simple mimicry but of appropriation and translation. All over the world, filmmakers plunge into the generic codes that Hollywood cinema has popularized for decades in order to bank on their recognizibility on the spectator’s behalf, capture a share of their respective national markets and venture into the international field. However, most of these products, while highly successful nationally—Les Visiteurs (1993) in France, Torrente: el brazo tonto de la ley (1998) in Spain, to name a couple—failed to succeed internationally. As opposed to the new generation of “world cinema blockbusters”—Amores Perros, City of God, Open Your Eyes, Shiri—they relied on the national specific and failed to instrumentalize the “common ground” of Hollywood cinema to market themselves. One formula that definitely sells is fear…via disaster.

One of Shiri’s main goals was to do away with the tradition of awkward fight scenes in Korean cinema. Je-gyu Kang bowed to make them more “real”—the model being the technologically created illusionist spectacles of the Hollywood action thriller. Conspicuously, the producers of the film rented $20,000 worth of weaponry from Gibbons Ltd., a Hollywood-based company. Limited by a $5 million budget, all the special effects were a product of the Samsung Corporation. In addition, Shiri featured for the first in the history of Korean cinema a person exploding onscreen. The challenge was paramount. The outcome, at least in terms of numbers, was phenomenal. The film beat the record set by Titanic in the Korean box office and conquered the top of the Hong Kong market for several weeks. Moreover, making the film more real not only entailed effectively mimicking the Hollywood spectacle but also addressing a “truthful” situation. Consequently, Je-gyu Kang’s mobilizes the latent fear of a flare-up in the North/South Korean conflict. He reduces North Koreans to a group of bloodthirsty Communist zealots that aim at cracking the unstable balance between the two halves of a country traumatically split in half. As the opening title card states: “Hostilities may happen anytime.” Throw a melodramatic substratum to anchor the story—the unexpected meanders of an initially perfect heterosexual romance turned into havoc—and a series of over explanatory episodes of male bonding a la John Woo into the mix and Shiri achieved the unthinkable: It beat Hollywood at its own game in Korea and part of the East Asian market.

If, in the case of Korea, the open wound of the division North-South remains a capital source of national anxiety and fear, the Almighty military and technological position of the United States of America in the current geopolitical landscape situates the natural, outer-space threat center stage. Since in the pre 9/11 world, no nation-state or transnational religious/terrorist (they have come to signify the same these days) group seemed to be capable of threatening the well-being of “America”—that continent turned into a country by a discursive gesture that makes the world a secondary province of the United States—a Texas-size meteor hitting the earth had to be invented in order to generate the very possibility of American—oh, excuse me, a human race—demise. Armageddon features all the staples of the disaster genre film: state-of-the-arts special effects, the reduction of the non-U.S. world to a series of clichéd “emblematic” images, a high-testosterone narrative drive—the earthy macho shall prevail, Amen!—fast cutting, in-your-face camera movement, and, ultimately, salvation and redemption. And, yes, there’s a beautifully enhanced image of the WTC towers featuring two holes that now are uncannily familiar. (If the World Trade Center plane-crash disaster surprised the world with its utter brutality, the spectacle of the planes crashing into the twin towers did not. We had seen it before, numerous times. Cinematic products had enacted the WTC catastrophe from all possible camera angles as a pleasurable spectatorial scenario.) Armageddon is a formulaic tour de force that suspends all ethnic, class, and sexual inequalities for the sake of a Universalist message that cancels out all active sociocultural battlegrounds.

The “Global Disaster Blockbuster” was arguably the leading box-office record-breaking film genre of the multiplex during the Nineties. From Die Hard to Armageddon, the disaster blockbuster functioned as a consumer product that fulfilled the spectator’s repressed fantasy of “order reestablished through heroism after initial evil catastratophe/menace strikes.” In the catastrophe blockbuster’s narrative, initially, massive destruction and human slaughter strike brusquely a harmonic world—Al-Qaeda destroys the WTC. Then, order is reinstated through the hero’s intervention: he punishes the monster/antihero/gigantic meteor and everything goes back to “normal” (except for the fact that he typically picks up a girl in the course of his action-based salvation crusade; didn’t the U.S. pick up the hottest girl in Europe: the UK?). Significantly, the Bush administration’s “War on Terrorism” conspicuously mimics the blockbuster’s standard narrative move to bring back the lost order after the devastating catastrophe: Wasn’t Al Qaeda's punishment explained in detail by Donald Rumsfeld as innocent Afghani victims remained quasi-absent on our TV screens in the same way “colored extras” die in the background of the blockbuster’s frame, almost unnoticed, as fillings for the spectator’s craving for sheer spectacle? Good versus Evil, via catastrophe: Dubya put on his cowboy hat; the “Arab/Indian” was within his rifle's range. 9/11, as Slavoj Zizek points out in Welcome to the Desert of the Real was the moment when “the unthinkable which happened was the object of fantasy, so that, in a way, America got what it fantasized about, and that was the biggest surprise.”

The home-video footage of the first plane crashing against the North Tower was visually enhanced, reproduced in detail with computer-generated graphics, shown at different speeds and frozen repeatedly in the screen in the different competing newscasts. It reminded the viewer of the framing of spectacle in disaster movies. Now, however, instead of creating pleasure, it generated horror. The Hollywood fantasy-framework had become real. The “unthinkable” had indeed turned into a B-version of a Jerry Bruckheimer blockbuster. Moreover, the WTC disaster can also be viewed as what Zizek labels as the culmination of the 20th century Art “passion of the Real” since “the terrorists themselves did not do it primarily to provoke real material damage, but for the spectacular effect of it.” The terrorists did nothing but imitate the Hollywood studios’ multiplied efforts to make the fake spectacle of digitally created scenarios increasingly “real” and ticket selling.

Thomas Elsaesser points that blockbusters are “engines” that link past and future: “simultaneously raise expectations, stir memories, and unites us with our previous selves.” The real “WTC blockbuster” reversed Elsaesser’s formula. It reunited us with the fabricated realities of the disaster film and made them signify retroactively. The most unspeakable reality reminded us of our more pleasurable cinematic fantasies. It transformed our gratifying memories of cinematic hijackings and blown-up buildings into painful afterthoughts. A Western world Armageddon did indeed happen in 2002, and its consequences have been, are and will be utterly devastating for millions of people all around the globe.

The North/South Korea clash remains dormant so far. Korean filmmakers continue to imagine different ways through which to re-play the conflict. Significantly, Park Chan-wook’s Joint Security Area (2000) deals with the impossible friendship between North and South Korean soldiers. Attempting to escape Shiri’s ultimately formulaic shallowness and cheap propagandistic drive, Park’s film surpassed Je-gyu Kang’s in the Korean box office. The very imagining of disaster anywhere in the world seems to keep on being a guaranteed jackpot for production companies. Now, more than ever, non-U.S. national film industries take a cue from the widely established Hollywood genre films and refurbish them, manufacturing viewers’ consent through All-American-but-also-local works in which the national and the transnational exist as an inseparable whole.