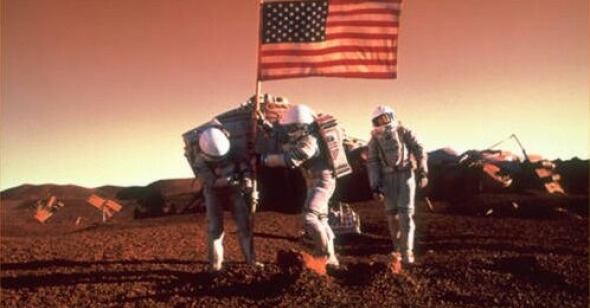 A. O. Scott, longtime microwave for film academia’s refrigerated leftovers, warmed up decades’ worth of Brian De Palma analysis to conclude, more or less, in his recent puff piece “Say ‘Brian De Palma.’ Let the Fighting Start” that “you can like movies just fine and still not like Mission to Mars.” Thus, the New York Times reader—conscript to the bunk that Little Miss Sunshine is unequivocal evidence of the health and vitality of American independent cinema, nonentity when the likes of Spider or Notre Musique quietly stroll into their local art house, and perennial straw man for blustering ideologues and laptop-tinkling webzine contributors alike—was gingerly taken off the hook for finding De Palma’s Disney-released, Razzie-nominated outer space adventure a gorge of processed cheese.

Graceful in its nearly clinical impersonality, Mission to Mars (2000) is De Palma-for-hire supreme: a CGI-dappled amusement flickering with faded traces of Spielbergian pathos but boasting a smooth, splendiferous surface and moving in an impressive array of ASC-amiable glides. It could be that De Palma signed up for the project merely to let his crane-affixed camera swim and swirl in a zero gravity diegesis.

Mission to Mars’ nuance-free dialogue (penned by Graham Yost and the Brothers Thomas, without whom the likes of Wild Wild West, the Predator movies, and Speed would have never existed), jargon-flecked but less impenetrable than Michael Mann’s geeked-out lingorhea, lobs softball proclamations not ridiculous enough to be outright funny—”Thank you for saving my life.” [handshake] “It was a privilege.”—but sufficiently cumbersome for critics to jeer. Add to that a set piece involving a slow dance scored to Van Halen and Mission to Mars seems a bête noire only Armond White and the French could love.

De Palma does his best to distance himself from the source material, infused as it is with proto-Shyamalanian/quasi-Scientologist explications. Truly oxygen deprived, the crisp tableaux that comprise Mission to Mars invoke Douglas Sirk’s layered flatness minus the glass surfaces and (duh) Hitchcock’s Technicolor-coded artifices far more than the glacial lysergic clarity of Kubrick, or Tarkovsky’s soggy metaphysics. In fact, De Palma’s terrestrial scenes, only a handful, have a slightly regressive cornball wholesomeness—Buck Rogers is the referent of choice, not Luke Skywalker’s blue-eyed samurai or the spacetime-transcendent David Bowman—suggesting that when it comes to space travel, the inner clock of the American unconscious is always set to the 1950s (naturally, the early days of cosmonauts and satellite launches).

Close-ups are few, and the players—Gary Sinise as the stoic widower Jim McConnell, his best buddies Luke (Don Cheadle) and Woody (Tim Robbins), Woody’s equally astronautical wife Terri (Connie Nielsen), and babyfaced jokester Phil (Jerry O’Connell)—seem to spend half of the film in spacesuits, their faces like little screens luminously projected inside black-box helmets, their voices clean and close, lacking the genre’s usual “naturalistic” bleeps, hiss, and huffing visor breath. This sense of enclosure encompasses the entire landscape—physical and psychological—of De Palma’s spacemen. (The few females—Nielsen and Kim Delaney as the memory of Maggie McConnell—are mere contractual narrative obligations.) The three worlds presented: Dickinson, TX, the International Space Station, and the surface of Mars, are NASA suburbs, and all their inhabitants are PSA-worthy automatons.

Opening with a fluid, perimeter-surveying long take that softly coos “De Palma” as it telegraphs the personalities of the film’s protagonists and their relations to one another (is it a spoiler to note Sinise doesn’t appear until after a cut?) over a red-white-and-blue coordinated BBQ—also possibly the first scene ever in a space travel movie scored to the jubilant stylings of zydeco—Mission to Mars proceeds with little in the way of galactic fireworks or Lucas’s cosmic C-SPAN lulls. The seemingly requisite molar-rattling, Dolby fodder—take-offs, crash landings, and other explosion varietals—are sparingly called upon. The general mood is one of jet-lagged somnabulance, as perfectly embodied in Sinise’s permafrozen features, accompanied by a chloroform intonation that makes him a stoned Buzz Lightyear to Robbins’s predictably wooden Woody.

The title Mission to Mars refers to two separate excursions to the red planet: an exploratory prospect, led by Cheadle, that turns tragic due to a mysterious, growling vortex and, in response, a rescue journey carried out by Sinise and company. Additionally, both Mission to Mars the 2000 film-product and the film’s 2020-set narrative, take place during election years, with Cheadle’s original journey boasting a flag-planting insert worthy of a campaign ad. The Robbins-piloted recovery occurs roughly a year later, presumably with the newly installed president as a backdrop. So as to not disturb the film’s spacecrafted populism, this tidbit goes entirely unmentioned.

If Independence Day’s White House-demolishing alien attack was 1996’s warning shot against a second term for Bill Clinton, then Mission to Mars is that second term’s astral-fantastic rubble film. It foretells a benevolent universe where acts of violence are merely misunderstood forms of self-protection. The film’s gooey moral underpinning—voiced from beyond the grave by Mrs. McDonnell—of “to stand in a new world and look beyond it to the next one” echoes the vague optimism of the Clinton/Gore “bridge to the future” and prophesizes W.’s end-times babble. Mission to Mars imagines a world where a sleeper cell implies Martian DNA, not third-world disenfranchisement and dirty bombs.

The film’s culmination is founded on, literally, touching the other (“They’re us!”) and the promise of traversing a primordial split. Other De Palma tropes, such as mediation and the visualization of sound, also recur subtly. Given the genre’s opportunity for countless moving-image entities, De Palma plays with ubiquitous computer monitors, video feeds, a hovering solar system diorama, even paid-to-place Dr. Pepper and M&M are transformed into mediums in gravity-free atmospheres. Meanwhile, the “reading” of sound waves, as De Palma’s scientists hunch over a PC screen and analyze the minutia of an audio signal, provides the crucial key which allows them to hack the equivalent of an extra-terrestrial car alarm.

A stiff text cast in plastic magnificence, Mission to Mars has an almost Cronenbergian remove that loudly proclaims its own movieness. Its simulation of low-level “maximized junk phantasia” (to borrow from Michael Atkinson, though here used to speak of the more sober realm of mini rovers and re-supply modules instead of comic book gadgets) and its unfulfilling denouement find no magic in the stars. Its last shot shaping the cosmos into a faint tracing of Saul Bass’s Vertigo spiral, Mission to Mars proves the invocation of phantoms is a doomed pursuit best carried out by the aesthetically obsessed.