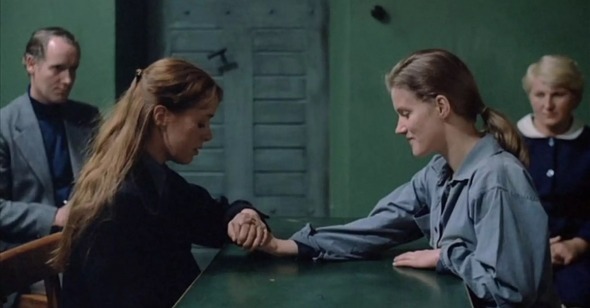 Margarethe von Trotta’s Marianne and Juliane, also known as The German Sisters—or by its onscreen title Die bleierne Zeit (literally “The Leaden Time”)—is a film that looks backward. This is clear from its opening sequence, set at an indeterminate moment in the narrative. The camera peers down on a street corner from behind a closed window, the sound of someone pacing audible on the soundtrack, then pulls up and back to reveal Juliane (Jutta Lampe). She pauses at a shelf lined with binders labeled by year, spanning the decade of the seventies, and grabs one from 1978. After looking at it and making notes, she turns to consider a black-and-white photo of her sister Marianne (Barbara Sukowa). The camera zooms into the image, ending this ambiguous prologue and launching the narrative, which is framed as a flashback. As if to punctuate the point, the next shot looks back on a receding road from the point-of-view of a character staring through the rear window of a driving car. Later we’ll get more flashbacks to the sisters’ childhood, suggesting a structure that embeds memory within memory, linking the eighties to the seventies to postwar West Germany in continual turns backward.

This retrospective approach suits the subject of the movie itself. Juliane is a feminist journalist and activist whose younger sister has grown from dutiful child to radical left terrorist. Loosely based on Gudrun Ensslin of the Baader-Meinhof Gang or Red Army Faction, Marianne deplores her sister’s seemingly milquetoast brand of resistance, which she sees as hypocritical in its complacent acceptance of oppression and exploitation. Her alternative is to “throw bombs,” as some characters describe it, which we presume to be a reference to literal terrorism. Yet von Trotta steers clear of dramatizing Marianne’s political violence, instead depicting her activities in fragmentary, elliptical sequences and terse lines of dialogue. In 1981, audiences would have understood the unnamed reference to Baader-Meinhof more directly than a viewer today. At the time, though, the terrorist left of the late sixties and seventies was already fading as a dominant cultural and political idea. Later in the film after Marianne’s death by apparent suicide in prison, Juliane embarks on an obsessive investigation to uncover a more sinister conspiracy. When she makes her case late in the film at a moment that speaks to the era of the movie’s production and release, she’s dismissed: “Your sister, the whole movement, they’re strictly seventies.”

One might also fairly make this statement about the New German Cinema, the whole movement. To be sure, the famed cinematic renaissance to which von Trotta’s film belongs began much earlier than the decade with which it’s associated, with the Oberhausen Manifesto in 1962, which, in declaring “conventional film is dead” rejected the postwar German film industry and paved the way for a new independent cinema that would “speak a new language of film.” But we tend to think of New German Cinema in terms of the 1970s output of Fassbinder, Wenders, Herzog, Schlöndorff, and their ilk. Indeed, the movement is so associated with the creative apotheoses of these “great men” that it is often seen as concluding with the death of its “greatest” man, Rainer Werner Fassbinder, in 1982.

If we accept the “great man” narrative of New German Cinema that ends with the demise of its most dominant figure, Marianne and Juliane does indeed come at the movement’s tail end, and in this regard it functions as a denouement. It operates in a register similar to the movies that came before it: like the films most typical of the movement, it excavates, with intellectual rigor and emotional complexity, the legacy of Nazism and the troubling ambivalence exemplified by the “economic miracle” and bourgeois capitalist culture of West Germany in the generation after it was gripped by fascism. The casting of Sukowa (the Mieze of Fassbinder’s Berlin Alexanderplatz) and, as Juliane’s ineffectual boyfriend, Rüdiger Vogler (the star of Wenders’s indispensable Alice in the Cities and Kings of the Road) is pregnant with meaning. Additionally, when she made The Lost Honor of Katharine Blum, her directorial debut, von Trotta was still married to her co-director Volker Schlöndorff. There is no doubt Marianne and Juliane is something of a throwback, sitting alongside the 1970s masterpieces of German cinema even though it does so at a remove and with a retrospective posture.

Still, the “great man” narrative of New German Cinema has been contested for decades, in part because feminist critics and scholars have called into question the tendency to elide the many accomplished female directors of the era like Helma Sanders-Brahms and Ulrike Ottinger. In this context, The German Sisters stands out as damning evidence. Despite winning the Golden Lion at the Venice Film Festival, the film has been largely unseeable for decades and is unforgivably obscure even today. One cannot attribute this lapse solely to confusion over its proper title: on its cinematic qualities alone, Marianne and Juliane (or The German Sisters) certainly meritsconsideration as one of the essential films of the eighties, whether or not we concur with Ingmar Bergman’s assessment that it was one of the ten best movies ever made.

If Fassbinder’s death is one of the closing moments of New German Cinema, Marianne and Juliane is another, and it serves as a significantly feminine capstone. The first time we see the sisters meet on screen, it’s at a museum. Juliane’s journey to the meeting takes her down an outdoor path lined with statues of imperious male figures, which von Trotta’s camera considers in a low angle tracking shot that emphasizes the conceptual shadow patriarchy casts on this distinctly feminine and feminist narrative. The sisters’ imposing and domineering religious father is the bogeyman who haunts the flashbacks to their childhood, but he’s more symbol than character. Meanwhile, Juliane’s ineffectual boyfriend Wolfgang (Vogler) proves so utterly disposable that she casts him aside after more than a decade together when he begs her to stop obsessing over her sister’s death. The movie is almost completely uninterested in men. In a flashback that comes midway through the film, a teenage Marianne cajoles her sister into doing a Vienna Waltz solo at a parent/child dance. The other attendees stare at her dumbfounded, but their mother stands and slowly smiles as she watches her fearless daughter waltzing by herself.

It might be tempting to read irony into the depiction of the women as children and adolescents. Initially, it may seem as though Juliane’s headstrong willfulness and Marianne’s more compliant nature stand at odds with the choices they makeas adults. Such a reading ignores the deep political engagement that drives Juliane. Shortly after we meet her, von Trotta follows her during an afternoon where she protests the “Anti-abortion Act.” Juliane’s impassioned speech about abortion rights plays over a montage of her distributing fliers and securing signatures for a petition. Far from being apolitical, Juliane instead offers to her sister a contrasting model for political activism, one that is deeply personal and that operates within Western liberal democratic structures, rather than seeking to dismantle them. And her rejection of motherhood is central to her own sense of liberation. In this regard, it’s profoundly unsettling that the end result of Marianne’s revolutionary crusade is to leave her sister as the de facto single parent to her orphaned son, Jan.

Remarkably, Marianne and Juliane sketches a believable affection between the two women, even while dramatizing how each sees the other as something of a hypocrite. Marianne is more direct than her sister in decrying what she perceives as hypocrisy, arguing that her feminist activism capitulates to capitalist and imperialist oppression. But Juliane, for her part, wonders why her sister chose to marry and have a child, questioning the values that underlie those decisions. The dialectic between the two characters aptly captures the internal schisms of the 1970s western left, but von Trotta never reduces the women or their relationship to an intellectual exercise. This is a film of ideas with a wounded human heart.

The loss of her sister becomes a scarring trauma that Juliane carries with her, long after West Germany has left the Baader-Meinhof Gang behind. This is also true for Jan: in a shocking moment near the end of the film, the child is badly burned after being set on fire by someone who learns of his mother’s identity andcomes to stay with Juliane. In the best of the New German Cinema films, the past—whether fascism, genocide, or the postwar economic miracle—is more than prologue; it continues in the present, in ways both hidden and obvious. So it is in Marianne and Juliane. The movie ends, brilliantly, with a conversation between Juliane and Jan after he destroys a photograph of his mother. Jan asks his aunt to tell him “everything” about his mother. She promises to tell him all she knows, and he demands, “Begin now.” Jan’s insistence is compelling and legible. After all, he still wears the scars from his attack, an indirect consequence of the decisions his mother made a decade earlier. Trauma isn’t something that ends, nor is it simply inherited or passed down. It is reinterpreted, reexperienced, and remade in each new generation. If the New German Cinema had a central thesis, it may be this: history is never past.