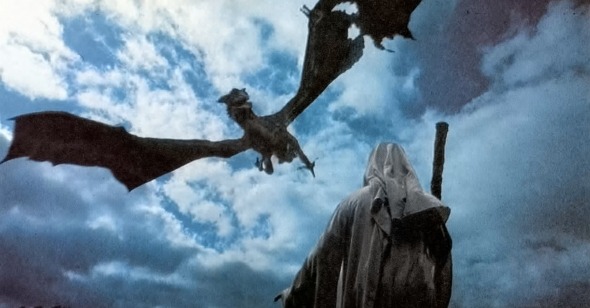 When you think of visual effects in 1980s sci-fi and fantasy, chances are you’re thinking of the work of Phil Tippett—or if not him, then something Industrial Light & Magic (ILM) had a hand in. Though the craft of stop-motion is now considered constantly on the brink of extinction, it was previously on the cutting edge of VFX tech, and Tippett’s studio—known for its work in creating props and special effects on Jurassic Park, Robocop, Starship Troopers, and more—helped bring it into the modern era. Today stop-motion is considered a separate medium unto itself, despite a lot of its practitioners likening it to working in live-action, but on a smaller scale.

There’s a specific type of stop-motion that feels tied to a moment in the early to mid ’80s, and that’s Tippett’s patented “go-motion,” a method co-developed by Tippett Studios and ILM that brought various creatures and childhood terrors to life. Go-motion is a descendent of stop-motion that factors in the simulation of motion blur to better situate the effects in the real world, though the technique was only used for relatively brief sequences and as supplements to other special effects. It feels like a technique that belongs to ’80s fantasy films, in part because of how it would b equickly overtaken by the birth of other cinema technology, notably intersecting with the birth of digital VFX and the use of computers, which go-motion used for the recording of movement.

Though the name is the antithesis of stop-motion, the two practices are branches from the same tree rather than opposites—the “go” part stemming from go-motion’s emphasis on creating motion blur. Regular stop-motion has its issues in effects use because of a distinct separation that remains between its style of movement and everything else in the film—a “staccato” motion perceptible because the observed object was still when shot, while other moving objects in films will be in motion when the camera shutter is open. Other, more crude methods of simulating motion blur existed—like smearing Vaseline on the lens—but go-motion was created as a solution. The use of rod puppets diverges from traditional stop-motion puppets, as the rods keep the puppet in motion while the camera is rolling, rather than artists moving digits by hand. The method was first developed specifically for The Empire Strikes Back, for the “tauntaun” creatures when observed in wide shots.

Go-motion itself was but a small part of the films it was deployed in, used to complement other techniques and props. It makes perfect sense that such puppets would be deployed as a special effect in fantasy films that flirt with the macabre, go-motion becoming a sort of necromancy itself. This involved, handcrafted technique was mostly used on middling ’80s blockbuster fare, a relatively small subset of fantasy films long since relegated to a niche childhood memory, one of the most prominent, early examples of which was the now largely forgotten Dragonslayer.

Directed by Matthew Robbins, Dragonslayer is a somewhat corny medieval fantasy, in which the rot at the head of the feudal system isas great a problem as the mythical beast that requires slaying. The kingdom’s campaign to find someone to slay the beast reveals itself as the king’s attempt to maintain control over the populace, as routine human sacrifices are made via lottery—the lives of peasants paid to spare the rich. A young and ambitious sorcerer, Galen (Peter MacNicol)—who has more than a little Luke Skywalker in his cadence and attitude—seeks to fill the shoes of his recently deceased teacher, who was meant to embark on a quest to help villagers kill an aging, “pitiful and spiteful” dragon plaguing their lands. Daughters are sacrificed (notably not sons) as part of a ballot system that the rich can buy themselves out of. Dragonslayer proves an ironic title—the king rewarded for the hard-won deeds of Galen and Valerian, and Christian power consolidated.

The look of the film turns surprisingly grotesque despite its fanciful call to adventure and PG rating, such as in a sequence where large puppets of hideous dragon babies gnaw off a character’s foot. It’s all part of the film’s lived-in, visceral texture, best represented in the design of the dragon that has to be slain. The “unclean beast!”—named Vermithrax—is so old that it now lives a wretched life, so miserable in its prolonged agony that it has become spiteful and violent. This effects technique, bringing the inanimate to life, feels appropriate for this character then: as it would with the malfunctioning ED-209 robot which fell down the stairs in Robocop (1987), also animated by Tippett Studio.

The dragon remains mostly offscreen until the film’s halfway point, obscured in smoke and shadow even when it sticks its head out of its cave. Go-motion was used to depict the dragon flying over and terrorizing villages, scenes which remain tangible despite some compositing that is now showing its age. But that agedness is in sync with the nature of the creature itself. The dragon is surprisingly seamless in its presentation, its tactile presence given weight and dramatic wonder—expressive in its movements and contortions as it mourns the death of its babies or tries to wrest Galen’s spear from its neck. The shambling Go-motion movements feel like part of the aged creature’s character, as well as part of our physical reality. The effects have their visual limitations, of course, but these add character, a fair trade when compared to the technically brilliant VFX rendering of otherwise soulless work that would come to define so much fantasy filmmaking.

The film’s savagery feels somewhat distant from go-motion’s other best-known features. In Barry Levinson’s Young Sherlock Holmes (1985)—a sort of nexus point for many developing VFX techniques of the time—a murderer is using a hallucinogen to provoke the deaths of various old and wealthy Londoners, and each vision brings with it a different kind of effect. The film’s flying harpy sequence—in which little gargoyles seemingly spring to life and attack the ex-headmaster of Holmes and Watson’s school—was credited to effects cameraman Michael Owens and go-motion supervisor Harry Walton as well as various puppeteers, Notably, Young Sherlock Holmes also contains perhaps the first fully CGI character in the form of the Glass Man, a stained-glass window come to life, the sequence composed by a young Pixar Computer Animation Group.

The Eddie Murphy-starring fantasy adventure film The Golden Child (1986) shows a similar breadth of strange imaginary creatures, though cruder than the decaying majesty of the dragon. There’s a Pepsi can that unfurls arms and legs and starts dancing, but the main event is a go-motion demon that appears at the end of the movie (pitted against a similarly lifeless Eddie Murphy, who sleepwalks through the script.) Credited to Tippett as “demon supervisor” as well as the aforementioned Walton and Tom St. Amand on go-motion supervision, the demon illustrates the laboriousness of the effect, something that would eventually lead studios to leave the method behind, perhaps refusing to hire multiple crews for the fabricating, rigging, and animating of a single monster—although contemporary digital VFX crews tend to run much larger. (As a side note, it’s too bad that Young Sherlock Holmes and The Golden Child both peddle deeply racist stereotypes alongside their portrayals of mysticism, as more layers to the mystery are revealed—another product of Hollywood as much as go-motion itself, but unfortunately with a longer shelf life in the industry.)

Despite all its strange and curiously grotesque creations, go-motion was sadly short-lived, it became more or less extinct with Tippett Studio’s recruitment to work on Jurassic Park (1993). Go-motion had been the intended method for that film before the advent of CG techniques caught Steven Spielberg’s eye, Tippett’s go-motion tests acting as models for computer animation instead. The relatively brief history of go-motion can feel like something of a “what if?”, inspiring imaginings about what could have happened if the method had progressed further and what effects work might look like now. Practicality won out in one sense—the method eventually went the way of the dinosaur as it was slow and incredibly laborious, and motion blur in stop-motion can now be simulated in post. Curiosity about a new method of storytelling can so often be supplanted by a desire for “practicality,” mostly meaning sequences that are interchangeable when it comes to film studios’ frequently exploitative relationships with contemporary VFX houses. Such fickleness as well as unreasonable demands have recently (once again) demonstrated that the desire for practicality can turn into a compression of the VFX pipeline, causing brutal crunch for its workers, as recently demonstrated in stories from behind the scenes of movies from Marvel Studios. (This is, of course, not to say that digital VFX and animation as a craft is uniformly poisonous, to do so would be luddite and also wrong.)

In any case it’s a method that now remains frozen in a specific window of cinematic history—not dated, exactly, but tied to a certain moment. However, while the techniques that produced Dragonslayer may not be replicated today, their influence has carried forward, as in later films such as Reign of Fire (2002), or in Phil Tippett’s own Mad God (2021), a visceral stop-motion feature film he assembled over a course of 30 years. This is something of a comfort, perhaps, now that go-motion is itself inanimate. At the very least, its charming and frequently grotesque creations remain enshrined in the childhood memory of multiple generations.