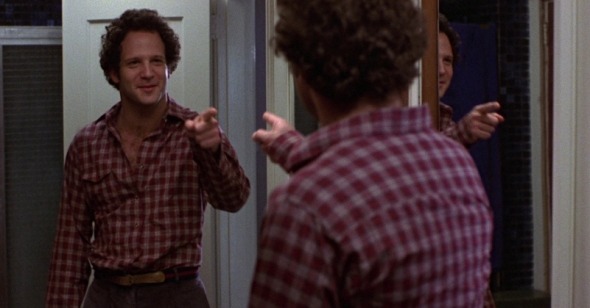 In 1979, Albert Brooks capped off the first phase of his career with his debut feature film Real Life, a parody of the PBS documentary series An American Family in which Brooks, playing a manic version of himself, moves in with and films a dysfunctional American family and tears them asunder with his control-freak nature. It’s a natural culmination of his ’70s comic persona, primarily developed on late-night talk shows and six short films created for the first season of Saturday Night Live, of a knowing industry huckster. The son of actress Thelma Leeds and comic Harry Einstein, Brooks was so well versed in show business, particularly the world of comedy, that his instinct was towards deconstruction. He packs his second comedy record, A Star Is Bought, with rapid-fire satirical takes on radio tropes, ending with a ten-minute bit in which Brooks stars as a Jack Benny-like figure trying to put on a WWII-era radio program. A 1973 Tonight Show set features Brooks doing three-and-a-half minutes on “running out of material.” In his short film “Mid-Season Replacement Shows,” Brooks parodies various television genres, including medical procedurals and fish-out-of-water dramas. In a send-up of Three’s Company, “The Three of Us,” Brooks’s character desperately tries to convince his wife to have a threesome with her best friend who’s living with them. It ends with the two women frantically fleeing from Brooks and his lustful pleas.

Though a broad parody, “The Three of Us” neatly presages Brooks’s darkest and best feature 1981’s Modern Romance, which skewers the behavior and mentality of the paranoid heterosexual male to an uncomfortable degree. The plot is bare but thematically rich: film editor Robert (Brooks) keeps breaking up and getting back together with his girlfriend Mary (Kathryn Harrold, an excellent reactive foil to Brooks’s various antics). He’s unhappy when they’re apart, incapable of moving on from his obsession, and he’s jealous and insecure when they’re together. The film begins with Robert splitting with Mary for the umpteenth time and ends with Mary accepting his desperate, doomed marriage proposal, punctuated by a closing title card implying that the awful cycle will continue for the rest of their lives.

An archetypal “toxic boyfriend,” to use the insufficient parlance of our times, Robert sports so many red flags that he resembles a monochromatic picnic blanket more than a person. (The classic Onion headline “Romantic-Comedy Behavior Gets Real-Life Man Arrested” could easily be written about him.) The brilliance of Modern Romance lies in how Brooks, as the film’s co-writer, conflates the comedic and horrific implications of its romantic premise until they are indistinguishable from one another. The film is funny because it’s kind of disturbing, not despite that fact. However relatable Robert might be for a certain kind of sensitive masculine viewer, especially in the first half when he’s taking quaaludes and listening to records and suffering from romantic despair entirely of his own making, he also exhibits objectively self-sabotaging, bullying behavior.

As director, Brooks follows Charlie Chaplin’s famous maxim that life is tragedy in close-up but comedy in a long shot to a tee: he captures Robert’s discomfiting actions, both alone and with Mary, in their full messy glory from an observational distance, subtly communicating that his comportment is a product of both his environment and his singular mania. He deploys anxiously long takes so the audience lingers on the unpleasantness just long enough for embarrassment to settle in. Modern Romance was part of a wave of post-Annie Hall (1977) neurotic cinema that had made its way into American movie houses,with a sharp focus on depicting masculine existential crises. My Dinner with Andre (also 1981), a dialogue between two artists contrasting practical human comfort and spiritual quests, would be released seven months after Brooks’s film.The quintessential ensemble male talkie about adolescent fears and desires, Diner (1982), would come out a year later.

Brooks’s comedy and persona, like those of all unique stylists, are not everyone’s cup of tea. You either gel with his flamboyant physicality and sometimes meek, frequently exasperated, and yet always forceful delivery, or you don’t. But unlike, say, his road trip comedy Lost in America (1985) or his touching romantic fantasy Defending Your Life (1991), Modern Romance features Brooks at his least likable and most acerbic. As Robert, Brooks weaponizes male sensitivity until it evolves into plain old torment. He loves Mary, but doesn’t trust her or himself, so he crashes her work dinners because he’s worried about male attention, browbeats her about expensive phone calls possibly to other men from out state, and criticizes her wardrobe. (“Honey, there’s people that only rape. That’s all they do. They’re out there,” he yells after Mary as she leaves for work wearing a particularly tight number.) Robert is technically a caricature of the prototypical “nice guy,” but Brooks doesn’t render him so broad that he becomes a cartoon. Modern Romance works precisely because Robert is a grounded, recognizable figure. On a 1981 episode of Sneak Previews, Roger Ebert argues that one of Modern Romance’s best features is how it skewers the contemporary “sincere” generation. “All of the things we say to each other in order to be honest and to reveal ourselves, to be warm and vulnerable…By the time you get done with this movie, you don’t trust any of those things,” he notes perceptively. Today, in an age of entertainment that often patronizingly models positive male behavior in a precious "afterschool special" sort of way, Modern Romance remains potent precisely because it spotlights the opposite without any moral handholding. Brooks confidently presents it without commentary.

Modern Romance’s most effective irony involves the gap between Robert’s professional competency and personal ineptitude. Throughout the film, Robert and his editing partner Jay (Bruno Kirby) are working on an obviously terrible Star Wars-esque science fiction film, directed by the pushy, indecisive David (James L. Brooks, in a performance so funny and perfectly realized that it makes you wonder what else he could have done as an actor.) Robert and Jay field David’s increasingly absurd whims and begrudgingly accept his lack of perspective on his own film all while turning in a seemingly impressive editing job. The scenes in the editing bay or those between Albert and James are some of the funniest in the film and play to Brooks’s insider strengths, but on first glance they might seem like awkward digressions from the main relationship drama. That Brooks never hangs a lampshade on Robert’s inability to edit his own behavior in his relationship feels downright miraculous. It’s just an unrealized epiphany, floating so far out of Robert’s reach that it might as well be above the clouds.

The 1980s kicked off Brooks’s “everyman” period, when he channeled his various neuroses and complexes into a more realistic framework. The apotheosis of this is probably his turn in Broadcast News as the lovesick, bristly reporter Aaron, the nebbish counterpart to the classical himbo anchorman Tom (William Hurt). Brooks gets all the film’s most memorable lines and zingers, including his famous speech to Jane (Holly Hunter) about Tom being the Devil, someone who insidiously worms his way into rarefied halls of power and lowers quality standards. (“And he'll talk about all of us really being salesmen,” Brooks sneers in a way that still gives me chills.) But it's telling that Aaron shares some qualities with Robert, specifically an embittered frustration that the women in his life won’t simply contort themselves to fit his needs. Aaron’s doting, loyal friendship with Jane turns sour the minute she tells him that she’s interested in Tom in a scene that plays much differently in an era with heightened sensitivity around toxic masculinity. Obviously Aaron is an infinitely more sympathetic figure than Robert, but the thread between them is stronger than at first glance.

Modern Romance might represent a break from Brooks’s whiz kid showman image: it both maintains his deconstructionist impulses and owes debts to ’70s American film. It was released during a unique year in American cinema where the last remnants of gritty, downer dramas were seemingly held over from the previous decade. Modern Romance might not neatly fit that mold in the same way as other 1981 films like Thief and Cutter’s Way, but it certainly belongs in the conversation. Brooks takes all the genre trappings of the romantic comedy and presents them in an off-beat, off-kilter manner to reveal the rot at the heart of imbalanced heterosexual relationships. The film never presents itself as a “state of the union”; instead, it’s unassuming and outwardly gentle. It’s only at the very end, when we hear Joe Cocker’s bluesy warble singing “You Are So Beautiful” over what’s clearly a troubling romantic union that the tragic core in Brooks’s comedy finally reveals itself.