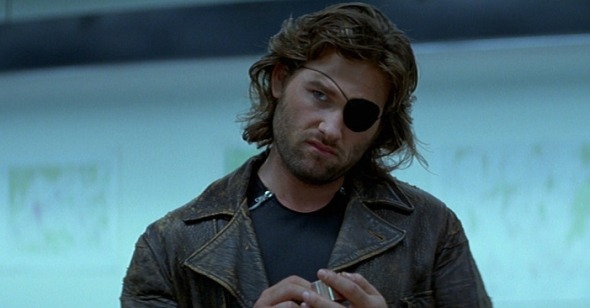 The Western Front
Genevieve Yue on Escape from New York

John Carpenter’s Escape from New York is a western in disguise. Though the film is outwardly a dystopian thriller, its story of an outlaw hero sent into hostile territory to retrieve a hostage is equal parts The Searchers (1956) and Stagecoach (1939). But the film is more than a clever twist on a genre. Made at the outset of Ronald Reagan’s presidency, when the neoliberal restructuring of public life was just underway, the film also projects a nightmare vision of a near future (1997), one in which the island of Manhattan has been turned into a maximum-security prison. Neoliberalism was the target; the western was the weapon. Like the sunglasses in Carpenter’s They Live (1988), through which the messages of ideology become bluntly visible, the western in Escape from New York focuses and clarifies the contradictions of a new and pernicious political reality.

There have been many films to depict New York as a wilderness, but Carpenter’s version pointedly resembles the western genre’s contested frontier. In this prison, the inmates have been left to fend for themselves. The weak appease or avoid the violent—cannibals, pro-wrestlers, and, nastiest of all, the self-proclaimed “Duke of New York” (Isaac Hayes), who rides around, always very slowly, in a Cadillac Fleetwood with chandeliers for headlights. This is the landscape into which the president (Donald Pleasence) has landed after leftist revolutionaries hijacked Air Force One, prompting him to eject in a pod shaped like a large red egg. The only person tougher than the Duke is the notorious outlaw Snake Plissken (Kurt Russell), who is sent in to rescue the president so that he can deliver a crucial television address. Snake is an antihero in the style of John Wayne, a crabby loner who ends up saving the day, though not because he wants to. Snake even wears an eyepatch like the one Wayne sported in True Grit (1969). There’s Clint Eastwood, too, in Russell’s hissed lines, and also like Eastwood he is simultaneously hot and mean. Escape from New York’s western lineage is confirmed in the supporting cast: Hauk, the steely warden who sends Snake in, is played by veteran spaghetti western actor Lee Van Cleef, and boisterous Cabbie, who provides the car, is played by Ernest Borgnine. Harry Dean Stanton wasn’t exactly a western actor, but as the petulant poet Brain, he’s worth mentioning here all the same.

One of the film’s running gags is how, despite Snake’s attempts to be stealthy, everyone seems to recognize him. “I thought you were dead”: the line was previously reserved for Wayne in Big Jake (1971), and here it’s said so frequently it becomes a kind of formal device, marking the arrival of a new stage in Snake’s quest. The western, too, once pronounced dead, is back. Westerns always seem to spring back from near extinction, with neo-westerns and revisionist westerns, space westerns (like Outland, another 1981 film), and genre mixes like the sci-fi Westworld (1973) or western horror films like Carpenter’s Vampires (1998), and ongoing remakes and sequels (including 1996’s regrettable Escape from L.A.). The western’s nostalgia for a “simpler time”—usually of unfettered white masculinity—may look hopelessly outdated, but perhaps that’s how it’s always been. Popularized long after the West was won, the western’s mythos of rugged gunslingers, brute violence, and the promise of an Edenic frontier has endured, no doubt because it taps into the settler aggression on which this nation was founded and continues to legitimate itself. What other genre is better suited to such bitter tenacity?

The reappearance of that mythos here indicates something different, more sinister. In Escape from New York, the central showdown of the western, the taming of the wilderness by the arrival of civilization, never really happened. Or, worse, the political order managed to recreate the conditions of the western, and it is anything but romantic. Within the prison walls, the state has completely abandoned its people. There’s mention of a weekly food drop in Central Park, but no other indication of even basic services. The lights have been turned off, a situation that recalls what happens when the electricity bill goes unpaid, or when, in other words, the poor are punished for being poor. Escape from New York pushes the nostalgia inherent in the western to its hyperbolic end, restoring the prelapsarian wild, which is, in fact, a smoldering ruin. This was not just a fantasy: much of the film was shot in a burned-out section of St. Louis that had for years been left in disrepair after a 1976 fire. It was, as Carpenter described in a 1994 interview, a “shell, an empty city with a lot of bonfires and rubble in the street.”

Escape from New York shows how the western is the beating heart of neoliberalism. This policy, ushered in by the administrations of Margaret Thatcher and Ronald Reagan, began the privatization of the public sphere. Under the banner of deregulation and the “free market,” governments slashed budgets for health care, infrastructure, education, and housing. Previously public services were turned over to private interests so that many eroded, if not entirely disappeared. (The opposite has been true for policing and military spending, which increased in the eighties and after. This is reflected in the film, too, where the prison’s walled perimeter bulldozes through the middle of Staten Island!) Neoliberalism finds its Platonic ideal in the western, another place where the state is functionally meaningless and hostile to softie “welfare bums,” as Reagan once described them. If neoliberalism is the skeleton, the flesh is supplied by the myths and lies inherent in the western.

Carpenter has said that the president’s abduction, first by the Air Force One hijackers, then by the Duke, is a citation of the Iran hostage crisis, a tense 444 days in which Iranian revolutionaries held more than 50 American citizens captive at the U.S. Embassy in Tehran. The U.S. government failed at least two rescue attempts, and the hostages were released only minutes after Reagan was inaugurated. The result was a windfall for Reagan, a facsimile cowboy who had ridden in to save the day after the multiple defeats of his predecessor Jimmy Carter. His popularity surged, as did conspiracy theories about backroom deals trading American hostages for weapons to be used in the Iran-Iraq War and elsewhere (these would later be confirmed with the revelations of the Iran-Contra affair). Reagan’s shady international dealings seemed to confirm that the world worked according to the cynical logic of the western, where the calculating and brutish rise to the top, and everyone else is held captive to their whims.

Escape from New York’s president is vain and useless, and subject to larger, invisible forces. Passed from one group to another, he is little more than a prop, and a degraded one at that, as he is multiply humiliated by the Duke, who dresses him in a blonde wig and throws knives at him. Enter Snake. The world is filled with crooks and mercenaries, and Snake’s extreme cynicism—he doesn’t even know who the president is—becomes a kind of accidental virtue.

Outwardly, Snake only cares for his own survival, but in carrying out his mission he manages to rescue the dignity of those who have helped him. Something apparently shifts in him. After delivering the president to his handlers, he confronts him with the many lives that were lost in rescuing him. “I just wondered how you felt about it,” he says evenly, his head cocked. The president gazes at himself in a comically small hand mirror as he is shaved. “This nation appreciates their sacrifice,” he says airily. Snake takes a drag of his cigarette, then flicks it toward the president. He walks away, a slight limp in his swagger. The president addresses the nation on air, dropping into a tape deck a cassette that will, ostensibly, ensure world peace. His smug expression shifts to one of horror as the idiotic strains of American Bandstand plays. He realizes the tape, which had previously been in a suitcase handcuffed to the president’s wrist, has been swapped during his ordeal. In a parallel cut, Snake lights another cigarette and pulls the magnetic ribbon from the cassette he was supposed to deliver. It might be too much of a stretch to say that Snake has developed a political consciousness, but the gesture is ambiguous enough to allow for it. In any case, even petty revenge has its uses. Snake breaks out into a tiny grin as the order sustaining this miserable world presumably collapses. Perhaps something better will come of it.

There was a moment during the early days of the pandemic when it seemed that most New Yorkers were fleeing the city, at least the ones who could afford to leave. I remember the empty streets, the quiet punctuated by ambulance wails. I remember also the grim determination to stay, and I recognized something of that while rewatching Escape from New York. Amid the chaos, a few have decided to put on a ramshackle cabaret in a repurposed movie theater. It’s nothing fancy—there’s a body being stripped in the lobby, and the concierge is slumped over the ticket counter—but Cabbie’s having a great time. He bops along to “Everyone’s Coming to New York,” a song Carpenter wrote for the film: “This is hell, this is fate, but now this is your world and it’s great!” It’s dangerous to be south of 42nd Street at night, when the crazies are out, but Cabbie’s willing to risk it, all for love of a good show. He watches the dancers clumsily do-si-do with a wondrous, toothy grin. He probably won’t survive past the evening, but it will have been worth it.