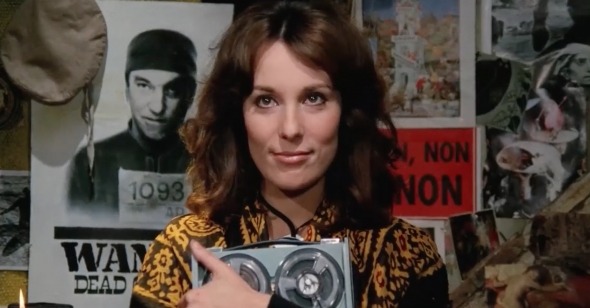 Play Back
Caitlin Quinlan on A Very Curious Girl

About halfway through Nelly Kaplan’s A Very Curious Girl, André, generous benefactor of the film’s protagonist, Marie, a sex worker, says of a battery-operated tape recorder found in a houseware store: “It freezes sounds and keeps them.” In response, Marie scoffs, “Are you kidding?” But then André demonstrates the machine’s powers. A look of juvenile cheekiness spreads across Marie’s face, settling into a cunning stare as she raises a finger to her chin inquisitively. A curious object for a curious girl.

Kaplan’s 1969 debut feature is all about objects and the manipulation of their use for personal gain. As an often-objectified woman herself, Marie understands this concept better than any of the residents in her provincial town of Tellier. The villagers harbor a prejudiced hatred for her and her mother, believed to be of Romani origin, and so the two women live on the outskirts of Tellier in a run-down shack in the woods. It is a place devoid of objects until Marie’s mother’s death in a hit-and-run causes a fundamental shift in Marie’s outlook. Where once the townspeople could use Marie for their sexual pleasure whenever they liked, including her lesbian employer at a local farm, now Marie demands payment. Thanks to her clients’ sexual desperation, she uses her newfound wealth to develop and modernize her home. Now she has running water and electricity, but her desires go further than basic utilities; she wants anything and everything, meaningless toys and trinkets, objects with no purpose other than to reflect her ability to own them. Kaplan plays with frivolity here, reclaiming it as an emancipatory, feminine pursuit rather than something to be condemned. As Marie’s house gradually fills with objects, her power intensifies.

Demanding payment offers an opportunity to manipulate those who have abused her for so long, revenge against the people who did nothing to help her dying mother, and, in particular, a chance to simply make a mockery of her bigoted, selfish neighbors. Kaplan’s work revels in its joyful farce—“insolence raised to the status of art” was friend Pablo Picasso’s take on the film. Marie is a remarkable protagonist even by today’s supposedly more progressive standards—a sex worker who faces no tragedy (aside from her mother’s death) and none of the negative consequences that might have befallen her in a different film. In an interview with Another Gaze journal in 2016, Kaplan reveals that a film censor told her to “film me a version where she’s killed at the end, and your film will be authorized.” She, of course, refused.

Kaplan’s film is incredibly funny throughout. The men of Tellier—farmers, grocers, shopkeepers—are undeniably absurd, taking turns to run to Marie whenever they can despite all expressing their outrage at her business during town meetings. They swear she must not be allowed to raise her prices, yet all cough up the 40 francs required when, after a few minutes, they can no longer resist. The film is breezy and carefree in a manner not often seen in narratives centered around women’s power. Not only does Marie never fail, there is never the sense that she even might. Kaplan is not interested in suspense; from the beginning, it is joyfully clear there is nowhere for Marie to go but up.

The only consequences of Marie’s total domination of the town’s male population is their increasing loss of wealth and Marie’s steady gain. Her once barren cabin becomes a hub of sheer stuff, with multi-colored fabrics draping the walls, shiny plastic tubes hanging from the ceiling to supply water to her new garishly pink bathtub, bulbs of garlic and chains of sausages strung up nearby, and elaborately decorated storage chests filled with all sorts of ephemera. But one object in particular, the tape recorder, stands apart from the others. It functions as both plot device and symbol—of burgeoning technological modernity and female power, working in tandem in Marie’s hands to reject the parochial traditions of Tellier—and will come to define the rest of Kaplan’s film.

Recording using magnetic tape was developed in Germany in the 1930s, but it wasn’t until after the Second World War that other countries could harness this new technology. Jack Mullin, a major in the U.S. Army Signal Corps, was one of many exploring radio and communications systems in Germany. Surprised that he was hearing an orchestra on the radio in the early hours of the morning, in what couldn’t possibly be a live recording, he carried out further research and eventually discovered the “Magnetophon,” a reel-to-reel tape recorder, at a Frankfurt radio station. The ability to record a moment in time, to “freeze” sound as André says, at the level of quality and ease offered by magnetic tape was an immediately attractive prospect. As Mullin discovered, the clarity of sound and reduced background noise made it nearly impossible to tell the difference between a radio broadcast of a live performance and a tape recording.

Mullin took a Magnetophon home to the U.S., where Bing Crosby quickly took up the opportunity to avoid live performances and record his vocals for future use. The first broadcast of such a recording took place in October 1947. The ability to do this suggests a kind of supremacy, that someone had finally solved the dilemma of needing to be in two places at once. What could this kind of power lead to? And what does it say that, for her debut film, Nelly Kaplan granted it to a female sex worker? Acquiring the tape recorder is a crucial step in Marie’s domination of the town.

When Marie enters the store, home to the tape recorder, with André she has no ulterior motive. She is there to shop, to spend her hard-earned cash and return home with more fanciful items to continue her elaborate decoration plans. When she discovers what the tape recorder can do, André advises her against more purchases and so it stays in the store, waiting its turn. Once she knows such an object exists, a plan begins to form behind her sharp, cat-like stare. Bernadette Lafont plays Marie with a wild-eyed impertinence, confident and assertive, always conveying the sense that she knows something that everyone else doesn’t and is brazenly pleased about it. She is the town outcast, but her work grants her an all-knowing power; as each man arrives for his weekly visit, despite swearing to his wife he would never, Marie realizes the havoc she could provoke in the town were she to reveal such secrets.

André is a client, but he’s a sophisticated one; he is from out of town, showing up every once in a while to bring his traveling cinema to Tellier, always with gifts for Marie in tow. Though a male character, Kaplan exempts him from her protagonist’s tricks as he’s aided by his ability to offer Marie a way out. André wants her to leave the confines of Tellier and travel with him—“I’ll show some great films for you,” he promises. But this comes with a different kind of confinement for Marie, another life lived at the behest of a man and one who can ultimately exert financial control over her. Still, his wealth and freedom of movement means he is singularly useful to Marie, particularly when he hand-delivers her the tape recorder on his next visit.

A powder blue box with two small reels above a slider of controls, the object itself is fairly simple and nondescript. Marie learns its rudimentary instructions quickly and puts it to use, although Kaplan is careful to keep her plan for it elusive. We know she has it in the house, but has she turned it on? What is or isn’t it recording? The mayor of the town who bad-mouths his wife while seeking Marie’s services? The pharmacist attempting to blackmail her into splitting her profits with him? This new technology anticipates a future of surveillance the town of Tellier has not yet caught up to and marks a dynamic threat to their long unchallenged behavior. The ability to record, to document, is all the more threatening given its implausibility to the others. Men arrive at Marie’s cabin with the confidence that they won’t be discovered, while her hidden power and wealth of evidence against them grows and grows.

And so, when Marie finally plays back what she has recorded to the townspeople, in a church no less, her grand plan reaches its peak, revealing all their misdeeds and bad behavior to the community. Kaplan said she saw Marie as “a witch who doesn’t let herself be burned​​,” choosing to be the firestarter herself. It’s a role she takes in stride; she pours gasoline over every inch of her cabin and sets it on fire in a pre-emptive strike, perhaps, of what her foolish clients may enact themselves. The recording causes as much damage of its own, blazing through marriages and friendships and businesses, indefatigable. Turning her back on the ruins, Marie skips merrily down the road away from Tellier in a pair of gold heels and a matching purse. Her tennis skirt swings gently as she struts, limitless and assured, off to start a fire somewhere new.