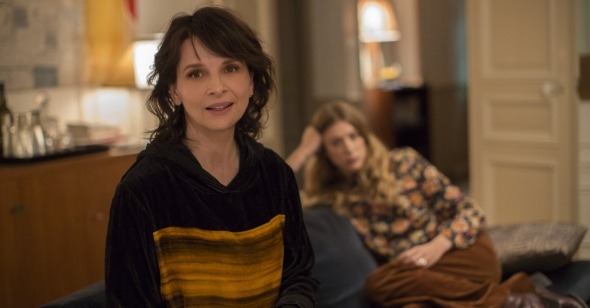 In his memoir A Post-May Adolescence, Olivier Assayas recounts Guy Debord’s enduring impact on his artistic practice. In particular, he describes how the French theorist’s work led him to conceive of filmmaking as a kind of Situationist endeavor: a “conscious creation in the domain of everyday life.” Each new project, then, would draw from a specific set of resources to respond to a particular moment, often in tension with the dominant commercial interests of the day. But despite Debord's influence, Assayas’s cinema stands apart from that of the Situationists. His films bear essayistic tendencies bound by a similar conceptual/intellectual bent, but they remain squarely in the realm of fiction filmmaking, and arguably owe much more to his fruitful collaborations with various actors: Maggie Cheung playing “herself” in Irma Vep (1996), Kristen Stewart leveraging her millennial icon status in Personal Shopper (2016), and Juliette Binoche weaponizing her international stardom in Clouds of Sils Maria (2014). In this regard, his latest feature Non-Fiction (2018) might seem to break the trend, for though the film again features Binoche, it seems to offer her a starkly delimited, doggedly "minor" role—yet in it, the storied French actress manages to locate a number of uncanny resonances, while also offering one of her most buoyant performances to date.

The film, whose original French title is Doubles vies (or “double lives”), takes the form of a sexual roundelay in which Binoche plays Selena, a middle-aged TV actress married to Alain (Guillaume Canet), a minor, but well-regarded publisher. Like their respective careers, their partnership is a modest success: neither is struggling, exactly, but they’re not above looking for alternatives. Alain is sleeping with Laure (Christa Théret), his company's much-younger, millennial head of digital transition, while Selena is carrying on with Léonard Spiegel (Vincent Macaigne), a writer of “auto-fiction” whose latest novel Alain rejects. Rounding out the cast is Léonard's longtime partner Valérie (Nora Hamzawi), a no-bullshit professional working a local politician’s campaign trail.

With Non-Fiction, Assayas shifts into more comedic terrain—though his underlying interest remains, as always, the ground-level manifestations of globalization. Here, the French director thrusts the viewer into the territory of bourgeois intellectuals with their endless—and endlessly au courant—dinner-party palaver, which he uses to inventory a number of timely concerns: the marketplace of ideas, the dematerialization of the written word, the rise of e-readers and social media, not to mention the place of art and politics in all this. Over the course of the film, each of the characters will voice positions informed by their dalliances as much as by their professional endeavors—and their respective decisions regarding how to carry on in these will propel much of the action. (As if to remind the viewer that some things aren't so easily discontinued or compartmentalized, there’s Alain and Selena's son, who bursts on-screen as something of an afterthought all of two times in the film.)

To treat Non-Fiction as a lofty treatise on contemporary mores, though, is to take the film far more seriously than it takes itself. The corny tagline of the U.S. release poster (“A comedy about current affairs”) is both appropriate and unimprovable, and also captures something of the film’s modishness. Non-Fiction isn’t remotely satirical, but when considered within the context of Assayas’s career, it comes across as a bit of a lark: the kind of movie where everyone seems to quote the famous line of Giuseppe Tomasi di Lampedusa's novel The Leopard: “Everything needs to change, so everything can stay the same.” Assayas’s camera roves about as sleekly and confidently as ever, but gone are his usual virtuosic setpieces—think of the extended party in Cold Water (1994) or the nocturnal jaunts in Irma Vep—in place of which the French director offers mostly talk, filmed in setups that register as self-consciously nondescript. One can liken the film’s milieu to that of Late August, Early September (1998), 20 years on, but its sundry discussions more often remind the viewer of Woody Allen (whom Assayas has himself cited as an influence), complete with the kind of intellectual solipsism that such a comparison implies. To create a work of art so in sync with the zeitgeist is, after all, to flirt with obsolescence. Non-Fiction practically tumbles into bed with it.

Such characterizations should not be taken as pejorative, since the disjunction between Non-Fiction’s relaxed tenor and the dizzying velocity of its discourse is the film’s defining tension. In this, Binoche’s performance, which finds a precise distance from the script’s sexual/intellectual antics, is the ideal complement. The role of Selena is a less dynamic one than Maria Enders in Clouds, a film steeped in the glamorous world of international stardom, but it leverages Binoche’s persona to a similar extent, though in the opposite direction; it’s one of Non-Fiction’s running jokes that no one seems able to correctly name the title of Selena’s hit TV show (Collusion, not Collision) or her role in it (a “crisis management expert,” not a cop). Indeed, the role of Selena often requires that Binoche look like she’s not doing much at all—which of course is its own challenge, since she opens herself up to accusations that she is, on some level, merely playing herself. (It’s not hard to imagine such charges going back to her debut in André Téchiné’s Rendez-vous, where her character, an aspiring actress recently moved to Paris, is insultingly asked: “How does it feel to take that [make-up] off and find that there’s nothing underneath?”) It’s easy, after all, to underestimate the seeming effortlessness of Binoche’s craft: the way she glides between her real-life persona and her various roles, challenging the viewer to recognize her performance not as a kind of mask to be put on and taken off at will, but as a dynamic movement along a continuum of unfixed identity.

The film's two titles gesture towards this, though there’s also the matter of Léonard’s various romans à clef, which are invariably filled with the tawdry details of relationships past and present. The latest of these, amusingly titled Full Stop, makes reference to a sexual encounter with Selena during a movie—though as she reminds him, the film in question wasn’t Michael Haneke’s 2009 Palme d'Or-winner The White Ribbon, but Star Wars: The Force Awakens, a knowing joke on Assayas's part that nonetheless betrays an anxiety regarding the popular. Like Clouds of Sils Maria before it, Non-Fiction operates at the intersection of life and art (“All fiction is autobiographical,” Léonard repeats frequently), which requires that Binoche and Assayas once again confront popular (Internet) culture and the diminished role of the artist within it. (One recalls the scene in Clouds where Kristen Stewart’s attempts to explain why a particular superhero role is interesting results in Binoche’s Maria just laughing nervously.) Even beyond any sort of high/low dichotomy, however, what’s at stake here is the perpetual question of artistic choice, of how an artist should respond to the world that the characters’ talk is meant to describe. In this instance, it’s salient not just that Haneke is a Cannes mainstay (and thus somewhat apart from the prevailing apparatus of entertainment culture), but also that his first collaboration with Binoche in Code Unknown (2000) occurred at her prompting.

Binoche’s film career is rife with such instances—developments that together constitute a trajectory determined not just by propitious circumstance, but also by perspicacious choice. Refusing to be locked down, Binoche fleetly steps between a variety of projects, actively broadening her influence with the odd Hollywood supporting role or Miramax prestige picture, while remaining committed to working with artists outside established commercial systems. And that active, searching tenor is just as evident on set: While working on Blue (1994), Binoche recalls convincing Krzysztof Kieślowski to let her smile in the film's final shot; the Polish director consented and finally kept the resulting take. For Binoche, being directed—knowing when to be accepting, when to push back, or even what projects to choose in the first place—is an art of its own.

As an actress, Binoche excels at gliding between naked vulnerability and a kind of flinty combativeness, a talent that Assayas’s scripts (Summer Hours especially) have previously obliged. But the role of Selena provides few, if any opportunities to showcase those strengths; Non-Fiction neither modulates its overall tenor nor its comic beats to suit any single actor. What the part so adroitly handles, though, is Binoche’s persona, recognizing not just her appeal and artistry but also the challenges of navigating the prevailing film culture in the way that she might have before. It seems no accident that she has, in recent years, intensified her commitment to more auteur-driven projects.

Now decades removed from her international breakout in Philip Kaufman’s The Unbearable Lightness of Being (1988), the storied actress is faced with an environment where categories of taste have been reified to an unprecedented degree, such that any departure from one’s sphere of influence is made to seem reactionary. Make no mistake, to even produce a mid-budget, Cannes-bound feature is to embrace a certain degree of irrelevance—true before, but even truer now. (It’s rather apropos that Clouds premiered in such proximity to Gareth Edwards’s king-sized Godzilla reboot, in which Binoche’s character is killed off within the first four minutes.) For an artist such as Maria Enders, there's the option to either participate in the corporate-driven monoculture, as Binoche did alongside MCU-veteran Scarlett Johansson in Ghost in the Shell (2017), or else accept a marginalized niche. For someone like Selena, that niche is, increasingly, all that remains. Is further retreat the inevitable response?

Towards the end of Non-Fiction, as the two couples meet up at a spacious seaside vacation home, Selena remarks that she turned down a fourth season of her show to take on the lead in a community theater production of Phèdre—an “aging actress” role to mirror the trajectory of Clouds of Sils Maria. But the change of location—a striking departure from the cramped spaces of the previous 90 minutes—suggests a move beyond the usual demarcations of failure and fulfillment; in Selena’s decision, one finds a measure of both. There’s a recognition, finally, that a redoubt need not mean confinement or cowardly retreat, and that even within a limited domain there’s still much to be done. For Binoche as much as for Assayas, this is a reaffirmation and a challenge. Her performance, much like the film itself, is an act of conscious self-effacement that doubles as its own high-wire act.