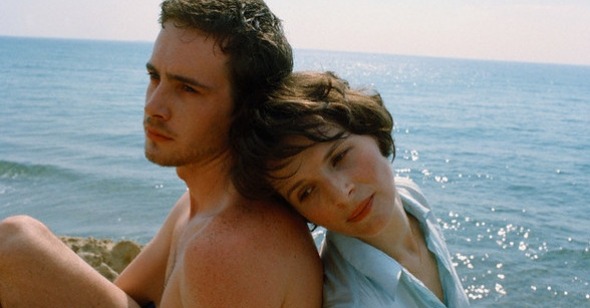 In an interview with Criterion, Juliette Binoche insists that she needs to sometimes depart from the director’s perspective in order to delve deeper into her sensation and perception of the character. “They (the filmmakers) don’t try to hold onto the power because they know the power is not in their hands, it’s somewhere else.” It’s in the way she inhabits her characters. In André Téchiné’s 1998 film Alice and Martin, it’s impossible to tell when Binoche, with her pursed lips and half-smile, subtle head nods and small movements, fully becomes Alice, a woman defined in whole by love, but also jealousy, cynicism, and powerlessness.

We don’t see Alice for the first 15 minutes. Yet we already know a lot about young Martin: he grew up in the French town of Cahors with a single, hairdresser mother and moved to his father’s house begrudgingly before one day running away. After spending his days living in a shed, eating raw eggs stolen from a farm, he is finally arrested. His stepmother pays for his bail, so he leaves for Paris to see his half-brother, Benjamin (Mathieu Amalric).

When we first see Alice, Benjamin’s roommate, it is by a window, practicing her violin in her cramped Paris apartment. Outside, we don’t see the clichéd images of Paris, but an unsightly train track and a few cars. “Are you his girlfriend?” Martin (Alexis Loret) asks. “It’s not sexual. Isn’t that your question?” she asks in reply. Her eyes look straight at Martin, but her face doesn’t let on much. Filmmakers have typically framed Binoche in close-up, focusing on her eyes, in scenes where she always seems to look right through someone else; in this case, she’s surmising the convoluted mind behind Martin’s cherubic face. “What is she thinking?” Roger Ebert wrote upon the release of Blue (1993). “There aren't many actresses who can inspire you to ask that question. Juliette Binoche is one of them.”

Téchiné’s films delve into the intricacies of human relationships without sentimentalizing them. His characters are often emotionally scarred young people who live complex sexual and emotional lives and whose stories are related without the excesses of melodrama. In Téchiné’s Rendez-vous (1985), which made her a star in France, Binoche plays a struggling Parisian actress, Nina, who stands at the intersection of failing relationships, meaningless sexual encounters, and a career that won’t take off. The similarities between Nina and Alice, a struggling musician in Paris who grapples with her career and difficult lover, are not hard to find, as both these women explore loss, love, pain, recovery, death, and birth while practicing their art; their identities as artists are always intact.

Binoche herself is an artist, poet, and a dancer; she is adept at various processes that she can use to express her creative energy. In Téchiné’s film, she rarely indulges in grand gestures—looking at her notes, playing a violin, answering a doorbell. Her face doesn't betray much, but we see the turbulent waves, the currents beneath.

Alice and Benjamin are struggling artists trying to eke out a living in Paris; she is a violinist and he is an actor and they both keep auditioning for gigs, though nothing good enough turns up. They work other jobs and are barely able to stay afloat. When Martin pops up as an unexpected houseguest, he is a major inconvenience. After a minor protest, Alice gives in. “We’ll manage for tonight,” she says, “You can use Benjamin’s room. He’ll sleep with me.” Benjamin is gay, and while their partnership and affection run deep, the arrangement is purely domestic.

Alice thrives on affection and care, and offers nothing but love and support for a roommate who never pays on time. Her existence is determined by people’s acceptance of her. She loves tango and hates auditions. “Some music exists to heal wounds, tango keeps them open so we won't forget,” she says at one point. As Alice opens up to Martin, relating stories from her childhood, she doesn’t break down, her voice does not quiver. “I used to dream that I was playing in a village square. I was concentrating, but I was off-key . . . the whole village stoned me,” she says before adding that she’s only comfortable performing with her group. She lives with Benjamin only because he has accepted her and her love unconditionally.

While Alice seems to have control over how much she lets on, Martin is never able to voice his emotions, his lack of expression registering as a physical inability. Nevertheless, he is so handsome that right after arriving in Paris he lands a modeling job just by sitting in a cafe. When Benjamin, Martin, and Alice eat dinner at a Chinese restaurant, Alice says to Martin, “At your age, I was at the Conservatory. It’s the stage fright that did me in.” There is evident jealousy, not just because Martin has made himself a career in Paris quicker than she was ever able to, but also because Martin, much younger, has the vitality of youth.

Binoche has likened the actress-director relationship to that of a child and her parent: “You don’t break the child’s innocence, you don’t break the child’s spontaneity.” Benjamin, the struggling actor, is perfect for mothering because Alice’s affection is his only succor. Martin, on the other hand, has a definitive public-facing existence. When Alice sees his face plastered everywhere, she is overwhelmed, breaking down at the prospect of sharing her object of affection. She does not have the words to voice this betrayal and so she rage-eats a runny, fried egg while completely ignoring Martin. This is a scene only Binoche could act without making us laugh; her whole body plays out the anger that she does not need words to articulate. Martin tells her, “I try not to show it, but I am fighting for you.” She asks him to leave only to later surrender herself to him. No one has ever fought for her before.

The immense power that Martin holds over Alice is finally ruptured when Martin undergoes a nervous breakdown and is barely able to function. Alice and Martin would seem to be Martin’s story, but it is Alice who makes sense of it. She is the real author, untangling the knots and twists of his life to make sense of Téchiné, Olivier Assayas, and Gilles Taurand’s script. When she has the narrative reins, Alice asserts, “I am fighting for you now and there is no turning back for me.” She is aware of the power she holds. The title Alice and Martin does not allude to a love story of equals; thanks to Binoche, Alice comes first.