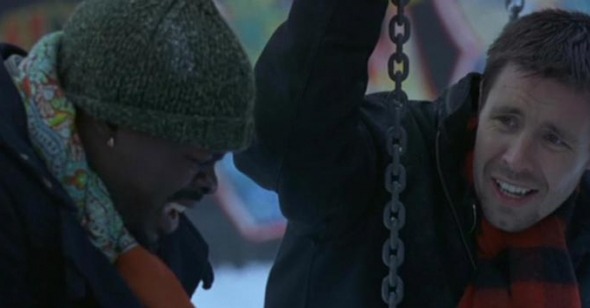 In America, Jim Sheridan's heartfelt portrait of a family in crisis, waits patiently for much of its running time before explicitly acknowledging its portraiture of spirituality in crisis. Enraged, and in fear that his family—already beset by the loss of five-year-old son Frankie, and the near insurmountable trials of emigration from Ireland to a junkie slum in New York City—is being further endangered by the sway of false hope administered by African neighbor Mateo (Djimon Hounsou), Johnny (Paddy Considine) bursts into the apartment of this “man who screams” in a confrontation which marks the film’s emotional centerpiece. "You don't believe?” Mateo demands of Johnny. Johnny: “In what?” “God.” “I asked Him to take me instead of Frankie. Do you know what He did? He took us both. Look what He put in my place.” The scene contains two “reveals,” which both enrich the telling of the story to come and retroactively inflect what has already been told: Mateo is dying of AIDS (though the disease is never mentioned by name), and Johnny and his God are on the outs.

That Johnny's crisis of faith refuses to become In America’s overtly central concern, but rather one of many discourses informing the film’s deliberation on a family’s necessary conditions for survival, is consistent with Sheridan’s depiction of the proliferation of competing voices which constitutes his Eighties-ish Big Apple. When the family approaches the city by car, ten-year-old Christy (Sarah Bolger) tells us, “we heard Manhattan before we ever saw it, a thousand strange voices coming from everywhere.” Accompanying her description is a cacophony of white noise “voices” transmitted via car radio. Here, cultural identities don’t so much melt as collide, at best achieving peaceful cohabitation. Although quick pop-culture shorthand is easily ingested by these “aliens”—Christy scolds younger sister Ariel (Emma Bolger) for cooing “Coool!” almost immediately upon their arrival: “you’re American already, it’s disgusting”—something like true assimilation is not so easily achieved, especially, it is suggested, by the lower class depicted in and around the “junkies’ building.” On this stratum it seems the danger is not so much losing one’s heritage to some amorphous cultural blob, but rather clinging too tightly to the security of one’s origination and its attendant prejudices, at the cost of human empathy. Despite Johnny’s disenchantment with the Lord, Christie tells us via voiceover that “Fall came, and we had to go to Catholic school.” Distinction, not sameness, clearly reigns: Johnny is simply dubbed “Irish” by a panhandling junkie, Mateo’s otherness initially gives Johnny “the heebie-jeebies,” and Mateo himself seems marked by an aggressive cultural pride tempered only recently, perhaps, by the close proximity of death. The relationship between class and the difficulties of assimilation is made clear when Ariel and Christie engage in the ritual of the Halloween costume party only to find their homemade costumes reinforcing their sense of alienation. They subsequently decide that “trick or treating” will make them American, an act which results, ironically, in both the weakening of cultural boundaries marked by their introduction to Mateo, and their procurement of cold, hard cash.

Confronted with the plurality of voices in Sheridan’s heteroglot New York City, Johnny’s personal dispute with his Christian God is a discourse no more privileged than any other. To this point, the film sustains three strong visual and aural motifs: magic, aliens, and angels. Upon finally reaching Manhattan by car, the aforementioned radio noise gives way to a singular pop tune to which the family celebrates the carnival-like sights of the city. The song's explicit question, “Do you believe in Magic in a young girl’s heart?” becomes more than merely rhetorical, constituting the film's central question posed to the spectator as well as its alien protagonists. If the angel—represented by Ariel on Halloween and painted on her wall by Mateo—invokes Christianity, it must share equal time with the vaguely mystical powers of magic, and the explicit artificiality of science-fiction. Sheridan’s mise-en-scene democratizes all three as belief systems, pointing to belief itself as a necessity to survival by those besieged by circumstance. A pretend faith in simple falsities continually proves the glue binding this fragile family, functioning not merely in pacifying gestures made to children too young for the truth (“magic healing lemon drops,” Mateo’s blood as “spaghetti sauce”), but just as importantly for adults in desperate need of keeping it together. In this way In America pushes the concept of faith to its illogical extreme. If faith can be defined as believing in something in the absence of proof of its veracity, In America valorizes the occasional necessity of believing in something in the presence of its falsity.

The practice appears to come hardest to Paddy Considine’s Johnny, whose face belies a hollow pain when asked to use his trade (Johnny is himself an actor) to put on a good face for his children. It is Johnny’s refusal of belief itself, in faith for faith’s sake, which seems to render his dialogue with spirituality (or lack thereof) the least productive of the many competing discourses inherent to this strange land. Johnny can’t find work, his wife Sarah (Samantha Morton) says, because he “can’t feel anything. You’re the only actor in the world who can’t lie.” Seen in the light of Johnny’s denial of God, the sequence detailing his desperate efforts to obtain and install an air conditioner in the sweltering city heat takes on existentialist proportions. Though the sequence is infused with humor, Sheridan’s direction allows considerable time for the gravity of Johnny’s act of sheer will to reveal itself. After hauling the mechanical behemoth against the grain of Manhattan traffic and schlepping it up seemingly countless flights of stairs, Johnny must quibble over a few cents with an unbending grocery clerk, fanatically leery of junkies, in order to obtain the right outlet adapter for it. There is clearly something like “life or death” at stake here, not simply air conditioning. Yet despite Johnny’s Herculean efforts, and not unlike Christy’s attempt to use her “will to quiet the crowd” in the carnival scene, the strength of determination alone ultimately proves insufficient when a few scant seconds of air conditioned triumph lead to the loss of power in the junkies’ building. The magic of the movies, specifically E.T., saves the day. E.T. is the savior par excellence for Sheridan’s world-weary survivors, an angelic alien with magical powers receding skyward, not to Heaven—the name of the ice cream parlor across the street—but “home.”

As mentioned, Christy’s act of will, unassisted, fails to influence the outcome of the carnival game on which her family’s future so absurdly rides. Unlike her father, however, she has further recourse in the use of three wishes, granted by her dead brother Frankie. These bring results. Christy’s spiritual belief constitutes an appropriately fruitful amalgam of Christianity (Frankie still looks down from Heaven) and Aladdin’s Lamp. In considering the multiple levels of spiritual discourses at play in In America, one cannot overlook the fact that the Christy herself is something of a deity, informing us with “voice of God” narration, able to stop or speed up the narrative as she sees fit. In a way her acts of Promethean defiance find affinity with her father’s actions. Christy however, is clearly better equipped to embrace belief as survival; with a ten-year-old’s unfettered access to imagination and her magic-wand/camcorder, she creates her own movie magic.

At times In America asks of us, as it does its characters, seemingly too much belief in belief, as when explicit editing technique reincarnates the dying Mateo’s soul in the new Mateo’s body, awakening to life. Here it is helpful to remember Christy’s role as Creator, and fair to excuse such literalism in a discourse so deliberately engaged, on so many levels, with the “suspension of disbelief.” Similarly, the film’s climax seems to reach a point of exhaustion vis-à-vis its apparent validation of the delusional. As Johnny and Christy convince Ariel that she is actually seeing Mateo wave goodbye while riding his bike across the moon, one begins to wonder just how healthy all this, well… lying really is. Yet it is often these very instants of exhaustion—whether our own or the characters’—that have a way of setting up the film’s most effectively moving moments; Mateo’s moonlight ride provides Johnny, with Christy’s help, a final cathartic reckoning of his son’s death through tears he had earlier denied his idle God. Earlier, when Johnny attempts to serve Christy yet another hollowed-out, plastic-smiled performance of the ever-optimistic Dad in a pivotal hospital scene, she shoots back, “Don’t ‘little girl’ me…I’ve been carrying this family on my back for over a year,” revealing both the extent of her strength and the true toll of this family’s despair. It is ultimately the poignant power revealed in the four central performances and Jim Sheridan’s simple story—culled from his own immigration experience and the death of his brother Frankie—that leave us content that we’ve swallowed at least as much truth as fiction In America.