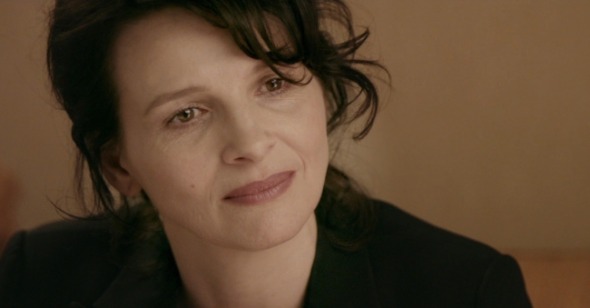 In the Flesh
Nick Davis on Juliette Binoche in Elles

Juliette Binoche filmed Elles (2011) amidst a pronounced pivot in her career toward collaborations with globally prominent auteurs: Haneke, Ferrara, Hou, Assayas, Cronenberg, Dumont. Commentators rarely mention Elles’s writer-director Małgorzata Szumowska within that list, despite her having won three awards at Berlin and one at Locarno for four separate movies over the last ten years. Does anything but standard-issue sexism explain the fact that such an accomplished artist remains virtually unknown to U.S. cinephiles and largely untouched by U.S. distributors?

Elles stands as a double-outlier in Szumowska’s portfolio. It’s the one feature she made from 2008-2018 that reaped no festival prizes and yet, care of Kino Lorber, the only one granted a decent run in U.S. art houses. Binoche’s headlining presence almost certainly made that possible, even if the marketing brazenly misrepresented both actor and vehicle. The poster is nothing but a wet-haired, bare-shouldered Binoche spilling out of a too-tight, ruched-satin sheath dress that she only wears onscreen for about 60 seconds near to the conclusion of a frequently graphic study of modern sexual economies from which Binoche’s character feels pointedly excluded. Promotional images for this kind of movie often entail misdirection of a different kind, flaunting the nubile bodies of young women whose lurid objectification the script explicitly decries. Against that all-too-typical pattern, the folks at Kino clearly saw Binoche as a credible and titillating sales hook and a sufficient artistic signature. (Szumowska’s name appears nowhere on the DVD cover.)

Elles trusts its star completely, centering her within its plot about a magazine journalist, Anne, increasingly preoccupied with the subjects of her latest article, two college-age Parisian women supporting themselves through sex work. That narrative holds great potential for prurient spectacle, but rather than simply indulge voyeuristic habits, the film adopts them as its subject. The movie gravitates ever further into Anne’s orbit while posing a series of questions about the slippery spectrum that encompasses and sometimes unites journalistic interest, vicarious thrill-seeking, and a certain middle-class romanticizing of younger, sexier, poorer people and their negotiations of dangerous precarity. The movie delves only so far into the actual experiences of sex workers, concerning itself more with the imaginative pull they exert on folks who know nothing of their real lives, but for complicated reasons wish they did. Anne, a well-delineated character but also a possible surrogate for the movie’s inquisitive audience, fantasizes about shy, Paris-born Charlotte (Time of the Wolf’s Anaïs Demoustier) and saucy Polish expat Alicja (Cold War’s Joanna Kulig) while pretending to be a neutral biographer or, in some vaguely defined way, a feminist advocate raising awareness about their circumstances. More and more, scrupulous research dissolves into embellished daydream.

I question whether a male filmmaker would have couched Anne’s desire in such active, present-day terms or elicited such confident, self-exposing performances from the central trio of women. I also doubt if Elles would be as effective with anyone other than Binoche playing Anne, not just because of the resonant archive of early work she conjures but because of her recent proclivity for deploying the genteel and the subversive in unpredictable ratios. Plenty of her French peers lack the specific personality to hold a film like Elles in such balance. For comparison, imagine Marina Foïs in the role, but then recall how even this accomplished performer, similarly cast in Laurent Cantet’s The Workshop as a solicitor of young people’s complex testimonies, simply couldn’t pull focus from her volatile charges, even when the script invited that. Conversely, cast Isabelle Huppert in Elles and the audience instantly anticipates the kind of perverse strutting in Charlotte’s and Alicja’s imagined shoes toward which Elles slowly builds.

Elles arrived at an ideal juncture in Binoche’s career where she began exploring the power and elasticity of a middle-aged body, majestic and eloquent though no longer defined by unbearable lightness. Setting aside her ongoing, demanding exertions in the world of modern dance (though her screen performances often grow richer when analyzed through this lens), Binoche brought a heavy gait and blowzy, agitated energy to Hou’s Flight of the Red Balloon, showcasing new modes in her expressive gifts while fruitfully counter-balancing that film’s delicacy of tone and form. Her body registered similarly in key passages of Kiarostami’s Certified Copy, as in the famous scene when she changes outfits and applies makeup, treating the lens as a vanity mirror, showing us how she styles her face and her frame in an attempt to woo the man who may or may not already be her husband. Even more than Red Balloon, Certified Copy foregrounds formal tricks and intellectual puzzles to such an extent that Binoche’s character might have felt abstracted, like a floating phantom in a Resnais film, if she hadn’t accentuated her physical energy and weight. Her single-sequence cameo in Cronenberg’s Cosmopolis, her first film after Elles, was practically a Pina Bausch routine, as she lasciviously flung and folded herself around the interior of Robert Pattinson’s limousine.

Exemplifying her increasing turn toward the corporeal, Binoche enables Elles’s boldest gambit: as its interest escalates in what Anne absorbs from her call-girl informants, the film subordinates dialogue and eschews voiceover, studying instead the effects on her body. As we observe Anne amid household routines, stocking her refrigerator or switching laundry from washer to dryer, we start to glean new enervations in her movements and new pauses for cloudy reverie. A teetotaler, she relents to sampling vodka with Alicja, leading to a drunken, laugh-filled bout of inelegant pasta-eating and a shared dance to modern electro-pop; Binoche shows us how simultaneously awkward and easy it is for Anne to adopt what she considers a youthful exuberance. (We also note the joyful, exquisite rapport with young performers that would flower even more fully in Clouds of Sils Maria.) Anne’s reawakened vitality has no outlet with her family, an epiphany that culminates during a late-film dinner party she hosts for her husband’s boss. Silent throughout the meal and filmed mostly from behind, Anne’s protracted stillness must be eloquent enough to signal her subtly mounting allergy to her own life. Abruptly, and wordlessly, she rises and exits her apartment, in what seems like a 21st-century version of a Doll’s House denouement; she rejects a domesticity she can no longer tolerate, haunted as it now is, in Szumowska’s inventive staging, by a bevy of new ghosts. But it turns out Anne’s mind remains unsettled, as her body has been throughout. She will soon return home, entailing another, rougher, nearly silent ballet to convey her flailing identity and battered equipoise.

Szumowska is a consistent and gifted artist of the somatic; her best film, simply titled Body (2015), approaches eating disorders, experimental physical therapies, and the labor of coroners from bold, eccentric directions. She of course merits credit for allowing the actors’ bodies, not just Binoche’s, to transmit so much unspoken story content in Elles. Conversely, Szumowska’s writing does not always match the level of her framing, editing, choreography, or character insight. The endings of her scripts, in particular, often feel precipitous and truncated, but these are gaps Binoche is especially well equipped to fill. She renders Anne’s day-to-day movements with more than enough nuance to establish context for the climactic moments, allowing them to fulfill a coherent arc rather than arrive from nowhere or score abrupt rhetorical points. That luminescent face that has launched a thousand close-ups is, of course, another constant boon to Binoche’s thorough characterization of Anne, but Elles is largely a film about what transpires below the neck. This story, told this way, could have found no better author.