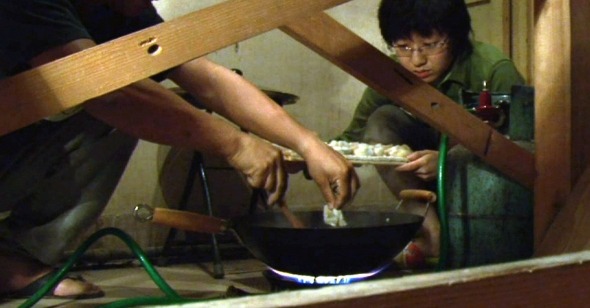 Economy in filmmaking is a peculiar virtue, one that is often as much a product of contingency as conviction. For all the filmmakers over the years whose style has come to be defined by its economy, few have demonstrated quite so comprehensive an understanding of the term’s polyvalent meanings as Chinese filmmaker Liu Jiayin. Among other things, her second film, Oxhide II (2009), is a painstaking lesson in how to turn a modest piece of meat into a great quantity of dumplings. Out in the world, after all, economy is above all a matter of determining who gets fed.

As its name suggests, Oxhide II is a part of a larger project—Liu made the first Oxhide in 2005 at the age of 23, and a third entry has purportedly been in the works for almost a decade. The director has also suggested, very credibly, that the series could extend indefinitely. If there is indeed such a thing as the Oxhide cinematic universe, it is as yet localized entirely inside the apartment inhabited by Liu’s family, a decidedly modest space within the ascendant expanse of contemporary Beijing, near train tracks that shake noisily every 20 minutes or so. To explore the space of her family home, Liu engineered a special instrument, constricting the frame of a DV camera with a construction-paper mask, creating a mock-cinemascope 2.35:1 aspect ratio. While widescreen formats have traditionally been used to draw more of the world into broad panoramas, Liu has said that she chose this aspect ratio so that her audience would see fewer things, keeping her razor sharp frames static. Far from highlighting her own resourcefulness, she takes no steps to obscure the limitations of her means or the banality of her narrative material, but reduces them still further. The humility and transparency of her approach reminds me of a line from Robert Walser, “We don’t need to see anything out of the ordinary. We already see so much.”

Indeed, the subject matter of the Oxhide movies is profoundly and urgently quotidian–– the petty material concerns that animate much of their drama constitute a major part of life a great many people. Both Oxhide and Oxhide II draw upon the same basic narrative material, the sequestered home life of Liu’s family, but with certain key differences. While the first film is a more generalized look at the family’s life over a broader swath of time, its successor is set over the course of a single night as the family prepares, cooks, and consumes a dumpling feast. The movies take their title from the family’s livelihood, a leatherworking business run by Liu’s father, Liu Zaiping, with help from her mother, Jia Huifen, both of whom play themselves alongside their daughter (the family cat Maodou also makes a couple of exciting cameo appearances). The family shares a certain aesthetic sensibility—or, otherwise, Liu’s parents have the patience of saints—as well as a natural comic chemistry, albeit an extremely dry one. They each take on an effective comedic persona: Liu’s father alternates between patriarchal pride and a certain boyish petulance, while her more businesslike mom keeps the peace with a degree of incredulity. In the earlier film, Huifen replies to an extended soliloquy from her husband about the indignity of selling his creations at a discount with an aphoristic zinger: “Keep your dignity and wait for death.”

Liu also mines her idiosyncratic mise-en-scène for visual humor. In the series’ first installment, the family watches as Liu’s father performs a celebratory dance after a lucrative day at work, while the women maintain a running commentary (“See how fat your dad is? However, he’s very agile.”). Liu’s camera isolates the man’s midsection, but despite the spatial restriction, a full dramatic arc elapses within her narrow frame. Zaipeng teaches his daughter some moves from the popular Cultural Revolution-era ballet, The Red Detachment of Women, and at one point selects as his dance partner the irate family cat, who squirms while being held before the static camera. The scene concludes after Huifen relates a call from one of the family’s creditors, to whom the money will go, and the deflated Zaiping takes a seat, showing us his face for the first time in the scene, his hangdog expression serving as a punchline for Liu’s nearly eight-minute-long take.

Oxhide II attains an even greater degree of rigor than its predecessor, to the point where many descriptions of the film can read like preemptive apologias, eager to reassure nervous viewers that the movie is, in fact, watchable. The action unfolds in real time, following the family over an evening preparing jiaozi, popular Northern Chinese dumplings that are consumed en masse to celebrate the New Year. Liu captures the action in nine takes lasting 132 minutes, with the first shot extended for over 20 minutes. Over the course of the endeavor, the camera completes a 360-degree journey around the table. For all the formalism of Liu’s direction, she never allows herself to fall into a rut, allowing the heady mechanism to carry her along. She fully utilizes not only the circumference of the table, but also vertical space. With the use of a well-placed worklamp, a canted angle from above divides the workspace into two sections, visually turning the separate preparations of chives and dough into two dynamically opposed planes of action. Later Liu contrives Maodou biting her mother’s ankle in order to move the action to the floor underneath the table, using its support beams to frame the various members of the family in bold, shifting compositions that at times approach the baroque.

Liu’s camera might remain static, but the movie is anything but. Over the entire course of the film, the family is continuously in motion, chopping, stirring, kneading, etc. For her day job, Liu has written TV dramas and taught screenwriting; and although much of the dialogue and action feels offhand, like a very accomplished home movie, it’s a finely orchestrated, organized down to the second. The dumpling-making process itself determines the timeframe, and Liu largely cuts on action, emphasizing the temporal. Measuring time through familial ritual, Liu’s project is aligned with the work of Ozu and Akerman, tracking the process by which the passing hours accumulate into the passing of one generation into the next and onward into the flow of history.

The tensions between Liu and her parents in Oxhide II are gentle but pivotal. With her characters’ heads often excluded from her compositions, Liu’s characterization emerges from her performers’ physicality, with the movements of hands often accomplishing what actors’ faces might in another film. While her parents exert an impressive mastery over the process, Liu’s character is halting and awkward. When her father instructs her to cut the chives into four-centimeter pieces (as long as they are wide), Liu dutifully leaves the room to fetch a ruler. There’s a self-deprecating element to this moment, part of the self-reflexive current that run’s through the film’s dialogue, wherein the discussion of the dumpling-making process comes to comment on the production of the film itself. “Do you have to take everything so seriously?” Liu’s father asks our fastidious filmmaker. Yet Liu’s ability to master the process has ramifications for the family that go beyond this particular evening.

It’s difficult to imagine a film like Oxhide II being made at any other time or place, both because of its means—the DV camera, customized to fit the director’s exact needs—or its director, a young woman in the developing world from a modest background, who also happens to be equipped with a formidable artistic education and a considerable knowledge of global cinema. It’s also unlikely that the movie would have quite the same significance but for its historical and geographical context, situated firmly as it is in the heart of the world’s oldest civilization, undergoing an unfathomable transformation affecting not only its own citizens but people across the globe. Even without overtaking the main action, the family’s economic anxieties are palpable. Liu’s father lost his shop before the film’s production, though within the narrative the business is still in the process of going under. Who knows what may next be carried away in these currents?

On its most essential level, the principal drama of Oxhide II concerns the passing of knowledge from one generation to the next, a process that in the present era often appears to have been radically and catastrophically disrupted. The action transpires in a place of precarity. Liu’s father has already lost his business, and his future as a dedicated craftsman (and by extension, of the crafts writ large) is still uncertain. Liu had better learn to make dumplings. If she doesn’t, her descendants may lead lives devoid of jiaozi.

And yet there’s something in the rigorous construction of Oxhide II that approaches the lightly utopian. The family works well together and their dumplings are by all accounts nourishing and delicious. They conclude by drinking the water in which the dumplings were boiled as a broth. Thus the meal comes full circle as the camera finishes its revolution, bringing the film to a circular, mandala-like state of completeness. Likewise, there’s the generational dimension of the film’s production, with Liu drawing her parents into her own consummately 21st century style of filmmaking. Collaboration is always the central aspect of filmmaking, but it is here so thoroughly foregrounded and celebrated as to emerge as a legitimate end unto itself. Man, after all, does not live on dumplings alone.