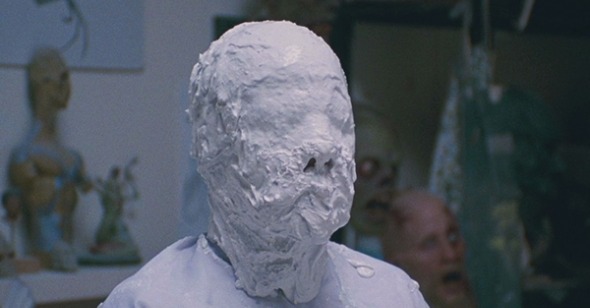 For the greater part of Sofia Coppola’s 2010 film Somewhere, movie star Johnny Marco (Stephen Dorff) is holed up at West Hollywood’s Chateau Marmont. He’s been there long enough to know the waiters and valet, but his suite shows no semblance of home. Here he numbly endures social interaction and follows his publicist’s orders. Only visits from his daughter Cleo (Elle Fanning) provide dim proof of a beating heart. Johnny takes her to an ice skating rink, where her routine charms him. They share an underwater tea party at the Chateau’s pool and order every available ice cream flavor on a trip to Italy. But right now, sitting alone on the hotel room floor and crying into the phone, he is “fucking nothing.”

With five features under her belt, Coppola has cemented her reputation as a poet of surfaces. Film has a history of such auteurs, Alfred Hitchcock and Bernardo Bertolucci among them. But unlike such predecessors, Coppola uses style to concretize states of transition. It invokes Jean-Paul Sartre’s distinction between being and existing: “Man is only what he does.” Her films beg the question: what if he does nothing? On the whole, her characters lack motivation. Lost in Translation’s Bob Harris does what aging stars do: fly to Japan for lucrative whiskey ad campaigns. The Bling Ring’s teenage offenders blindly submit to the dictum of celebrity culture: be seen. To view Coppola’s plots as flimsy or nonexistent is to miss the point. The depth of her work is not characterized by meaning, but by organization. The character portraits, spaces, and sounds that comprise her films foster a unified vision of emptiness.

Take, for example, a pole dance set in Johnny’s hotel room. In theory, it has all the trappings of an erotic encounter. In this scene, it is as synthetic as the candy striper dresses worn by the Shannon twins of Playboy fame. The girls swivel up and down identical portable poles, which they fold and stash in gym bags at the end of the routine. Their skin squeaks against metal while a cheap boom-box plays Foo Fighters’ “My Hero.” When the girls glide facedown to the floor, they fall out of frame. Their momentary absence makes one wonder if they any more alive than the wall that now takes their place? All the while, Johnny lies on his bed, motionless, and it isn’t long before he falls asleep. On his bedside table is a cocktail of numbing agents: prescription meds, beer, and wine. The dancers only add to the mix.

Unformed subjects are Coppola’s trademark, and by staging such endurance tests for character and viewer alike, she is able to give us a nuanced picture of their despair. A competent director can depict boredom in a moving image. A great one makes it fascinating to watch. In Somewhere one such image comes when a team of men heap thick white goo onto Johnny’s face to create a mask for an upcoming role. They leave two small holes in the nose for breathing. The scene cuts quickly to Johnny sitting alone as the plaster sets. There is no movement and the only consistent sound comes from Johnny’s deep breaths. For one minute and 32 seconds, the camera creeps toward his blank visage. The power of the final close-up brings the tedium of Johnny’s existence into plain view. Coppola’s patient, deliberate zoom shows that no facial cues are needed for the message to come across. Johnny’s expression is vacant over the course of much of the film; neither sex nor alcohol seems to stimulate him anymore. Here, covered in impenetrable plaster, the film implies just how akin to nothing he feels. Johnny and the lifeless substance that envelops him come together, he is at once dead and undead. In Coppola’s world of existential boredom, there may as well be no difference between the two.

In contrast to the emptiness of the cast, we see a couple of ghoulish masks in the background, eyes wide and mouths agape. They remind us of the absurdity of the scene, which is emphasized in the next shot, as Johnny stares at his artificially aged face in the mirror. Coppola lends a haunting depth to the scene that undermines any arguments of her films as being weightless. Immediately before this motionless shot, the technicians are busy telling Johnny what to do (“Sit up”) and what to feel (“It’s cold, isn't it?”). Then, a scene with an otherwise clear flow is punctured by stasis. Placed where it is, this one functions as a pause, an ellipsis that Coppola uniquely, and frequently, grants us access to. Herein lies her strength, her tendency to capture characters waiting: for a light to turn green, for a conversation to end, for self-discovery. In a film propelled by story, this shot would be relegated to the cutting-room floor. But, aesthetically, it paints the clearest picture of Johnny Marco. He is watching paint dry from the inside. And while there is a time limit to this—the crew explains that the procedure takes 40 minutes—in the moment, it feels more like existence than process.

Coppola’s characters live in the unbearable anteroom of selfhood, waiting to transition from one state to another. All they have is time, and plenty of it. In The Beguiled, Southern schoolgirls learn French as the Civil War rages in the distance. In Lost in Translation, Bob plays golf between press events; like Johnny, he struggles to find his identity in his profession. Behind each Suntory billboard is a soul-crushing and interminable photo shoot. This is where Coppola exposes her character. In one such scene, dozens of people are busy at work—one applies Bob’s makeup, another checks the lighting, and another holds glasses of whiskey. At the center of it all is Bob, his back facing the camera. When he turns around, everyone else shuffles out of frame. The lens, the lights, and all eyes are on him. The camera’s clicks mark the passage of time, but Bob’s expressions can’t keep up. It resembles Somewhere’s mask scene, except Bob is expected to perform. His suspended identity is marked not by a blank face, but by the photographer’s insistence that he channel Rat Pack, Frank Sinatra, Joey Bishop, and 007 (in his Roger Moore incarnation)—anyone but Bob Harris. To be sure, we never access Bob’s identity the way we never access Johnny’s. Young Cecilia Lisbon in The Virgin Suicides summarizes it best. After attempting suicide by slitting her wrists, she tells a psychiatrist: “Obviously, doctor, you’ve never been a 13-year-old girl.” As with her other films, Coppola does not intend on showing us how it feels to be one, but rather how these feelings manifest on the surface. Coppola is an observer. With her, the audience always remains on the outside.

Somewhere depicts a constant negotiation between Johnny’s blankness and his capacity to feel. As he prepares to ship Cleo off to Camp Belmont, he gives her a hug and turns to board the helicopter. Before he leaves, he shouts her name above the blare of the rotor. “Sorry I haven’t been around,” he yells. We can barely make out the words, and surely Cleo cannot at all. The film’s diegetic noises seem to keep Johnny in his state of numbness. Here, it literally drowns out his voice. The film closes with Johnny leaving his Ferrari on the side of an empty road, keys in the ignition. As he walks away, the car’s irritating alarm matches the introduction of Phoenix’s “Love Like a Sunset II,” until the din gives way to the song completely. He abandons Los Angeles on this desert road, leaving behind its noise—sirens, camera clicks, roaring helicopters—and the emptiness it all represents for him. This shift, from a monotonous, oppressive soundscape to an ethereal one, points to the imminent state of transition for a man who only recently sat, patient and faceless, as time moved and he didn’t. Sitting in an actual driver’s seat for much of the film, Johnny abandons control over the speed and direction of his life. He’s content in his stasis, leaving the audience to see it, and sit through it.

There’s a memorable scene in Lost in Translation where Bob watches expressionless as a near-naked dancer contorts to the rhythm of Peaches’ “Fuck the Pain Away.” When Charlotte arrives and asks him how long he has been sitting there, he replies, “I couldn’t say.” Coppola’s most mundane moments are so saturated with an air of ennui that they barely need to justify their duration. The first substantial line of dialogue in Somewhere clocks in at minute 15. To stick around is to observe and to let Coppola’s mood envelop you. The result is being privileged to a picture she has rigorously crafted with patience—and perhaps a little drying rubber.