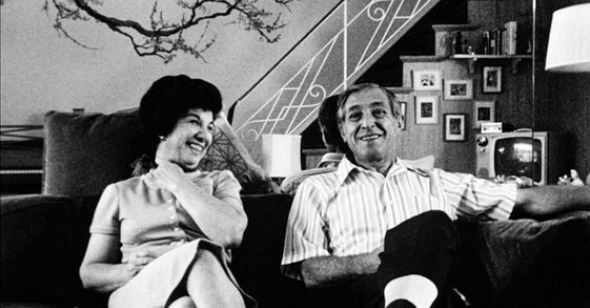 There’s a two-minute passage in Alfred Guzzetti’s extraordinary personal documentary Family Portrait Sittings (1975) in which the filmmaker’s mother, Susan, talks about turning 60. It’s the first time in 20 years, she tells her son, that she’s felt the meaning of her age.

Anchored in this offhand observation, the scene gets to something ineffable about the temporality of motherhood. It’s one facet of the film’s larger inquiry into how our relationship to family colors our experience of time. As the testimony of a working mother habituated to the ritual sacrifice of time, there’s something familiar about her claim to episodic amnesia, perhaps so ordinary a sentiment that it verges on cliché. And yet her words are graced by something deeper, almost novelistic—the Proustian search for lost time, the disavowal of clock-based duration in favor of a cyclical, recursive experience of being and memory. Her thoughts are poetic and intellectual, but grounded in everyday experience. “In truth there is no divorce between philosophy and life,” Simone de Beauvoir proclaimed in 1948, and indeed Susan’s words deliver a Beauvoirian cocktail of the personal and the philosophical. It’s hard to think of an earlier example of cinema that centers on the existential reflections of a working mother like this.

Family Portrait Sittings, Guzzetti’s first feature, appeared not long after the emergence of the Boston-centric movement of personal documentary in the late 1960s, a wave distinct from earlier avant-garde filmmakers’ efforts at a personal cinema, such as Maya Deren, Stan Brakhage and Jonas Mekas. Like that of his contemporaries Ed Pincus, Jeff Kreines, and Ross McElwee, Guzzetti’s work utilized the insights of direct cinema as well as the possibilities of lightweight, lower-cost sync-sound technology to explore the subjective. Made over the course of four years, the film weaves together home movies, photographs, and interviews with relatives to sketch a composite portrait of his Italian-American family, where they lived, and the stories they tell about themselves. It’s an elegant meditation on time as it exists in relation to space, in stories, and on celluloid. It shows how domestic life both riddles and reveals the eccentricities of time, laying bare the limits and irrepressibility of memory.

Although many of the film’s interviews were done in sync-sound, this particular interview with his mother was recorded just as audio, away from the gaze of the camera. He can’t remember the exact circumstance of the interview, but it must have been recorded when it was just the two of them together. She might not have revealed as much in the presence of his father, he said. Indeed, her words sound unrehearsed, as if she’s spontaneously offering up a glance at the furniture of her mind. Her voice is tinged with melancholy, yet it is more observational than mournful.

She doesn’t blame parenting for her loosened grip on time, but the accompanying images hint at the connection. In this sequence, Guzzetti crafts a visual montage of the family backyard in East Germantown, Philadelphia, using two chunks of footage shot twenty years apart. The first roll, filmed by Guzzetti’s father on 8mm Kodachrome in 1953, depicts Guzzetti’s sister Paula frolicking in the family backyard. To this, Guzzetti wove in new footage that he shot in 1972 in 16mm in black and white, the same backyard barren and unkempt by contrast. It is a space where children no longer play, the juxtaposition suggests.

Guzzetti’s use of his father’s Kodachrome footage has, in part, distinguished Family Portrait Sittings’ place in film history. Guzzetti belongs to the first generation of filmmakers for whom home movies existed before he was born. But his wasn’t the first cinematic meditation on time to draw on home movies. Jerome Hill’s Film Portrait (1972), for instance, did so a few years prior. Yet Hill was a railroad heir, and his film was lavish, full of sumptuously staged scenes, his access to home movies underwritten by his family’s enormous wealth. Guzzetti, by contrast, grew up middle class, his interest in celluloid inextricable from his father’s work as a photographer. There was a darkroom in the basement, and Guzzetti assisted his father on shoots; Guzzetti’s voice is modest and understated, and there seems something innate and unforced in his ability to reflect on cinematic time.

The stitching together of the footage creates, somewhat paradoxically, the effect of both temporal continuity and disjuncture. First, Guzzetti created nearly seamless splices between the two by printing images of the first and last frame of the clips from 1952 that he intended to use. With the aid of a zoom lens, he then used the printed images as a guide to set up his new shots, taking advantage of the shared aspect ratio between his father’s 8mm shots and his own 16mm setup. The result is a spatial field where past and present converge, a Faulknerian blurring of the line between past and present.

Yet between the two series of images, there is a significant visual distinction. Drawing on a technique Alain Resnais had perfected 20 years earlier in Night and Fog, Guzzetti aimed to create a maximal graphic alternation between the two by shooting his own footage in 16mm black and white to contrast with his father’s 8mm Kodachrome footage. He had wanted to further exaggerate the contrast between his own cinematic voice and his father’s by shooting on 35mm, but was not able to due to financial and technical constraints.

The decision to toggle back and forth between past and present in different chromatic registers and film formats highlights the passage of time between the two clips. Yet unlike Night and Fog (or The Wizard of Oz, for that matter), Guzzetti’s film portrays the past in color and the contemporary moment in black and white, an inversion that further subverts a sense of time as a linear sequence of events.

Yet another visual metaphor for time is at work in Guzzetti’s slow panning shot of his family’s backyard. These pans invest each square foot with poetic attention, revealing how the most seemingly unchanging objects in one’s everyday view—even pavement—are imbued with their own slow, subtle histories. The pan itself also embeds a perspective on time, a movement that indexes the idea that something cannot be revisited.

Guzzetti explained this to me over an email exchange: “When we move our eyes over a scene such as a landscape, we can—and often do—look back to see something again or jump ahead. When we watch a panning shot, we can’t really do these things. What we’re seeing is the present, and one of the edges of the frame conceals what is to come while the other conceals what has been. In the pan of the backyard, there are both repeated jumps back and forward in time (from the 16mm to the home movie and back again) and the micro-scale of time rendered by the frame-by-frame movement of the camera rightward. Where a pan stops is arbitrary. It might keep on going to complete the circle it traces. But in doing so, it can’t return exactly to its point of origin, since it’s a movie and time has passed and things have changed, however slightly.”

Time can’t be rewound. And yet, it can regenerate. Guzzetti inherited and multiplied his father’s photographic sense and his mother’s poetry. This scene reinforces these continuities, braiding the words of his mother and the footage shot by both himself and his father. The film commingles past and present, like a chord.

In the words of his mother, it’s forwards, it’s backwards.