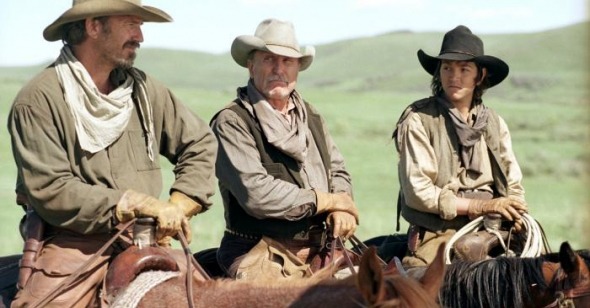 The current President of the United States isn’t the first to look westward in fashioning his public image. The affectation is an old one, stolen from Ronald Reagan, who in turn stole from Teddy Roosevelt stealing from Andrew Jackson. But Bush may be the first American President to actually model his presidency after the western genre. As a mise-en-scène, Bush Out West undeniably packs in the familiar tropes. There are panoramic horse rides though the plains of Texas, scenes of our hero back at the Crawford ranch clearing brush, and then the final showdown, in which Bush sees his resolve tested and responds with tough-talk—albeit frequently misspoken tough-talk. Should this dressing down (a.k.a. “diplomacy”) fail, the president not only takes action, he’s also first on the draw.

It’s doubtful that Bush Out West will find a home in the canon of Western cinema. For one thing it suffers from caricatured performance and clichéd dialogue (“Dead or alive”). But, more tragically, Bush Out West is only a presidency, not a movie. Luckily for Bush, a real western came along just in time to support the charge for reelection with deserving filmic representation. Kevin Costner’s Open Range expresses a passion for the west that runs as deep if not deeper than the president’s. Like Bush Out West, it shows an admiration for the stoicism and moral clarity championed in classics like High Noon. In contrast, however, Open Range brings a much-needed dose of nuance to a genre whose clichés have grown increasingly stale under Bush’s watch. Open Range doesn’t just revisit the old clichés, it relives them in Proustian detail. Each blade of grass on the pasture gets its own brushstroke; every other line of dialogue its own laconic turn of phrase.

Presiding over the scenery are the stoild profiles of Boss Spearman (Robert Duvall) and Charley Waite (Costner), two “free-grazing” cattle drivers who cling to the semi-illicit practice of setting their herds out to graze on unclaimed pastures. The business is a utopian one by any standard—but especially Bush’s. Free of apparent economic regulations and geographic boundaries, the men literally live off the fat of the land, a luxury that Costner echoes with sumptuous views of Montana’s unpopulated highlands. At first, the retreat into the past feels so complete that it becomes a world unto itself—a bucolic bubble impervious to its own history, let alone the realpolitik of Bush Out West.

But off-camera, beyond the iconic vistas, reality is closing in. As we quickly learn, the Wild West is being divvied up into real estate, and the property owners, in this case an evildoing Irish land baron (Michael Gambon), are calling for a new world order. Cowboy heaven is also conspicuously lacking any traces of Native America. The noble savages that populated Costner’s Dances with Wolves have ostensibly been driven into extinction just in time for Open Range to present its turf battle as a conflict between good and evil white men rather than a clash of civilizations. Upon assessing the enemy however, it becomes clear that Spearman is up against more than a few evildoers; he’s challenging the march of human progress. In a role reversal, the cowboys now find themselves cast as a nomadic race on the verge of extinction, whose town-dwelling persecutors will stop at nothing to fence them in. Even the town itself becomes anathema to the cowboy way. Aside from being the enemy stronghold, it’s also a menacing blemish on Open Range ’s bucolic surface that threatens to trap Spearman and Waite in the quicksand of urban drudgery.

In the face of adversity, Spearman exhibits a style of leadership that can now be called presidential. He snickers and swaggers his way out of tight spots and relies on common wisdom and conviction to make big decisions. He also carries a big stick in the form of Waite, a sharp-shooting veteran of the U.S. cavalry who has been trained to follow orders and kill. Having Waite at his side undoubtedly makes the big decisions seem smaller. As Spearman knows, and as the films reveals, Waite is the “gun hand” par excellence—a western’s equivalent of the smart bomb. Thus, rather than go the way of the victimized native population, Spearman devises a neoconservative strategy. In order to uphold the rights of free-grazers everywhere, he’ll take his fight to the enemy and reform the town in the process. In his own terms this amounts to making a stand on Main Street. In the language of realpolitik, Spearman is planning a coup d’état that will decapitate the town’s regime and provoke an uprising of the oppressed.

Even by movie standards, the strategy has the makings of a misadventure closer to Don Quixote than the Administration’s groupthinkers. If Spearman avoids the fate of his forebears, it’s because he doesn’t let ideology infect his thinking too deeply. Before he and Waite start shooting up the place, they take the trouble to win over a few hearts and minds. Waite seduces the local diamond in the rough (Annette Bening), and Spearman delivers a sermon or two on the subject of standing up to tyranny. He also doles out chocolate bars, cigars, and whiskey rounds—staples of successful occupation—and gathers intelligence vis-à-vis a haggard, overaged stable boy. Ironically, these strategic inroads are the byproducts of deliberation rather than displays of overwhelming force. Spearman and Waite are in no rush to bring on the denouement. They would rather excuse themselves (temporarily) from combat on account of bad weather and withdraw to Bening’s breakfast nook to sip tea and reminisce over lost innocence.

As it turns out, Spearman and Waite are sensitive souls with a lot on their minds. The impending showdown isn’t just an opportunity for target practice; it’s an occasion to savor what’s left of life with philosophical asides. In one of these, Spearman hears confession from Waite as the film momentarily strays from the tropes of western cinema into those of Vietnam. Fixed in a thousand-mile stare, Waite describes villages of “women and children” he massacred during his tour in the cavalry. When the showdown finally comes to a head, Waite’s military experience proves to be a somewhat mixed blessing. In the blur of combat, he goes from heroic marksman to summary executioner, at one point preparing to finish off a disarmed youth with a point-blank shot. Haunted by the specter of brutality, Waite stays the death sentence, but the film’s central question hangs in the air: To kill or not to kill? Some would say such questions have no place in a western. These movies exist as sanctuaries for gratuitous violence, not existential crises. That, in part, is why the western has always provided a politically expedient cover for warmongering. It sanitizes the notion of collateral damage by blurring the lines between killing to live and living to kill. As Fahrenheit 9/11 astutely points out, “smoking out” the enemy sure sounds better than “carpet-bombing” it.

Open Range , therefore, doesn’t exist to endorse the Bush view so much as broaden it. It shadows the presidency like a doppelgänger—that troublesome id containing all the skeletons Bush Out West was designed to suppress. But it looks like the id has begun to surface. As Bush himself recently opined, Operation Iraqi Freedom has been a “catastrophic success.” Some might call that the military assessment of a commander-in-chief, but it sounds closer to a bad film review.