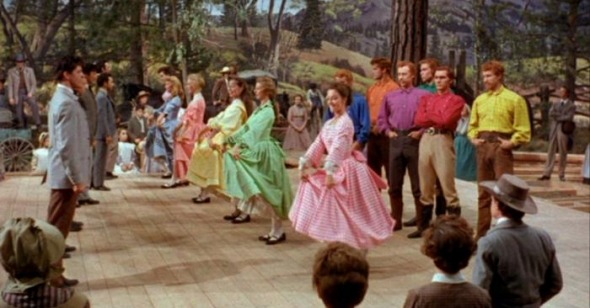 Manifest destiny is a conceit that has seemed to suffer a meddlesome perversion in recent decades. What was once the credo of American progress and growth has become a mission to divide and conquer, both inside and outside our own borders. And where better to turn for a little contemporary understanding of America than a film that presents 1850s Oregon with all the Technicolor pomp and lumberjack circumstance of an overblown 1950s musical? Musical maestro Stanley Donen’s Seven Brides for Seven Brothers should be little more than an allegorical artifact of suburban sprawl and postwar gender reform, its implications grounded in a specific social time and place, certainly made defunct and altogether laughable with the coming of feminism. A musical comedy about a gaggle of rough-and-tumble mountain men coming into town to kidnap themselves wives fer kissin’ and cookin purposes? An avalanche snowing them all together in one mountain shack, with love blooming unexpectedly along with the spring? The biggest shotgun weeding ever filmed? How could this possibly be socially relevant in an age of sexual harassment laws and Sex and the City?! And yet, somewhere between the barn-raising and the lynch mob, Seven Brides for Seven Brothers reveals far more than merely where we’ve been. It reveals just how little we’ve evolved, even as our expansionist tendencies still thrive. Then, as now, “the victor gets all the loot,” whether that refer to the film’s titular brothers’ quest for brides, or our contemporary national tendency to invade and conquer.

Adam Pontipee (Howard Keel), coming to town to shop for supplies and an Eve, only to find the pickings slim, bemoans in the film’s opening number: “Pretty and trim but kinda slim, heavenly eyes but oh that size! She’s gotta be right to be the bride for me. Bless her beautiful hide, wherever she may be.” Adam, however crude in his execution, is just looking for the ideal woman, and all the contradictions contained therein: the ability to be simultaneously strong and meek, hardworking and feminine, equal parts independent thinker and domestic goddess. In our contemporary beauty culture, this dichotomous myth is still going strong, the eternal search for that next “beautiful hide” (wherever it might be) being played out on a daily basis on celebrity-driven tabloid television and in the glossy pages of magazines, perpetually reinforcing the cultural expectation that women must strive not only to have it all but to be it all.

Adam and his biblical brethren (Benjamin, Caleb, Daniel, Ephraim, Frank[incense], and Gideon) might all be backwoods misogynists of the highest order, but the film purports that they’re all a queer eye (or strong feminine influence) away from manners and matching gingham. This easy depiction of reform, turning the brothers from savages into saints in the span of a few musical numbers (their “Lonesome Polecat” lament representing the apex of this contradiction as alphamale manual labor is presented in stark contrast with “feminine” heartache and longing), is barely a stone’s throw from the ideological filter we encounter in America today. We are a nation that, above all, fears admitting that the natural binaries of our society exist, whether they be racial, sexual, political, gendered, or religious.

Welcome to a return to conservative optimism, American style. After all, we’re the kind of country that goes out and takes what it wants, no please or thank you necessary but still finds it hard to fathom that we’ve gotten any dirt under our proverbial fingernails doing it. Sometimes, as Seven Brides for Seven Brothers inadvertently articulates, ignorance really can lead to bliss.

Case in point: Adam rationalizes his encouragement to send his homosocial brothers off to kidnap wives of their own through a rather loose interpretation of the story of the Sabine women. And where exactly did Adam read this inspirational tale, which recounts a Roman troop hauling away some feminine spoils of war, much to the kidnapped ladies’ delight? Why, in one of the books his wife Milly (portrayed with equal parts abandon and moxie by Jane Powell) sought to educate his illiterate clan with. Then, as now, it all comes down to a matter of perspective. What most would read as a tale of rape and exploitation, Adam simply sees as “such downright domesticity,” with the formerly “Sobbin’ Women” now “with a Roman baby on each knee, named ‘Claudius’ and ‘Brute’.” While this sort of logic is undoubtedly disturbing, the concept that the Sabine women “kept occupied by sewin’ lots of little old togas for them tots and sayin’ ‘someday women folk’ll have rights,’” while being secretly “overjoyed” with their captive servitude, is truly not that far off the mark from our current shifting views on occupation.

One need only point to the incensed Democrat-cum-Republican Senator Zell Miller in his recent keynote address at the Republican National Convention to see the sometimes confusing distinctions that, more often than not, comes down to simple semantics. Miller, at the peak of his Scanners-worthy apoplectic rage, put forth the accusation that “today’s Democratic leaders see America as an occupier, not a liberator.” Despite the fact that this distinction is one that the Republican party hasn’t been terribly clear on themselves (the “O” word has been tossed around liberally by both parties), the difference in definition doesn’t seem nearly as important as the need for Zell to make the distinction in the first place. Surely, the Pontipee brothers, too, saw them as liberators of their brides-to-be. Surely, the potential brides in question (though ultimately succumbing to love and “occupation”) didn’t quite agree. And yet, the whole mess ends with a union as implausible as it is necessary. Hollywood ending? Sure. But isn’t that what we’re all striving for?

Ostensibly, Seven Brides for Seven Brothers is the most uncanny of love stories, sure to horrify feminists (“I don’t know yer name, but I’m a-stakin’ my claim, lest your eyes is crossed”) and chauvinists (“Keep yer fishin’! And fightin’! And cussin’! And trappin’! ‘Cause we’re goin’ COURTIN’!”) alike even as it inexplicably wins them both over. While this might be a far cry from national unification, it does represent something of an exaggerated start. For as inane as the narrative logic of Seven Brides for Seven Brothers might seem at first glance, the pairing of a healthy dose of Dubya’s good ol’ boy persona and the promise of gender progression in the presence of one such as Teresa Heinz Kerry is premeditatively woven into every filmic frame. There is no argument that the centerpiece of the film is choreographer Michael Kidd’s 20-minute gymnastic ode to lumberjack brawn and masculine bravado, still exhilarating in the era of bullet time and wirework, but Seven Brides for Seven Brothers still exists as a sly example of the musical genre’s subversive ability to infuse spectacle with meaning. There is a message about compromise to be found buried beneath Donen’s matrimonial hijinks, a term that we as a society have had little use for in recent decades and America has never truly embraced. As Seven Brides for Seven Brothers sweetly reminds us in its own simpleminded fashion, manifest destiny is about social expansion rather than encroachment. And, for a musical that in most contemporary viewing scenarios smacks of regressive ideals, that seems pretty progressive.