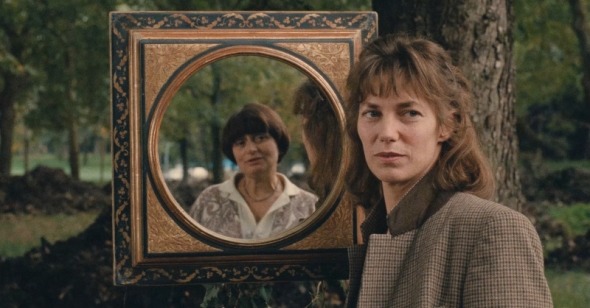 Not loving Jane Birkin is the moral equivalent of a war crime these days, but her presence on film can often feel leaden and, frankly, a little boring. Directors, mostly men, have had trouble giving her roles that take her beyond her flighty, space cadet persona—think of Michelangelo Antonioni (Blow-up), or her lovers Jacques Doillon (La pirate) and Serge Gainsbourg (J’taime moi non plus). They seem infatuated with her, forcing her to strum the same soporific, mid-coital note that “J’taime moi non plus…” immortalized her for.

An exception to this was Agnes Varda’s Kung-Fu Master (1988). It’s a troubling film, wherein she plays a divorced mother pushing 40 who falls in love with her daughter’s 15-year-old male friend. It grew from a ten-page short story that Birkin had penned but was reluctant to show to anyone until she found a confidante in Varda. The film would veer into being an outright apologia for pedophilia if not for Birkin’s performance of quiet agony. Varda does not simply rely on Birkin’s charisma here as other directors have, but shapes Birkin’s performance into one of obsession bordering on pathology. Together, Birkin and Varda show us how this woman is so parched of affection that she normalizes lusting after a child.

Varda was clearly attuned to Birkin’s strengths, along with her limitations, in a way other directors weren’t. She all but exposes those shortcomings in Jane B. par Agnès V. (1988), a docudrama created concurrently with Kung-Fu Master. Filmed over the course of a year during which Varda camped out in Birkin’s house, the film is like Varda’s scratchpad, arranged as a series of small screen-tests for Birkin to try out different roles and see how she fares in them. Birkin is actively terrible in a number of them—Tarzan’s Jane, Joan of Arc—and she isn’t shy about telling Varda that she hates playing them. But she’s more at ease in others, such as the Laurel to Varda’s Hardy or Ariadne of Greek mythology. To Varda, Birkin is the queen of paradox. She wants the boons of stardom—money, glamour, fame—without its liabilities.

Jane B. par Agnès V. is an elliptical film, and, like other Varda films (La Pointe Courte, Jacquot de Nantes), the line between the fictive and the real is deliberately porous. Snippets of Birkin speaking candidly about her own life as a schoolgirl growing up in the United Kingdom are interrupted by fantastical passages, such as images of Goya paintings with Birkin as the subject that gradually sprout to life. The film was born out of Birkin’s own fear about turning 40, an age when she didn’t find herself beautiful. Varda, eighteen years her senior, scoffed at such a suggestion, finding 40 to be the perfect age for portraiture. What emerges over the course of the 90-minute film is a rendering of Birkin as a woman who’s simultaneously self-possessed and insecure. When Varda puts the fictive alongside sequences in which Birkin opens up her private life, one is tempted to see Birkin not as an exceedingly limited performer, but an actress who is fascinating even when cast against type.

The typical read of Jane B. par Agnès V. is that it anatomizes the relationship between a director and subject. It bears noting that this is typically gendered as a male director turning his camera on a woman. The power dynamic between director and subject is usually cast in simplistic terms: the director is the puppeteer, forever in control; the actor is the marionette, beholden to a director’s whims, desires, and visions. It follows that most critics tend to speak of this film as if Varda is the active orchestrator, while Birkin is the passive subject to be framed.

But who, really, is the author in Jane B. par Agnes V., and who is guiding whom? Writing for the New York Times last year, Glenn Kenny suggested that the film is an “exchange of notes” between women. Watching it again, I am tempted to go a step further and suggest that the film assumes a richer meaning altogether when we invert this relationship: recast the film as one in which Birkin is the author, guiding Varda into a cogent directorial vision. This is an assessment Varda gestured toward earlier this year in Newsweek, positing that “it’s Jane B. by Agnes V., but it's also Agnes V. by Jane B.”

Varda is omnipresent in the film. The first time we see her is just after the three-minute mark; with her characteristic bowl cut and quietly intimidating demeanor, she’s sitting in a café waiting for Birkin, who strides in wearing a blazer and jeans. They trade words about whether Birkin likes being filmed, and Birkin responds that she likes relating to her directors. She codes the director as a he, an acknowledgment that she’s signed up for a different ballgame with Varda. Birkin then confesses that she doesn’t quite know the “rules of the game,” the proverbial game being the process of acting on film. Of course, the mere suggestion that this exercise is guided by “rules” is somewhat comical, for Varda effectively eschews any rules that govern making a biopic. Sometimes she gives too much and can’t tone it down, Birkin says. Other times, she is too much herself, and directors tell her she should stretch. This admission reminds us that Birkin has worked with directors who have never felt that her performative instincts will suffice. In Varda, she has found a director who trusts those instincts, so much that she deems them worthy of documenting for ninety minutes.

Varda, though, is as much the subject of the film as Birkin. Just after this initial meeting, we pan to a garden where Varda is coaching Birkin into the frame, filming her against a mirror. Varda reminds Birkin that she won’t be alone in the mirror; there’ll be the camera, along with Varda herself on occasion. “Too bad if I appear in the mirror or the background,” Varda warns. Peel away the coatings of artificiality and one realizes that Varda is, in effect, always looking at herself.

Eventually, the film begins to read like a form of cinematic journaling, Varda’s own private diary she is sharing with us. The most arresting passage comes midway through, when Varda launches into a monologue about a fantasy she’s harbored since childhood, one that informs her fixation on Birkin. She recounts a memory of hearing, as a teenager, about a drowned woman in the Seine—a corpse drawn from the river so impossibly beautiful that a death mask was made of her visage, leading, eventually, to copies of it being produced. This Mystery Woman of the Seine sold so well that Varda herself even bought one. She wanted to contemplate the decedent’s smile, “a smile as enigmatic as Mona Lisa’s.” Had the woman been happy to kill herself, Varda wondered? Or did the morgue worker handling her body force her mouth into a smile for the purposes of the mask? Varda clasps her hands unknowingly as she says this. “No one knew anything about her, so they fantasized about her. She was a nobody who was a somebody,” Varda mutters. “I wonder if the only true portrait is the death mask.”

As she recites these memories, Varda sets the woman’s clay-plastered bust against a body of water before the background turns black. The head turns into Birkin’s disembodied one, and Birkin then recites her vitals—name, age, height—as if a model at an audition. “No exceptional talents, but I’m here,” she opines. After this scene, Varda cedes much of her authorial control to Birkin, and the remainder of the film documents the germination of the subsequent Kung-Fu Master.

There are a number of tempting parallels to draw between this anecdote and Birkin’s own public image; they’re almost too easy. Birkin is the Woman of the Seine, forever at risk of being reduced to a cultural commodity, unwittingly forced to smile even when she’s unhappy. Though this film is nearly 30 years old, these words take on even more urgent meaning today: Varda somehow anticipated that Birkin would continue to be treated as a product, her uniqueness ultimately diluted through the ubiquity of her visage.

Implicit in this passage is Varda’s own mortality, too. What will Varda’s death mask be? A current running through so many of Varda’s films, from Cléo from 5 to 7 (1962) to Vagabond (1985), is how women reckon with the consistent external threats to their own survival, forces that draw them closer to death. Will Varda’s legacy be reduced to a set of pat and tidy cliches—of her as the lone woman in a filmmaking landscape flush with men, the “Grandmother of the New Wave” who remained constant in her feminism?

Jane B. par Agnès V.’s detractors complain that it is ponderous and meandering, and those who don’t find Birkin all that compelling a subject may agree. Recast the film, then, as one in which Varda is asking Birkin for help in creating a self-portrait, peering endlessly at this other woman to give meaning to her own inchoate desires as a filmmaker. Here, a clear portrait of Varda emerges: as a director who is giving and generous in spirit, as an artist unapologetic about putting her obsessions to film, as a woman who is attentive to the insecurities that other women face because she knows them all too well herself. Varda is staring intently at Birkin to reveal something other filmmakers had struggled to unearth. But the mirror is always there, too.