One Sings, the Other Doesn’t 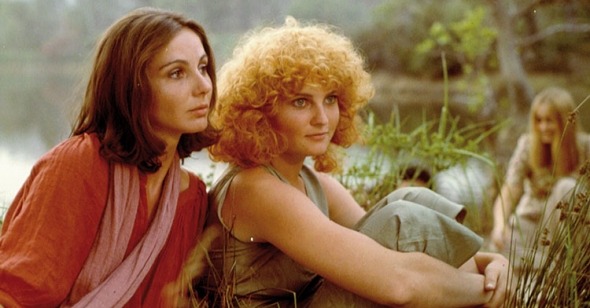 It Takes Two
Michael Koresky on One Sings, the Other Doesn’t

The melodic title One Sings, the Other Doesn’t (L’une chante, l’autre pas), with its beautifully bifurcating comma, describes a movie so steeped in dualities that you can practically see a dividing line in every shot. Agnès Varda’s 1977 film is concerned with two women, two eras (the sixties and seventies), two options for living (married domesticity and life on the road), two political modes of thought (vocal leftism and conciliatory liberalism), and it constantly, implicitly wrestles with two aesthetic options, Varda’s well-honed experimentation on the one hand, and, on the other, a behavioral and visual realism more common to French cinema of the era. The film, a sort-of musical about the decade-spanning friendship between two women, ultimately finds Varda in a relatively commercial mode: this is a project designed to attract a wider, specifically female, viewership than she ever had before. But its accessibility doesn’t indicate the sacrificing of any political rigor.

In a Cineaste interview in 1978, Varda touched upon the two choices she had in making this film: “In politics, or as feminists, there are different ways in which we can work. If you want to make a feminist film, you can work outside the system, in the underground, and you can make a very radical statement, but even if your message is very good, you will reach perhaps five thousand people. You will never reach the mass of women.” One Sings, the Other Doesn’t may ultimately be gentle in its politics, but Varda could probably never make a truly mainstream film: her artistry is too exquisitely singular, too intrigued by moments out of time and the unspoken words between people that can only be expressed through abstraction.

Starting in 1962 and ending in the film’s contemporary, mid-seventies moment, One Sings, the Other Doesn’t charts the gradual path toward women’s liberation in France via the relationship between Pauline (Valérie Mairesse) and Suzanne (Thérèse Liotard). In retrospect, the film’s initial passage is almost unrecognizable in temperament and aesthetic from the rest of the film: set in 1962, the first section, subtitled “Jerôme,” kicks off with a stunning montage of black-and-white photographs of women—young, old, pregnant, topless or clothed, all staring directly into the camera—before introducing us to Pauline at seventeen. In the first scene, Pauline happens to see a framed image of Suzanne, 22 years old, posing with two children, in her neighborhood photography shop, and recognizes her as an acquaintance from years ago. After she judges the photos as potentially exploitative—assuming that they are in some way abused women—the photographer and proprietor of the shop, Jerôme, informs Pauline that the subjects were all complicit, and that Suzanne is a particular case: he lives with her, and the children in the photo are theirs. Immediately Varda forces us to confront questions of control around the photographic image: the women in these frames, captured in the world of the film by a male artist, exist to be looked at. Yet Pauline is the one who’s looking—and commenting on them—and we are aligned with her perspective. And as the film opens with these striking images of various women, they seem to speak to the essence of Varda’s work; she claims them. These represent her naked truth, not Jerôme’s.

When Pauline reconnects with Suzanne, she finds that she is tired and depressed, pregnant for the third time while unsupportive Jerôme is tied up in his own failing photography career. Suzanne, overburdened by domestic life at such a young age that she seems weary and wise beyond her years, desires an abortion, although she cannot afford one and doesn’t know where to go to secure one. Engaged as if she were taking on a political cause, the more free-spirited Pauline lies to her parents that she needs money for a choir retreat and instead spends it to procure the procedure for her friend.

The dark-haired, wan Liotard and the bright-red-coiffed Mairesse will be united and separated many times over the course of the film’s years; emphasizing their physical differences, Varda often places Liotard in more recognizably realist environs and Mairesse in whimsical, colorful settings and scenarios. Pauline’s sureness of herself feels preternatural, as even at seventeen she stands up to her father’s patriarchal rule, barely flinching when he slaps her across the face during dinner. Suzanne, meanwhile, finds it difficult to part from Jerôme, liberated only through tragedy when the disgruntled artist hangs himself in his studio, precipitating the end of the first act.

The film jumps to 1972, and to an event that references an important political awakening in Varda’s life. Suzanne and Pauline, who has renamed herself Pomme, reunite in the crowd outside a courthouse, protesting the trial of a girl arrested for having an abortion after being raped. This is a recreation of the abortion trials in November 1972 in the Paris suburb of Bobigny, which Varda cites as having finally radicalized her into true feminism after gradually coming to it over the course of many years. Having lived and made some of her most searching, radical films in California throughout the late sixties, Varda wasn’t able to participate in the events of May ’68 in France and thus identifies 1972 as more of a political turning point for her and for French women in general. She said of One Sings, the Other Doesn’t, “If there is a struggle going on in the film it’s the struggle for contraception, for the liberation of women’s sexuality and women’s bodies. In the history of this struggle, Bobigny is more important than ’68.” In fact, the film bounds over 1968 completely, leaving it as an implicit memory for characters and viewers alike.

Joining the Bobigny protests—which were also famously attended by Simone de Beauvoir—was particularly galvanizing for Varda, as 1972 was also the year that her son Mathieu was born, temporarily sidelining her film career, causing her to try to find new ways of juggling family and professional life. Her first method was to make a movie—the documentary Daguerréotypes—right in her neighborhood, filming denizens and shopkeepers of her street, Rue Daguerre, traveling only as far as an electrical “umbilical” cord would allow her. It was during this time that she also began to conceive of One Sings, the Other Doesn’t. Her plans for this, her most overtly feminist feature, made male producers wary—a potential funder told Varda he didn’t want to invest in the film if the men came off as foolish, and claimed to be upset that in the script the male characters didn’t have enough screen time.

Such responses clearly necessitated a film such as Varda’s, which concerns itself more with women’s friendships, bodies, and professional and political options than with heterosexual romance, and thus pointedly, crucially delegates men to supporting (often non-supportive) roles. By 1972, Suzanne is a single mother; her daughter, Marie, is now 13; son Mathieu is 11. We learn in flashback that, after Jerôme’s suicide, Suzanne moved back to her parents’ farm with her kids; following this “frozen time,” she learned to type, which brought her secretarial work, and this in turn led her to a job working in a women’s medical clinic. Meanwhile, ever free-spirited Pomme, with whom Suzanne has kept in touch via postcard, is engaged to an Iranian man, Darius (Ali Rafie), and has followed her love of music into a career in protest folk pop; we—and Suzanne—first see her perform at the demonstrations in Bobigny (“My body is mine,” goes a recurring lyric). With her eternally frizzy hair and brightly colored clothes and scarves, Pomme appears reminiscent of the semi-fictional character played by free-spirit Viva in Varda’s 1969 Lions Love (… and Lies), though is her polar opposite; in that in-the-moment counterculture document the youth movement had atrophied into political stasis in the face of social turmoil, barely even able to get out of bed. Pomme is a cheerful, proactive heroine: now, with a backward glance, Varda sees hope for the future, evidence of incremental social progress.

Pomme’s musical numbers, the lyrics of which were all written by Varda, contain the film’s most direct political address. Most are restrained, with the occasional outrageous flourish: in one performance, she performs a song claiming her own gender fluidity while riding the shoulders of a man hidden by a cape, looking like a stilt-walking giant, topless, with glitter-glam makeup and a pregnant bulge. Often the numbers exist within the reality of the film, performed in studios or town squares for bemused locals, though there’s a nondiegetic number sung by Pomme on a boat during a trip to Amsterdam, where French women were able to go for abortions. Varda says she made the film a musical in part because it’s hard for one’s film to be taken seriously when quoting Simone de Beauvoir or Marx and Engels in dialogue. The result gives the film a kind of joyful madness, a way of confronting important, fraught political territory by adding a layer of distance between audience and polemic.

After plans for one of her more elaborate shows falls through due to a male funder with cold feet (recalling the initial reticence around the film’s own producers), Pomme takes a break from her music and accompanies Darius to his home country, where they marry and have a child. The footage Varda shot in Iran—some of which was also used for a concurrent short, Plaisir d’amour en Iran, starring Mairesse and Rafie—is beautifully ambivalent, at once expressing awe of the sloping, sensual architecture of the Middle East and a critique of the misogyny inherent in Muslim tradition and culture (in an interview from the period, Varda called the country’s sexual politics “disgusting”). Here, Darius, who had espoused liberal feminist ideals in Paris, reveals himself as a traditionally conservative husband, a moment of reality crashing in to Pomme’s temporary idyll. By setting an extended portion of a film that is at its heart about women’s rights in Iran, with its outward concealing and muffling of women, Varda implicitly underlines the lack of gender equality in the supposedly more civilized Europe. Back in France, Suzanne devotes herself to her work at the women’s health clinic, but finds herself fed up when a woman she’s advising refuses to take birth control. Unable to see why a woman wouldn’t want to liberate herself by controlling her body in a way that would be in her own best interests, she is lightly reprimanded by an administrator that her demands only serve to further restrict women, and that by coercing women to better regulate their own bodies she becomes an extension of the state. This is complicated dialectical material, reflecting its maker’s complexly evolving feelings about motherhood. “Let’s not push women toward motherhood, let’s re-invent it!” Varda said in 1978, shortly after the film’s release. “But let’s fight for abortion and good contraception so that we have the right to choose. That’s most important. That’s where women should get together.”

By the end of the film, Varda’s two protagonists each have children. But Pomme has separated from her husband and baby and is back to living on the road; Suzanne has remarried a kind doctor. The final shot, a pan across a bucolic scene of the characters lazing in the grass by a pond, ends on Marie, Suzanne’s daughter with Jerôme, a look of postadolescent anticipation on her face. It’s a moment of ambiguous utopian grace. Marie is now played by Rosalie Varda, the director’s daughter. As we may remember from the opening credits, it is to her whom the film, a gift of hope for future generations of women, is dedicated.