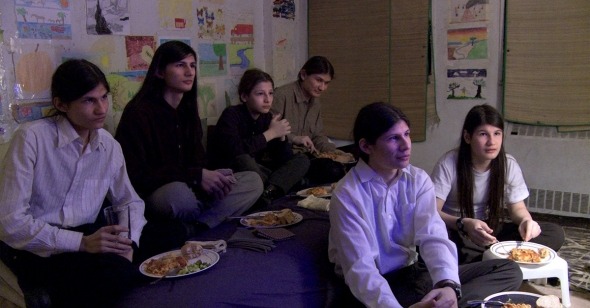 Escape Plan
Emma Piper-Burket on The Wolfpack and Mustang

There’s no clear common ground between a coastal village in Turkey and the Lower East Side of Manhattan, yet they serve as backdrops for surprisingly similarly themed films: Mustang and The Wolfpack. Each follows a herd of same-sex siblings with long flowing hair as they come of age under house arrest. Each deals with the boiling tensions that arise from that confinement and subsequent struggle for freedom. Each was released in 2015 to widespread critical acclaim. And incidentally each is a debut feature by a female director. The striking thematic similarities between the two films provide ample ground to explore the nature of author-subject relationships in documentary versus narrative film. The filmmakers’ adherence to classical narrative conventions plays out differently in each, allowing us to examine the possibilities and limitations of imposing familiar dramatic arcs on unruly subject matter.

Deniz Gamze Ergüven’s Mustang follows five orphaned sisters in a small, conservative Turkish town. When the girls’ exuberance and blossoming sexuality begin to scandalize their village, their grandmother and uncle lock them up until they can be married off one by one. Many of the scenes are taken from experiences or anecdotes the director heard firsthand, but the film is unmistakably a highly dramatized work of fiction. Mustang premiered at the Cannes Film Festival and was nominated for this year’s Academy Award for best foreign-language film. The Wolfpack, directed by Crystal Moselle, won the U.S. Grand Jury Prize for best documentary at Sundance in 2015. It follows six brothers (a younger sister rarely appears onscreen) raised in total isolation, forbidden to leave their New York City apartment. As the brothers mature they begin to rebel by venturing out into the world below. Moselle encountered them on the street during one of these early excursions; after fostering a friendship she was invited into their world and eventually began filming.

In The Wolfpack, as with most documentaries, it is impossible to ignore the relationship between the one wielding the camera and those being captured by it. The brothers are eagerly presenting their world to Moselle, who in turn presents a version of their story to the audience. The Wolfpack is not a film about a group of brothers raised in confinement; it is a film about an encounter between the brothers and someone from the outside: the filmmaker. On the surface the brothers openly share intimate details of their microcosm. And while they speak frankly about their feelings and troubles at home, deeper questions of lasting psychological impact and abuse are grazed against but not addressed. The brothers are undeniably resilient and creative individuals, but by the nature of their interaction with the filmmaker—that is, as a welcome break from their daily routine—they always seem to have their game faces on. Cracks appear, but there is a sense that Moselle is also careful to maintain a barrier of privacy to protect the boys.

Fiction films give their authors the privilege of separation from their protagonists. Ironically, this separation can often offer deeper intimacy, as there is less pressure for fidelity to some perceived truth. In Mustang, Ergüven brings audiences deep inside the girls’ prison walls, and literally into the head of the youngest sister via voiceover. Yet this intimacy is also selective. The characters are given just enough depth to allow audiences to empathize with their ordeal, but no life is implied beyond what serves their narrative purpose. This creates an intense visceral connection between character and audience in the heat of the moment, but once the drama subsides leaves very little to hold on to.

Each film creates a visual atmosphere that draws viewers deep into the world of the protagonists. Ergüven and Moselle use close-ups and loose, circular camera movements to increase the feeling of claustrophobia. The physical intimacy of the siblings with the camera and each other can at times be disorienting. The siblings function as a whole: in both cases they truly form a pack. In many scenes they wear clothes that make them virtually indistinguishable from one another; the girls in their school uniforms and conservative dresses, the boys in their Reservoir Dogs–style suits and shades. Even without the costumes the siblings look alike—they all have the same long, unruly hair, and move their bodies in a kind of overlapping unison that creates the strange effect of not knowing where one sibling ends and the next begins.

In Mustang the beauty of the girls is depicted as wild and lush; just like the plants and vines growing around their house, the girls’ hair, limbs, and laughter intertwine in a heaping mass. The plants indicate both freedom and entrapment, making a dense moat surrounding their prison but also acting as a cover for their escape. The Wolfpack creates texture through the visual grittiness of apartment and surrounding urban environment. That roughness is brought into their home through the films that the boys so hungrily consume and recreate using homemade guns and other props. The harsh language and seething violence of movies like Pulp Fiction, Reservoir Dogs, and Batman Begins infiltrate and overwhelm the confined walls of their apartment.

Both filmmakers often shoot through windows to highlight the contrasts between their outer and inner worlds. The outside is alluring and remote; perched high above the action, the siblings in both films can only look out at all they are separated from. Tension in Mustang mounts, as the girls’ uncle puts up more bars around the perimeter of the house after each infraction, slowly turning the home into an actual prison. In The Wolfpack, frenetic VHS footage that the boys filmed themselves captures a noisy and indifferent world below; they are not a part of it, but by filming it they begin to make it their own. It becomes clear that the camera functions as an escape for the brothers. This was so even before Moselle entered their lives. The brothers are avid film buffs, and their friendship with Moselle was born from a shared love of cinema. Footage from the boys’ well-stocked home video archive is woven throughout the film, adding a narrative layer that is more raw and less performed. Since the footage was made when the expectation of a wider audience did not exist, it gives us the most powerful sense of the messy reality of their days in captivity.

In both cases, the siblings are imprisoned by their families, ostensibly to protect them, though outside dangers are quickly eclipsed by those that arise from confinement itself. It’s important to understand that, yes, the world can be harsh, full of violence, exploitation, and judgment. But these dangers are abstract, while imprisonment is terribly concrete. As is made clear in The Wolfpack, the boys’ father chose to shield his family by attempting to totally remove them from the system. In Mustang, just the opposite occurs, as the girls’ family elders try to force them to adhere and step in line with the moral codes of their community. In each case, the family’s efforts to control fail; the teeming energy of pubescent teenagehood boils over. The central tension in both films exists between the dangers coming from outside and the threats simmering from within.

The siblings’ salvation lies in being together, finding safety in numbers. The titles of both films reveal as much, immediately conveying the strength of the herd. When together, the siblings have an unruly animal power that’s uncontainable. In Mustang, as the older sisters are plucked off one by one for different reasons, the oppressiveness of their prison becomes more and more acute for those left behind. In The Wolfpack one brother goes out alone and ends up arrested, but when they go out as a group they feel emboldened to explore further afield. In spite of the power that comes from their unity, the siblings cannot stay together—in order to survive they must separate and to a certain degree tame their animal nature. Both films show their protagonists cutting their hair just as they are about to break free: for the brothers it’s more of a symbolic liberation, while for the sisters it’s a literal tool of escape—they place locks of their hair on dummies hidden in their beds.

The end of The Wolfpack shows one of the brothers moving out, another finding work on a film set—thus they begin to differentiate themselves. In Mustang two of the older sisters are married off, one has killed herself, and the younger two find a way to escape to Istanbul. The narrative arc of each film seeks a tidy wrap-up. As a work of fiction, Mustang does so predictably, but with ease. The Wolfpack stumbles toward a similar closure but remains more freeform. Real life is messy; it doesn't have a satisfying conclusion because it just keeps going. Many documentaries lose their power when they try to force themselves into classical narrative conventions, adhering to the idea that a story’s conclusion comes when the characters go through some sort of transformation. This convention is suited to fiction because that transformation can be built slowly (though many of the most compelling fiction films also don't adhere to these prepackaged endings). In both cases the filmmakers push their protagonists to conclusive endings. The Wolfpack ends on a family outing to an apple orchard outside of the city; the sun is shining, the mother, father, and sister are also out with the brothers. Everyone is content, the tension drifts to the background, still present but no longer urgent. With Mustang, the remaining two sisters reach Istanbul to start a new life.

Both endings oversimplify the long journey ahead that remains for the characters. We have come to predict this kind of clean ending from a traditional narrative film like Mustang. It’s more jarring in The Wolfpack, as we might expect a documentary to maintain fidelity to the messy and complex realities of life. Many of us still carry into each film a naive hope that we are not being manipulated, even if we are willing to give ourselves over to the ride. Ultimately we all secretly crave, after all these highs and lows, a satisfying conclusion.