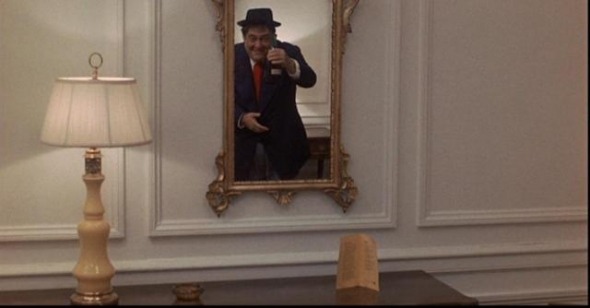 Taking the Plunge
Eric Kohn on The Front

In The Front, director Martin Ritt’s 1976 semi-autobiographical chronicle of the dreaded Hollywood blacklist, veteran actor Herschel “Hecky” Brownstein becomes despondent after the government-fueled showbiz deems him an unemployable Communist sympathizer. Larger-than-life Hecky, elegantly embodied by that quintessentially heavyset theatrical powerhouse Zero Mostel, chooses to end his life with the illusion of class and dignity, encapsulated in his own hermetically constructed fantasyland that willfully ignores the totalitarian forces which deprive him of his art. Ritt and cinematographer Michael Chapman capture the final act, a lethal plunge from several stories above street level, in an eerily fluid long take that spares the gritty details without undermining its dreaded inevitability.

Alone in his primp hotel room, Hecky attempts to enjoy bourgeois pleasures before heading to certain death. He presumably falls onto the harsh Manhattan sidewalk, a collision that has its own metaphorical implications, but the camera avoids the jump itself, lingering on an adjacent mirror where Hecky has toasted his reflection and chugged down a bottle of wine before turning away for his fatal dive. The intangible notion of self-imposed elitism seems eternally sustained in the mirror—until it isn’t. After Hecky leaps away, the shot buoyantly pans to the gaping sill, covered by a billowing curtain unhindered by another death in a world devoid of miracles.

Despite this haunting encapsulation of McCarthy-era desperation, The Front is far from Ritt’s finest work— nor is it his best constructed. It lacks his knack for capturing understated beauty (see Paul Newman in Hud) and quiet tension (most notable in The Spy Who Came in from the Cold), but it manages to succeed mainly as historically inflected reverie. The beef of the plot is carried, in a case of oddball casting, by a reasonably young Woody Allen, shortly before the canonization of his seriocomic nebbishisms in Annie Hall. The Front found Allen portraying the title’s incidental scam artist Howard Prince, an uneducated schmo who agrees to have his name attached to the creative output of his blacklisted screenwriting pals. Given Allen’s trademark proclivity to imbue his line reading with a whiny plethora of stereotypical New York idioms, the idea of Prince as an uneducated whippersnapper hanging out in a crowd of older literary types is somewhat incredulous (“Give me two Hemingways and a Faulkner,” he asks a bookseller when informed of his own feeble background).

Allen’s panache is restrained enough to carry the 95 minutes, and occasionally even reaches an electrified dramatic range that none of his outings as director and star have reached. But most importantly, his starring role still leaves ample room for Hecky’s tragic downfall. Though technically a minor character (he acts in one of the scripts that Prince fronts), Hecky’s suicide becomes a major element in the crowd-pleasing finale, when Prince chooses to defy the House Un-American Activities Committee after being asked to name his late collegue to avoid being put out of the job. Rather than taint Hecky’s posthumous reputation, Prince chooses to be incarcerated, walking out on the committee with a rousing obscenity.

At the time of its release, Gary Arnold criticized this ending in the Washington Post, complaining that the film “…seems to have confused Howard’s essentially furtive gesture, which probably reflects (screenwriter Walter Bernstein’s) desire to tell off the Committee, with the sort of compulsive clowning Zero Mostel demonstrated in 1955. While taking the Fifth, Mostel…would wiggle five fingers.” A reenactment of this scene would still play much better than Howard’s exit lines, even as a shameless grandstand appeal.

But with Hecky’s monumental death sequence, Mostel’s quixotic tomfoolery in the face of unemployment was indeed restored to glory. While much of his theatrical energy in The Front is mercilessly chopped up in unflattering close-ups and scenes where various higher-ups berate his vague affiliation with the disparaged political party of yore, the long take leading across Hecky’s hotel room and following him to the window gave the actor proper spatial range to channel his character’s resigned psyche into a few brief moments of ironic girth.

The scene begins in complete darkness, as a bellboy escorts Hecky into the room, wandering through to turn on the lights. He walks past Hecky, presumably to arrange the bedroom, but the camera lingers on Mostel’s face, which appears afflicted with a manic grin. As the bellboy leaves, Hecky hands him a tip, then wanders to his bed, muttering a vague show tune. Another serviceman arrives, this one pushing a wine tray. Once again, the hotel employee moves into the rest of the room to set up the goods while the camera remains fixated on Mostel, who watches with the same unsettling smirk. And continuing with the repeated treatment, Mostel hands off a tip. The serviceman leaves, and Hecky pours himself some wine, sips, and appearing gratified, grabs the entire bottle. He saunters over to the mirror, and leaves the frame, remaining visible only in the reflection. After muttering a few more lines of verse, he guzzles the wine, formally bids himself adieu and walks away. There is a sharp whooshing sound, and Hecky’s fate is sealed.

During these eerily restrained moments, the character acquiesces to the pressures created by forces beyond his control as the invisible walls of the frame become the restrictive barriers of his frail reality. Hecky’s interaction with his reflection in the mirror represents a dying wish—to perpetually preserve an ethic of optimism, even in the most dour of circumstances. But the reflection is a lie, as Hecky knows too well. His conclusive decision signifies the inherent danger of restricting creative expression. Unable to make amends with his world, Hecky chooses to die locked up in a falsified flight of fancy.