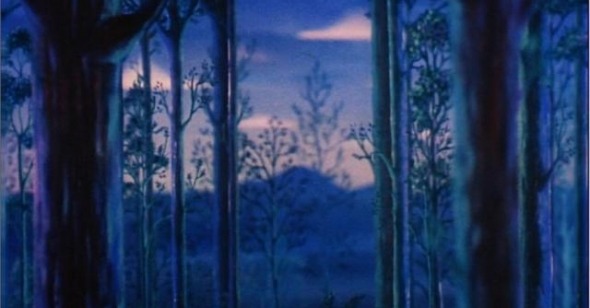 The less charitable have designated Walt Disney’s Fantasia as the ultimate middlebrow movie—reaching for the status of high art by elevating cartoons and lowering classical music and putting them on the same playing field. Does it bring Mickey Mouse to the realm of Stravinsky or vice versa? Is it a truly modern work, or does it just play at modernism, like a kitten pawing at a ball of yarn? Undoubtedly it does reach, grandly and unhesitantly—what’s perhaps most striking about Fantasia is that it still stands utterly alone; like a genre unto itself, or one that never really spawned the imitators it perhaps should have, Fantasia forever remains firmly rooted in its time, defined by its ambition, stuck at its crossroads.

Released onto a largely unreceptive and somewhat befuddled audience only 13 years after the advent of sound cinema, and a mere three years after its creator and central dreamer, Walt Disney, gave the world its first feature-length animated film with Snow White and the Seven Dwarfs, Fantasia was too huge, too much, too soon. It lurched and lunged at its own daunting enterprise, and it was the kind of film that could only have been created when it was. So outsized were Disney’s expectations and proposed cinematic innovations for Fantasia that it was destined to be a commercial failure (initially, at least) and a critical dartboard. For not only did Walt Disney wish to pioneer a new type of entertainment, a “concert feature” (its original title) that would combine the twin sensations of listening to timeless, forceful classical music and watching painstakingly animated wonders into one visceral aural and visual experience, he also wished to pioneer its very means of presentation and exhibition. Seven short films strung together into one deliriously large, looming, self-proclaimed “event,” Walt Disney’s film played well in New York and L.A. initially, but it took years, even decades, for the rest of the world to catch up.

Fantasia, huge in concept, design, and unveiling, stands as the ultimate expression of Disney’s Wellesian, or perhaps Charles Foster Kane–like stature, the work of a genius, with more than a hint of megalomania. In its pre–WWII fortitude, there’s an almost fascistic quality to it, a Riefenstahl-ian fixation on grandiosity: ominously silhouetted conductor Leopold Stokowski’s podium is indeed as mountainous as any of the film’s many imposing rock formations (the seaside cliff on which Mickey iconically perches in Dukas’s “The Sorcerer’s Apprentice,” the mythological Mount Olympus in Beethoven’s “Pastoral Symphony,” the terrifying Bavarian heights of Mussorgsky’s “Night on Bald Mountain,” the setting for Chernobog’s infectiously evil dance of the dead). To equal its mammoth vision, the film was to be distributed through visionary means. Surely, the desire to outdo the enormous success of Snow White must have trembled through the studio, but this was a horse of an entirely different color: Fantasia was representative of an exciting time in the history of cinema, in which filmmakers were reveling in all the possibilities of the medium. Disney’s dream for this personal, 124-minute labor of love was for it to be treated as a showcase for his artists, to move animation away from adorable cherubs and zany animals (though those are in here, too) and into the realm of high art made accessible. The most advanced camera equipment was to be utilized. The distribution was to take the form of a “road show,” for which tickets would be sold in advance, with assigned seating. To approximate the sense of listening to the classical pieces—recorded by the era’s preeminent conductor, Stokowski of the Philadelphia Orchestra—in a grand music hall, Disney pioneered “Fantasound,” cinema’s first use of stereophonic sound: speakers would be placed all around the auditorium, surrounding the audience. Furthermore, Disney wished for Fantasia to be projected on a wider screen than had ever previously been used, but the technical capability for the double-width framed cameras and projectors he had envisioned had yet to be mastered and was far too expansive.

The enormousness of Fantasia reverberates to this day. And the film’s beatific final statement still manages to surprise. In the end, the flurry of images, of clumsy hippo ballerinas, of soaring, multicolored pegasuses, of swirls of glittering fairies and dancing demons drifting and gliding to Tchaikovsky, Bach, and Beethoven, suddenly stops, the tone hushes and becomes contemplative. Fantasia closes on a note of spiritual elation that, both by the sheer audacity of its form and the unadulterated religious surety of its concept, would be nearly unthinkable today. There’s no seeming need for correctness, to please both the restless kids in the audience who might balk at a seven-minute pan through a forest illuminated only by the dim candle lights of a procession of monks, and the multitudes of non-Christians not buying into its iconographies. In all of the animation of Walt Disney, rarely has an image evoked as much rapture as the closing minutes of Fantasia. And never again would it seem acceptable: the animated accompaniment to “Ave Maria,” from Franz Schubert’s 1825 hymn, directed by Wilfred Jackson, is an awesome bit of nonsecular filmmaking in a mainstream context. It’s the underlying religious symbolism in Disney bust wide open, the prayer and resurrection images in Snow White, Pinocchio, and Bambi finally coming to the forefront, cloaked not in metaphor or narrative, but simply faith. Today it has the feel of an unearthed relic.

A Congregationalist who believed strongly that his financial and visionary successes in life were greatly tied to prayer and belief in God, Walt Disney, a native of Marceline, Missouri, otherwise elided outright Christian imagery in his films. Leaning far right in his political views as well, Disney nevertheless had a radical aesthetic streak that belied his intense social conservatism, a contradiction most fascinatingly underlined in Fantasia’s seemingly dichotomous embrace of both God (emblematized in “Ave Maria”’s final lift towards the sky, evoking a controlling greater benevolence) and science—the wholly Darwinian interpretation of Igor Stravinsky’s “Rite of Spring,” in which we see the beginnings of the Earth through to a Godless prehistoric era, is almost as unorthodox for its time as the use of the Stravinsky music itself (he was the only living composer, and his primitivist, neoclassical music was still far from reaching mainstream acceptance). Nevertheless, Disney’s well-documented extreme-right views have eventually darkened perceptions of the “Ave Maria” segment’s generosity of spirit and transformed its reputation into something more like proselytizing, an attempt to squeeze a drop of zealotry into a mainstream entertainment. Yet if we are to believe that Fantasia is indeed Disney’s most personal project, then “Ave Maria,” and the technical audacity with which it’s deployed, might be the film’s ultimate expression of faith in art and symbols, love and hope.

To crystallize this vision, the Disney animators further perfected the multiplane camera technique, which stacked several layers of glass, one in front of another, each painted with a different element of the animated image. Developed in 1933, by Disney’s friend and associate Ub Iwerks—and also famously used by competing animator Charles Fleischer—the multiplane camera, for which Disney was granted U.S. patent in 1940, was not merely a short-cut for animators (it saved endless hours of work because the same backgrounds could be used again and again), it was a showcase for a highly sophisticated three-dimensionality in cartoon filmmaking; the visuals would pan, zoom, and descend into various layers. The effect is something like traveling through an oil painting. Rarely do we think of the camera apparatus when watching animation, yet Disney, whose first ambition was to be a live-action filmmaker, foregrounds camera movement throughout Fantasia, with some 3500 feet of film devoted to all the subtle movements of the multiplane technique.

While other examples of the multiplane camera abound in the early Disney films, most strikingly in the opening moments of Bambi, which uses a single take to burrow into the depths of its forest thicket, one brambled layer at a time, never was it used with more pure, ingenious simplicity than in “Ave Maria.” The attempts to “animate” in the traditional sense are surprisingly minimal: the only moving figures on-screen, a procession of pilgrims marching in a solemn line en route to a place of worship, remain visible far in the background, an eternal long shot. There are no close-ups, which also makes it stand alone from the rest of the segments in Fantasia; it’s devoted to landscape, to feeling, to the shimmering of ripples on a bridge-spanned lake, the gorgeous formations of smooth rocks offset by trees, the eerily glowing blue of early morning. All the other planes of glass remain still; they’re paintings, immobile as stained-glass windows, and Disney and Jackson want you to contemplate that, to wonder about the possibilities of animation, to challenge your perceptions in an era that offered Mickey Mouse and Betty Boop. As Christ’s followers proceed slowly ever right on their way to consecrated ground, the movingly arranged version of Schubert’s hymn fills the soundtrack, and the whole thing approaches the divine.

This procession sequence, shot with long takes and a series of effortless camera cross-dissolves ends in a fade to black, which encroaches ever so slightly from the right of the screen, the robed figures moving into total darkness. (This was the last shoot of Fantasia’s production, plagued by so many problems, including lens mishaps and a literal earthquake, that the final and best take was finished the day of the New York premiere, shot, developed, printed, and rushed to the theater merely four hours before show time.) Here, an angelic soloist chimes in, singing English lyrics written specifically for Fantasia by Rachel Field, and “Ave Maria” fades back in with arguably its most impressive technical feat: a single zoom that begins by approaching an ever increasing sliver of vertical light. It has something of the shape of a cathedral, rising higher as we inch closer. A distant light promises splendor; and when the cells actually do part, we find ourselves in a painted garden. With the sun just beyond, the clarity of dawn almost enhances the effect of the glass. The technique is visible; the leaves do not sway, they remain still, we’re merely zooming through brushstrokes, onward to an elegantly optimistic mountainous horizon, gleaming with the sun’s rays.

Two-hundred and seventeen feet of film, the last scene of Fantasia was the longest single shot in animation up to that point. Not just animation’s, but film’s possibilities course through every frame of Fantasia, and never more thrillingly than in “Ave Maria,” the most harmonious melding of Walt Disney’s religious conservatism and artistic progression, a simultaneous forging forward and holding back. Originally, Disney had envisioned that the final zoom would inch ever closer to the image of the Madonna in the sky; yet even without such a blatant icon, certainly no one could confuse the resulting piece as secular. The power of the imagery here is as undeniable as the sway of a sermon; without a word, the sequence makes you implicit in the seeking of the Virgin Mary’s intercession. Such becalmed religious discourse seems unthinkable now, for better and for worse. “Ave Maria” functions to this day as a haunting artifact of a recognizable yet distant civilization. It's a work of sheer awe. And as awe is often mixed with dread, “Ave Maria” still appears to materialize as a ghost out of the fog—and out of a past when the thrill of innovation could still be blindly entwined with such traditional pathways.